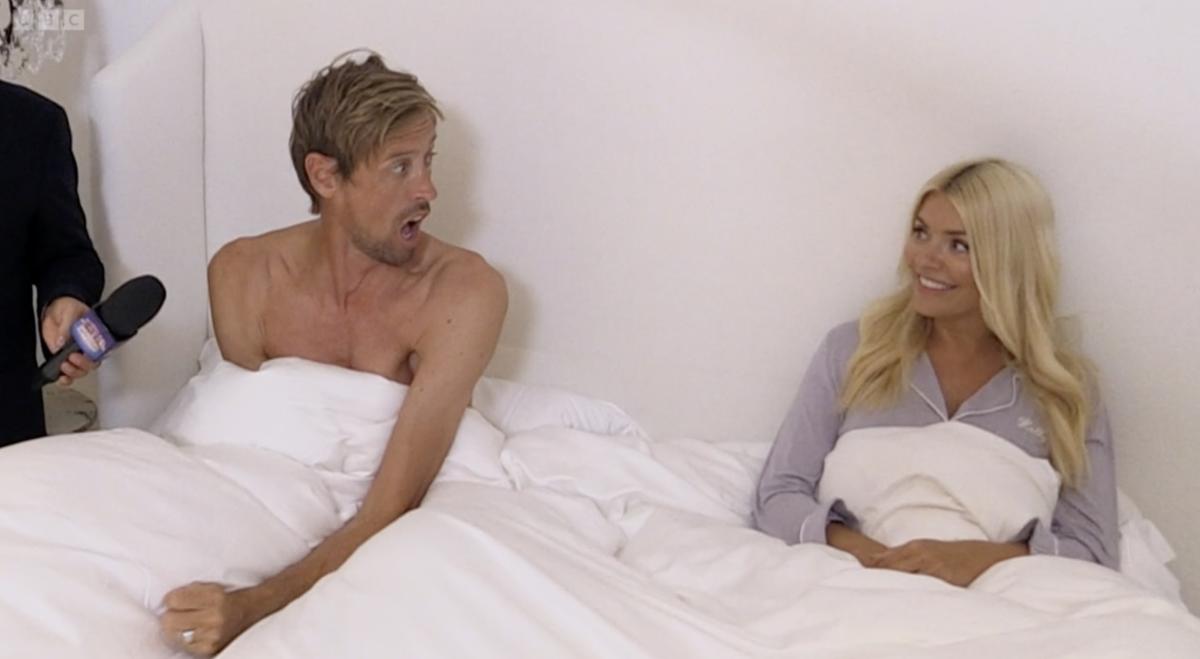 Peter Crouch got the shock of his life after wife Abbey Clancy was replaced by Holly Willoughby in his bed.

The Masked Dancer judge and former footballer had settled in for the evening and was sound asleep when Michael McIntyre burst into his bedroom for his Big Show segment, Midnight Gameshow.

Half-asleep and a little in shock, Crouch was then put through his paces with a series of games which included a visit from Romesh Ranganathan dressed like a robot.

But the biggest shock came in a “spot the difference” game, where the lights were turned off and he was told to see what was different when they came back on.

While he quickly noticed host McIntyre was wearing a green hat, he failed to notice that model wife Clancy had been replaced next to him by This Morning host Willoughby.

After getting distracted by a change in the corner, Crouch was left screaming and diving under the covers when he turned to talk to his wife and was met with Willoughby’s smiling face instead.

“Hi Pete!” Willoughby beamed as Crouch took in what was going on, before simply uttering: “I wasn’t expecting that one!”

“This is weird for me too!” admitted Willoughby, who has been married to husband Daniel Baldwin since 2007.

Thankfully, Clancy – who’s been married to Crouch since 2011 – was in on the game and found the whole thing hilarious, even handing the production team a set of keys so they could get into their Portugal holiday home.

Viewers at home joined McIntyre in breaking down in tears of laughter as the whole thing unfolded, crediting the show for a shock well done.

“Peter Crouch’s reaction to being in bed with Holly Willoughby was absolutely priceless,” one fan wrote.

“I love it. Peter Crouch’s reaction when he saw Holly Willoughby in his bed already is one of the TV moments of the year,” said a second.

While a third cheeky fan commented: “Peter Crouch probably the only man who’d scream realizing Holly Willoughby was in bed with them.”