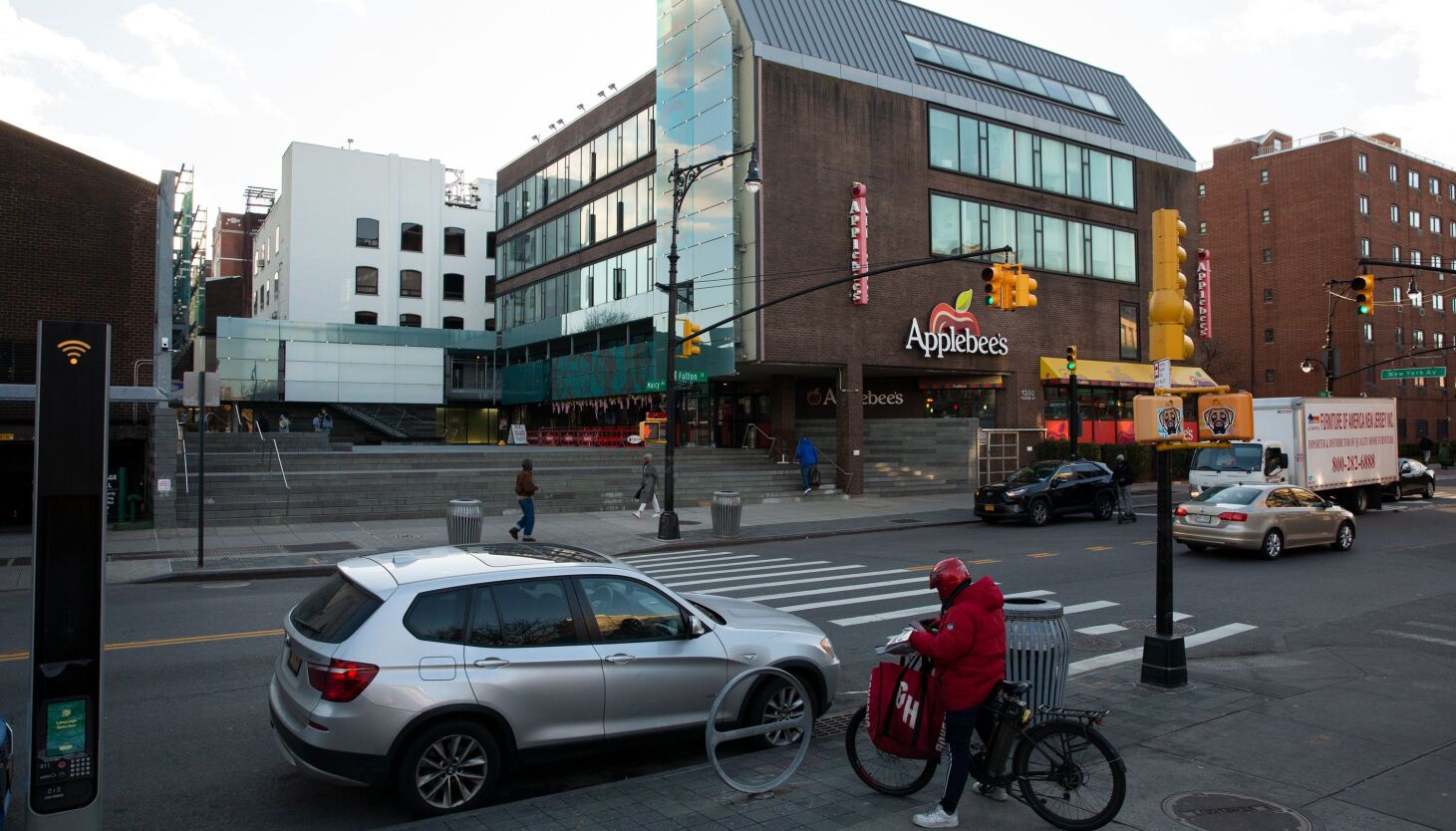 Restoration Plaza in Brooklyn is headed for a transformation over the next decade, creating hundreds of thousands of feet of office and culture space inside buildings rising as high as 16 stories, papers filed Tuesday with the Department of City Planning show.

The environmental review documents provide the first detailed peek at the future of the block of Fulton Street between New York and Brooklyn avenues, for a project first announced in 2019 and led by British architect Sir David Adjaye, who also designed the National Museum of African American History and Culture in Washington, DC

The massive development is anticipated to create 840,000 square feet of office, education, cultural and commercial space in three buildings, the plans show.

A 16-story, 245-foot-high building and a 195-foot, 13-story building would supply commercial space to existing tenants and new organizations, Blondel Pinnock, the president and CEO of the Bedford Stuyvesant Restoration Corporation, told THE CITY in to interview. There will also be a four-story, 120-foot community building focused on current and cultural institutions – including multiple galleries and dance studios.

Bedford Stuyvesant Restoration Corporation created the space half a century ago as an antidote to neighborhood blight, becoming the first community development in the country. It still runs the site and is seen as a model to thousands of neighborhood-focused development groups around the world.

The new buildings will be double the size of current 1970s structures, which are between one and six stories high. But as it expands the plaza, Restoration needs to build higher so it can maintain the plaza that provides a public gathering place badly needed in the neighborhood, Pinnock said.

“In order for us to maintain the level of open space that we have here, we have to build up,” she said.

“We’re really looking at being intentional about the type of programs and the type of business that we want to work with, that can come here and truly create not only arts and culture space and a work environment that will create jobs within creative and technological space,” she said.

The construction will begin in phases, with the 13-story building along the New York Avenue side of the campus getting built alongside the four-story cultural building, with an effort to temporarily relocate as many programs as possible during construction.

The Super FoodTown on Brooklyn Avenue will also stay open throughout the construction, although it will move to the New York Avenue building once that is completed. “There’s no way that we would want to disrupt the ability for people to get food,” Pinnock said.

The estimated cost for the first phase of construction is between $150 and $175 million, she added, and the city has already committed $50 million towards that, she said.

“I think a project as large as this… it’s going to require a lot of hands in order to make this work.”

Construction will take at least eight years, the group estimates. A public hearing on the plan will be held remotely on Feb. 16, at 2 pm The Department of City Planning will accept comments on the projects in writing through Feb. 27.

The grand revamp will still need to go through multiple approvals. It requires a rezoning of most of the block, including a special permit to waive height and setback regulations, according to the application. That review will require clearance from the City Planning Commission and City Council as well as input from the community board and borough president.

Restoration first announced the overhaul in 2019, when the organization tapped “starchitect” Adjaye to lead the project.

A representative for Community Board 3, which has its office inside the plaza, declined to comment without first reviewing the plan. Councilmember Chi Osse, whose district office is also at Restoration Plaza, also declined to comment.

Building on the Past

The history of Restoration Plaza started in the early 1960s, when Sen. Robert Kennedy, with the support of Mayor John Lindsay and Sen. Jacob Javits, created the “special impact program” that provided money for community development projects.

The Bedford Stuyvesant Restoration Corporation then launched in 1967, and a year later the organization bought an abandoned milk bottling plant on Fulton Street as its headquarters, according to the organization. At the time, the neighborhood was reeling from economic disinvestment and dilapidated housing.

The 300,000 square-foot Restoration Plaza opened in 1972, and currently houses the Billie Holiday Theater and local businesses and nonprofits, as well as the Super FoodTown and government offices.

“That plaza was in many ways symbolic of the engagement of the Kennedys and the political establishment in partnering with the community on an idea that was evolving from the community,” said Ron Shiffman, professor emeritus at the Pratt Institute, who helped conceive the Bedford Stuyvesant Restoration Corporation in the 1960s.

The core of the nonprofit — the first community development corporation in the country — was its engagement with the neighborhood, he said. And he hopes the future renovation project will continue that community-driven approach.

Restoration Plaza also been a political and cultural destination. Vice President Kamala Harris held a speech there last year to announce a $1 billion economic investment to spur economic growth in communities across the country.

She told the crowd last summer that she chose the location because it was a “model” of good investment.

“All across our nation there are places like Bed-Stuy — reservoirs of ambition and aspiration — waiting to be tapped,” she said at the time.

Pinnock said that the renovation is “going to be a long haul” and that she expects some people to be wary of the changes. But she also sees it as an opportunity to create jobs and close the racial wealth gap in the neighborhood.

“People have grown up coming to Restoration Plaza. They’ve been coming here for, in many cases, most of their lives, so they know the state of the buildings and the real estate that we have here today,” she said.

“And for many people they’re like, yeah, it’s about time. We deserve something new and something beautiful.”

Get THE CITY Scoop

Thank you for your submission!