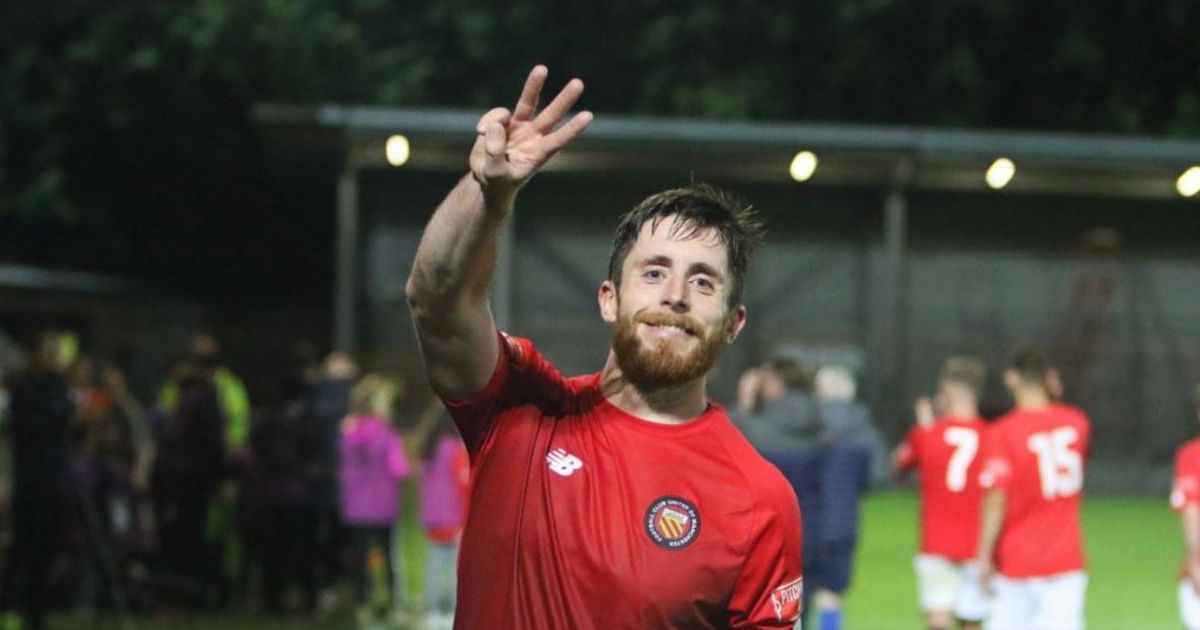 A footballer has told how his girlfriend saved his life when he had a sudden heart attack in bed.

Adam Dodd and his club, FC United of Manchester, shared his story to raise awareness of the crucial importance of CPR. Dodd, 29, told how he went to bed as normal on June 3 but his girlfriend woke suddenly a couple of hours later ‘to the sounds of me in cardiac arrest’.

“My heart had stopped and I was dying,” said the semi-professional footballer, a plumber by trade. “Luckily, she heard my gasping and called 999 and performed CPR until the ambulance arrived 16 minutes later. If I hadn’t received this CPR I would have died or would be brain dead. The chances of surviving an out of hospital cardiac arrest are 3 per cent.

“When the ambulance arrived, they shocked me with a defibrillator and it took a few attempts to get my pulse back. I was taken to Blackpool Hospital and put on the intensive care ward in an induced coma where I stayed for four days. They were worried about brain damage and didn’t know if I would wake up. I have no memory of any of this, but I can imagine how traumatic this would have been for my loved ones, not knowing if I would wake up and if I did , if I would have severe brain damage.”

Left-back Dodd, known by all as ‘Doddy’, has been a stalwart of the FC United starting line-up since he joined in 2019, the club said. He has made 99 appearances in three seasons, two of which were cut short due to the pandemic.

He was in hospital recovering while the team prepared to compete for the Fenix ​​Trophy Final in Rimini, Italy. Dodd said his ‘life was completely turned upside down’. He was woken from the coma on June 7.

“Because of the high-quality CPR I received and the amazing care from the NHS, I am making a good recovery and I am waiting for a defibrillator to be fitted before I can return home,” he explained. I am extremely lucky to be alive and I want to raise awareness about the importance of being CPR trained and people knowing about public defibrillators and how to use them because this is what can save someone’s life. I’ve always been a fit lad and looked after myself and would never expect anything like this to happen to me, but that’s how quickly life can be turned upside down.

“I am not going to be able to work, play football or drive for a while and the recovery process will take time, but I am just grateful to be alive. Thank you so much for all the messages of support, it means the world to me and is helping me on my road to recovery.”

FC manager Neil Reynolds said Dodd, the new club captain, would be fitted with an implantable cardioverter-defibrillator (ICD), which detects any life-threatening, rapid heartbeat and if it occurs, sends an electrical shock to the heart. It’s the same device that Danish international Christian Eriksen had after his cardiac arrest and he’s playing again in the Premier League.

Reynolds said: “Following that surgery though, he is looking at months without any income as a self-employed tradesman, as he recuperates both physically and also mentally as he comes to terms with in his words ‘going to hell and back’.

” A crowdfunder has been set up to support Adam to ensure that his hardship is minimized while he fights to get back to where he was and we all hope make his hundredth FC appearance proudly wearing that captain’s armband.”