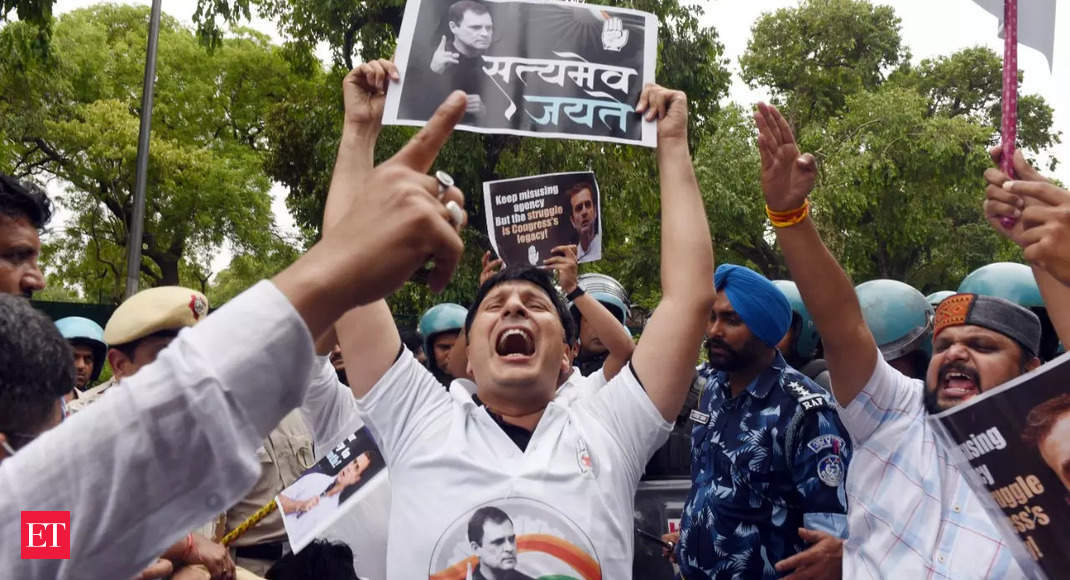 Haryana and Punjab units of the Congress on Monday held protests against the Enforcement Directorate’s summons to their leader Rahul Gandhi in a money laundering probe and accused the Center of misusing investigative agencies to “suppress” the opposition. Police briefly detained several Haryana Congress MLAs and workers when they tried to take out a protest march to the ED office here in support of their leader Rahul Gandhi, who appeared before the probe agency in Delhi.

The party’s Punjab unit, led by its chief Amrinder Singh Raja Warring, also held a protest near the ED office in Jalandhar.

The Congress will continue to fight against the BJP’s “dictatorial and vindictive politics,” Warring said.

However, the police had put up multi-layered barricades close to the Congress’ office and packed the leaders in two buses when they tried to march towards the ED office in Sector 18. They were taken to the Sector 3 police station and were let off after being briefly detained.

Bhan accused the BJP-led government at the Center of misusing central probe agencies to “suppress the voice of the opposition”.

“BJP is playing vendetta politics, but neither the Congress nor Rahul Gandhi will be cowed down by their actions,” he told reporters.

Hitting out at the BJP-led government, MLA Jagbir Malik said, “To divert attention from the people from vital issues, they are indulging in vendetta politics. Rahul Gandhi has been exposing them on various fronts, so they are trying to build pressure, but the Congress party and Rahul will continue to expose them before people on various issues.”

Carrying placards, the Congress workers in Chandigarh as well as in Jalandhar raised slogans against the central government.

In Jalandhar, Warring said the Congress party will continue to fight against the BJP’s dictatorial and vindictive politics.

“We will continue our struggle at all costs,” he added.

He also alleged that the Aam Aadmi Party is the BJP’s “B team”.

In Delhi, a battery of party leaders accompanied Rahul Gandhi to the Enforcement Directorate office for questioning in a money laundering investigation related to the National Herald newspaper.

The probe pertains to alleged financial irregularities in the party-promoted Young Indian that owns the National Herald newspaper, published by the Associated Journals Limited.