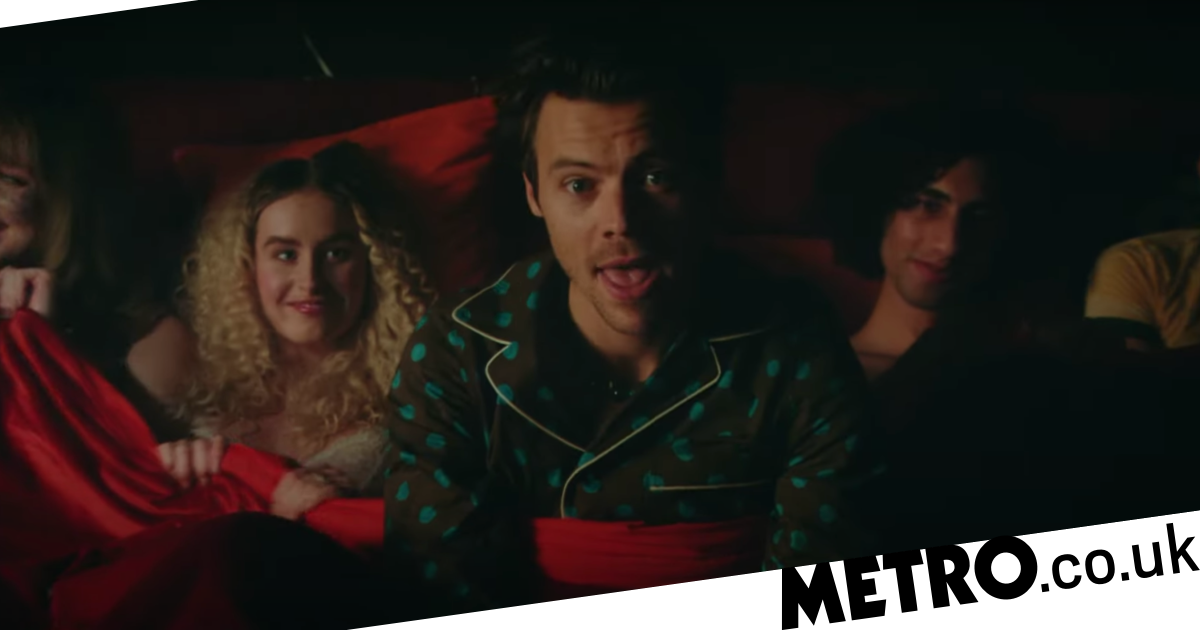 Harry Styles latest music video is here – and it’s bound to put a smile on your face.

A couple of days ago, the global superstar teased his new music video for Late Night Talking from his third studio album Harry’s House, which he’s currently performing hits from during his crowd-pleasing Love On Tour concerts.

The short film has finally arrived, and it’s every little bit as joyous as the song itself.

The video begins with the 28-year-old snoring in bed, before waking up to discover he’s all alone.

In a state of confusion, he looks under the covers before crawling through the sheets in his polka dot pajamas.

Watch the video below!

In the video, after Harry’s initial fuddlement, he finds himself in a scarlet-colored bed, with multiple people lying down next to him side-by-side, beaming at the One Direction star and caring for each other.

There’s laughter and smiles all around, before Harry wakes up in yet another scenario – this time resting on a bed that appears to be part of an art exhibition.

Harry looks bemused as he gazes back at the art aficionados staring at him… but his confusion turns to delight when he’s presented with a delicious-looking bowl of spaghetti bolognese with meatballs.

Harry has a checkered napkin tucked into his suit while sharing his bowl of spaghetti with a fellow diner, before he’s then transported to sitting up in a bed with a woman as they watch a production with binoculars.

Harry fans (aka Harries) will remember when the singer was photographed and filmed riding a bed around London in February this year, spotted outside Buckingham Palace while accompanied by a guitarist and drummer.

Now we finally have the footage to reveal what he was up to, effortlessly singing along to late night talking as cars whizzed by.

The fun continues as Harry takes part in an enthusiastic pillow fight, before officiating what looks like the most relaxed wedding of all time, on yet another, extremely elegant bed.

As rain pours down on the ceremony, Harry’s bed shoots down to earth, as he lays back, worry-free, in the final shot of the music video.

The lead single from Harry’s third album Harry’s House was As It Was, which managed an incredible 10 weeks at the top of the Official Singles chart, making it the longest-running number one of the year so far.

What’s more, the single garnered approximately 95million streams and also became the most physically purchased (11,000 units) and digitally downloaded (33,000 units) song of the year up until that point in the UK.