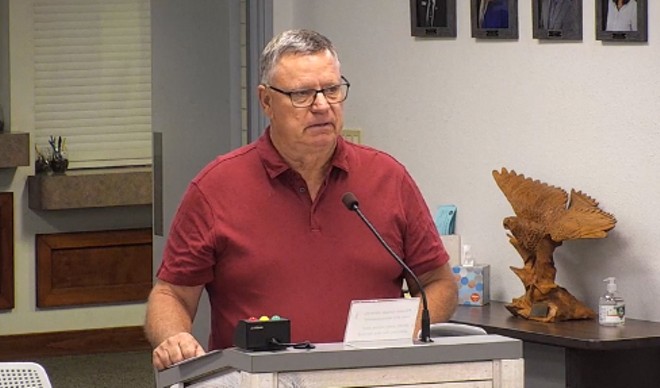 What is the definition of a hotel? The question plagued the Grover Beach City Council, members of city staff, and one frustrated resident who refused to pay transient occupancy taxes (TOT) for two years running.

The group engaged in a two-hour-long heated back-and-forth at the Aug. 22 hearing where short-term rental (STR) operator Allen Thompson attempted to present evidence as to why he was exempt from paying TOT based on his interpretation of the city’s municipal code. He added that City Mayor Jeff Lee told him he didn’t need to pay the tax.

“I told Jeff during the June 3, 2019, council meeting that I had diligently paid TOT ever since the beginning of my short-term rental. He smiled and said, ‘The city of Grover Beach appreciates the money because you don’t have to pay that,'” Thompson said on Aug. 22. “In order for him to make that statement, he had reason to believe that payment of TOT is not required of STR operators. … Mayor Lee has let the cat out of the bag; the toothpaste cannot be put back into the tube.”

Thompson said that he hasn’t charged his tenants for TOT since the end of 2019, adding that he focused on the phrase “tourist home or house” included in the municipal code’s definition of a hotel.

He consulted an English professor about the meaning of the phrase. The professor told him that the phrase is an abbreviation of “tourist home” and “tourist house,” Thompson said, differing from the city’s interpretation of it to mean any house that temporarily lodges people.

City Attorney David Hale said at the hearing that single-family STRs like Thompson’s fall under the definition of a hotel, according to the municipal code. Hale referred to Thompson’s grammar consultant as an “English teacher,” which Thompson took offense to.

“I sought the advice of a professional. Rather insultingly, he referred to her as an English teacher,” Thompson said. “We don’t refer to university professors, directors of their departments, as English teachers. This isn’t just anybody. I asked her about a specific issue. The city wants to interpret the phrase ‘tourist home and house’ as having the standalone word ‘house’ in it so that they can apply this word to me and my single-family residence. She said that’s not what it means.”

Hale told the City Council that staff had requested to audit Thompson’s books to determine how much TOT he owed Grover Beach, but Thompson refused to give them the documents. An estimate from the city tax administrator initially claimed that he owed $15,284.26 in unpaid taxes, interest, and penalties. But an updated calculation as of July 31, showed that sum jump to $16,215.52.

Kristin Eriksson, the city’s deputy city manager, told NewTimes that owners of revoked STR permits cannot reapply for two years. Plus, applications hinge on the availability of permits due to the cap on the total number of STR permits allowed in the city.

“For non owner-occupied STRs, in which the owner is not present during the stay/vacation home residences, such as Mr. Thompson’s, the cap for STR permits is 60 in the non-coastal zone; 40 in the coastal zone,” she said.

At the hearing, staff noted that the city’s system sends out alerts to STR permit-holders when they haven’t paid the tax. Thompson said that he couldn’t be certain if he received them.

“Mr. Thompson was notified in mid-2019 that he was obligated to pay TOT and TMD [tourism marketing district] tax for any rental of his STR,” Eriksson told NewTimes. “Mr. Thompson received monthly notices from Host Compliance throughout 2020 and 2021. In August 2021, city staff also began direct correspondence with Mr. Thompson to attempt to collect on his delinquent tax payments.” Δ