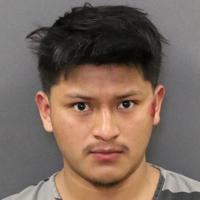 Nineteen-year-old Alonzo Perez, who had an active Hall County warrant, was placed into handcuffs.

GIPD arrived at 2517 Brahma St. at 2:25 am Sunday in response to a noise complaint. There was also a report that the house might be the scene of underage drinking.

Officers gave instructions several times, directing everyone to exit the home. When the people did not comply, GIPD entered the house to clear it.

As Perez was being escorted to a patrol vehicle, he allegedly pulled away from officers. Because he physically resisted his escort, officers had to physically take him to the ground, according to Monday’s GIPD media report.

Perez “was positioned in front of a patrol vehicle where a search was being conducted by his person when he again pulled away from officers and attempted to square up with them,” according to the media report.

Officers again had to take Perez “to the ground to control him,” based on the media report.

He was taken to the Hall County Jail, where police say a search of his person turned up an unidentified substance concealed in a $20 bill.

Perez, who lives in Grand Island, was arrested for failure to appear, obstructing a police officer and first-offense resisting arrest.