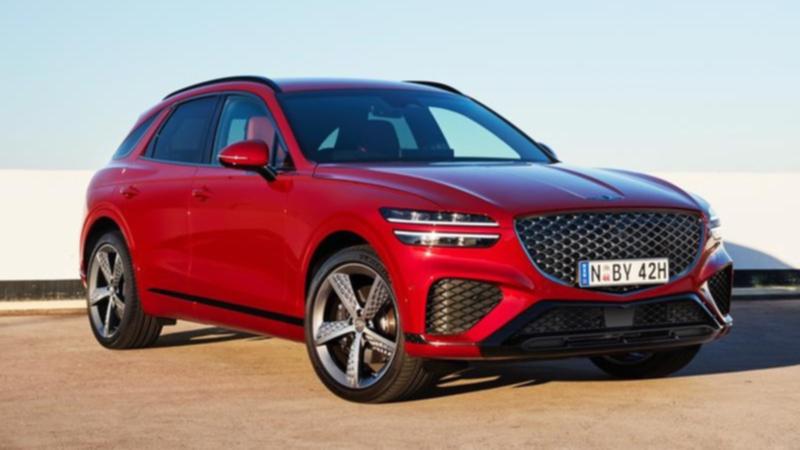 Supermodel Linda Evangelista once declared that “on less than $10,000 a day” she can’t get out of bed. It was controversial at the time, but served to illustrate the indelible link between beauty and money.

So when an automaker suddenly launches three new models, all beautiful and all reasonably priced, to undercut their competition, the auto world takes notice.

Korean luxury brand Genesis, owned by Hyundai, has turned the beauty equals money theory on its head by offering some of the most attractive yet affordable luxury vehicles on the market.

Better yet, they’ve launched three of these machines in a matter of months – first their flagship model, the all-new G80 luxury sedan, followed closely by their SUV equivalent, the GV80, and most recently the smaller, more affordable mid-size SUV, the GV70.

The GV70 is the most affordable and compelling Genesis to date, as well as the most eye-catching. Its design resembles a Jaguar F-Pace in silhouette, a Maserati Levante in the front and even gives a hint of Porsche Macan to its curvy rear.

There’s also a distinctive corporate DNA carried over from the larger GV80.

The GV70 will initially be offered in four configurations – with three engine options and the option of two-wheel or four-wheel drive on the base model.

It’s a stunning example of what this Korean luxury brand is all about – great looks and, in some cases, world-leading technology and accomplished driving dynamics and build standards.

The GV70 will swim in the same pond as established favorites like BMW’s X3, Audi’s Q5 and Mercedes-Benz GLC – undercutting them all on price. But if Germans have cause for concern, it’s Japan’s leading luxury brand Lexus that should be seriously concerned.

The GV70 sits halfway between the Lexus NX and RX SUV models, priced like the former but with the latter’s looks and luxury. That’s a scary combination.

Lexus, which has spent three decades perfecting its niche, has suddenly found itself with a true rival that arose practically overnight. Their battle is not just over the beauty and quality of their vehicles, but also in an area where Lexus has long been a leader – customer service.

The Koreans offer free service for all new purchases for five years, including rental cars. There is a five-year unlimited mileage warranty. Do you hear Lexus?

In early 2022, an all-new, all-electric version is due to join the Genesis fleet, which will throw the cat even further among the doves.

Our test vehicle’s 2.5-litre engine may sound modest, but it delivers compelling performance, with a 0-100 km/h sprint in 6.1 seconds (just a second slower than the twin-turbocharged V6).

It’s a well-resolved powertrain, smooth and quiet, and coupled with a smooth eight-speed auto and balanced, quiet and stable suspension. It feels firm enough to justify that sporty look, yet comfortable enough to match the car’s plush interior.

The interior of the GV70 is a study in tasteful design and luxurious finishes.

Even the basic model gets a full-length sunroof, plus fine nappa leather seats with diamond quilting (heated and ventilated at the front, with massage function for the driver).

They’ve taken a minimalist approach to switching devices, with most functions controlled via a glorious 14.25-inch center screen. That infotainment system was responsible for one of the car’s few bugbears – the two rotary controls on the center console – one dedicated to shifting gears (Range Rover-style) and the other driving the infotainment system.

It’s easy to grab one while reaching for the other, which can result in an accidental radio station change when trying to quickly shift the car from drive to reverse.

The instrument panel is also a fully digital affair and tastefully designed.

But the GV70 not only has a pretty face, it’s also a very smart car.

A friendly woman’s voice not only warns you of imminent road hazards such as level crossings and speed camera zones, the car actually “reads” the road ahead, like a rally passenger, and warns of dangers such as “sharp right turns ahead”.

It also occasionally scolds the driver with reminders such as “Keep both hands on the wheel” or “Keep your eyes on the road” when it senses the driver’s inattentiveness. It is part of an augmented reality navigation system that brings the navigation instructions to life.

Despite its relatively compact size and sleek design, the GV70 offers plenty of passenger comfort and ample cargo space under that sloping rear – 542 liters when all seats are in use, or a roomy 1678 liters with the second row folded forward.

All in all, the GV70 is hard to fault and very easy to drive.

It’s a car worth standing up for.

* HOW LARGE? Along with the X3 from BMW and the GLC from Benz, it belongs to the middle class. Despite its sporty looks, it is quite spacious.

* HOW FAST? The tested version hits the speed limit in 6.1 seconds – a second slower than its high-performance flagship, but more than fast enough for most families.

* HOW MUCH? A rear-wheel-drive version opens the batting at $66,400 plus road fees. Our test car added 4WD for an additional $2000; The high-performance model offers excellent value for money at $83,276.