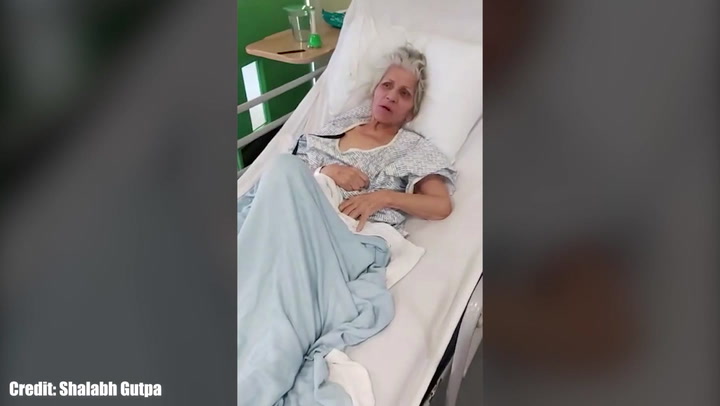 An elderly woman with advanced vascular dementia was discovered “half-naked” and “soaked in her own urine” by her appalled son in a bed in the staff canteen of an acute care hospital in Lanarkshire.

Shocking footage captured by Shalabh Gupta yesterday morning shows his 76-year-old mother Shakuntala Gupta lying on a bed next to the open door of the dining area at Hairmyres University Hospital where staff take their meals.

The space also appears to be used as a storage space for trash cans, boxes and furniture.

When Mr Gupta challenged a nurse, he claimed he had been told the hospital would have to leave for an emergency – and his mother was the only patient moved to the dining area for being illegally in the UK and not entitled to release has NHS care.

The Lanarkshire Live app is now available for download.

Get the latest local news – plus features, entertainment, sports and the latest on Lanarkshire’s recovery from the coronavirus pandemic – right at your fingertips, 24/7.

The free download includes the latest breaking news and exclusive stories, and allows you to customize your page to fit the sections that matter most to you.

He says that his very confused mother, who does not know where she is, has “no privacy and no dignity”.

Mr. Gupta came to the UK from India in 2006 and was accompanied by his wife and two children four years later. His mother lived in India until they moved to East Kilbride in 2010.

When his mother came to them in 2010 on a visitor visa, the family noticed that their memory had deteriorated. She was diagnosed with vascular dementia and her health has deteriorated rapidly since then.

“We applied to the Home Office to allow her to stay with us so we could take good care of her, but nothing has worked in her favor to date,” said Mr. Gupta, who along with his wife and his family Children a British citizen.

“We also submitted a doctor’s report to the Home Office that she was unable to travel and therefore could not return to India. I lost my father in 1996 and there is no other family member to look after her. “

Shakuntala was rushed to Hairmyres University Hospital by ambulance two weeks ago after falling at the family home and was admitted for observation after diagnosing a hairline fracture in her pelvis.

First in a ward, she was moved to a room of her own, then yesterday a shocked Shalabh found his mother in a bed in the canteen. In his video recordings, catering staff can be seen in the kitchen and in the dining area, where she is the only patient.

“She was only wearing an apron with a thin blanket over her and her legs were bare,” he told Lanarkshire Live.

“She was in a semi-naked position and her legs were bared. The door was open, a cold wind was blowing and visitors were passing by. There was no curtain or screen. There was no privacy, no dignity.

She had been in a room with a toilet. Then suddenly she was in a cafeteria. There were people sitting in the café, nurses chatting at tables and chairs. You can’t put someone like that. “

Since being admitted to the hospital, Shalabh and his family have been visiting Ms. Gupta three times a day to prepare the breakfast, lunch and dinner that they will prepare for them. They also gave her calcium tablets – the only drug that hospital doctors have prescribed, according to Shalabh.

“They said that a bed cannot be provided for her because it is illegal and I may face charges. I have universal credit and I also work as a carer for my wife and mother so I can’t pay the fees or NHS fees.

“The NHS was supposed to provide my mother with an orthopedic bed, but they state that she has no confirmed legal status to stay in the UK, so the NHS cannot offer free treatment and a profiled bed or other assistive device.”

Ms. Gupta is incontinent and needs to be spoon-fed. She often undresses due to her dementia, and her family say it is totally inappropriate to leave her in a place as public as a canteen for hospital staff.

Shalabh continued, “She was lying there wet and cold and doesn’t know where she is. If they were missing a room, they could have told us they would fire them. You can’t just throw someone into a canteen.

“I made a formal complaint on the NHS website. She can’t complain. She is a vulnerable adult, whether or not she is a citizen here. If she’s a private patient, if she’s illegal, you must treat her the same way you treat other people. Dumped in a canteen – that’s totally shocking. Why was she singled out? “

After consulting NHS Lanarkshire for comment, Ms. Gupta was taken from the canteen to a private room. Her family believe she was in the cafeteria for about eight hours.

Shalabh told doctors today that he doesn’t want his mother released until she has been examined by a psychiatrist.

Based on Ms. Gupta’s immigrant status, Shalabh claims hospital staff told him they could not provide a profile bed for home care.

“Since we don’t provide any equipment, the risk factor is very high,” he said.

“If she’s in her normal bed, she can just fall on the floor. I have to carry her in my arms to take her to the bath. I’ve been doing that for almost two years. After her injury, it will be” even more difficult. Everything can happen.”

Mrs. Gupta’s niece, Prabhjot Kaur, added: “My aunt wears diapers and it is very difficult for the family to do everything on a regular house bed and take care of their personal hygiene.”

“We regret every case in which someone thinks that we have not managed to offer the highest standard of care. We have a complaints process through our patient affairs team and we encourage anyone to contact us this way if they have any concerns so that they can be fully investigated. “

And did you know Lanarkshire Live has its own app? Download yours here for free.