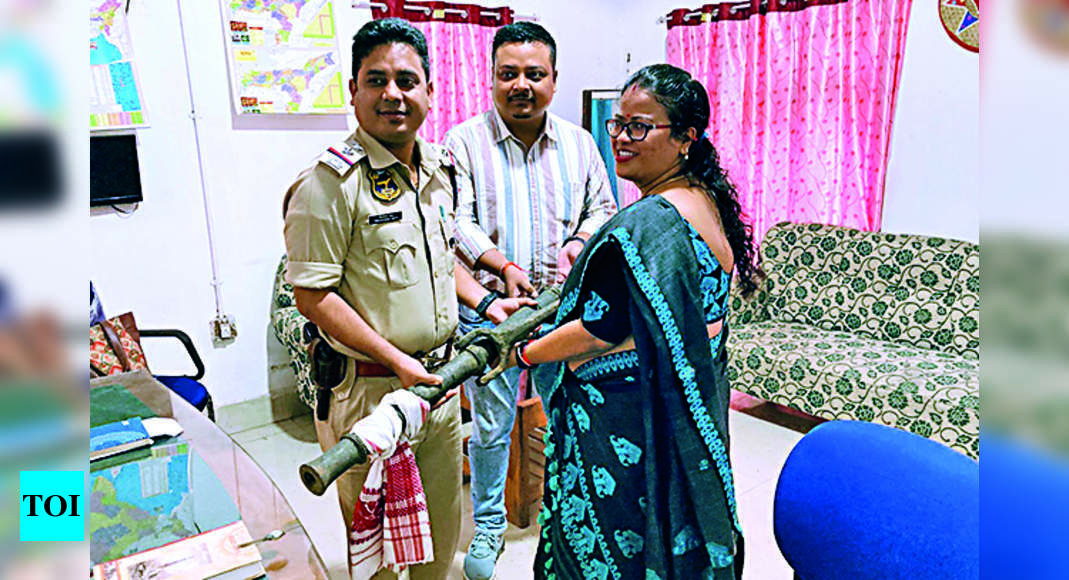 Guwahati: In a momentous discovery, a group of fishermen found the fourth handheld cannon of Ahom king Gadadhar Singha in a river near the hills in Jorhat district, close to the Nagaland border.
Conservation experts said the cannon retrieved from the river bed was manufactured in the late 17th century and bears similarities with three other handheld cannons of the mighty king, which have found a pride of place in the Assam state museum in Guwahati. The previous three weapons were brought to the state museum here from various parts of eastern Assam over the last 30 years. But the fourth one, which was found on October 7, has been made available for viewing in the Jorhat district museum from Monday.
“The fourth handheld cannon of the time of Gadadhar Singha was found in Telpung river in Gabharu pahar near the Tiru hills reserve forest. The prized weapon remained submerged in the sand of the river probably for centuries until the fishermen stumbled upon it and they passed the information to Mariani police station through the village headman,” Abantika Parashardistrict museum officer, said.
She said as per the years inscribed in the other three weapons of the lot, these were manufactured during 1604-06 Saka (1684-86 AD). The time of their manufacture coincides with the reign of Gadadhar, who ruled vast parts of Assam between 1681 and 1696 AD.
She said the recovery of the cannon near Naga hills is a testimony to the fact that it was used by the soldiers of Gadadhar. Gadadhar had a close connection with Naga hills and he had once become a fugitive hiding there to escape the wrath of Sulikphaa Lora Roja before he (Gadadhar) was crowned the king.
The Mariani revenue circle officer, after consultations with police, handed over the weapon to the museum authorities on realizing its antique value. Handheld cannons are known as gathiya hiloi in Assamese for the circular rings visible on the body. The cannon kept in the Jorhat museum is an inscribed cannon, which has inscriptions in old Assamese script. “Corrosion damaged some parts of the cannon due to long exposure to the water body, which also dries up during winter,” Parashar said. But interestingly, ‘Gadadhar’ and ‘Swar‘Are the two words still clearly visible on the cannon. The conservationists said ‘Swar’ is part of ‘Swargadeo’, which was used before the names of Ahom kings. The remaining alphabets may have been erased.