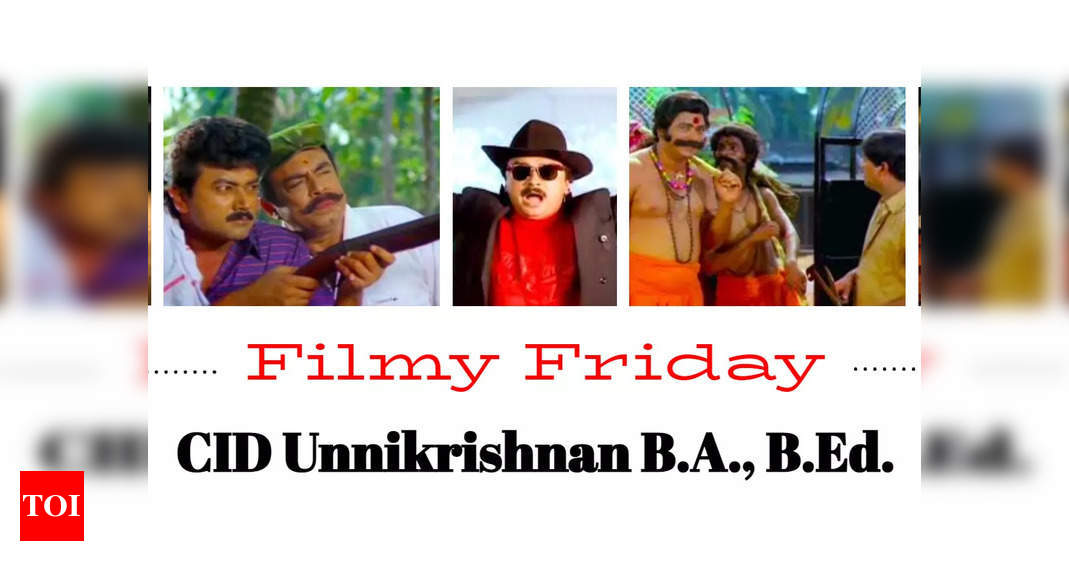 Friday evenings are all about having fun, and what’s more fun than watching a movie. ETimes presents – #FilmyFriday, in which we recommend our readers one Malayalam movie, every week. And this week we are recommending ‘CID Unnikrishnan BA, B.Ed.’ starring Jayaram.

The film opens with the visuals of Padmavathy’s (KPAC Lalitha) praying loud in a temple. Her prayer is so loud that daughter Uma (Gayathri) is embarrassed, and hints mother to tone it down. She is praying for her son Unnikrishnan (Jayaram), who is on his 51st interview. Dad Pappunni (Oduvil Unnikrishnan) too is praying for him. He doesn’t want his son to be a farmer like him. From Pappunni’s prayer, it is revealed that Unnikrishnan is holding BA BEd degrees. His dad’s only wish is to see him in a decent white-collar job. His parents have invested all their money in Unni’s education. Pappunni is even asked by his wife to do the
Shayana Pradakshinam (prostration).

Unnikrishnan is from a middle-class family and is in love with Dhamayanthi (Chippy), her dad’s friend’s daughter. By evening Unni returns home, he hasn’t got the job. And the next day, Unni comes across a newspaper ad posted for the job of a private detective, and he applies for the 52nd job, however, his only connection to the job is reading detective novels! Unnikrishnan’s parents decide to prep him for the job by assigning a trainer who could help him with it.

Finally the trainer, Rishikeshan Nair (Janardhanan) arrives. Nair has apparently trained plenty of police officers, soldiers, and private detectives. Nair arrives wearing a polo t-shirt and short trousers. From adopting Dronacharya’s method of finding the focus to training Unnikrishnan in handling a pistol, Nair has huge plans, however, fails himself in all, as he too has no connection with training. He was only a cook at the police training center.

Unnikrishnan finally gets the interview call. He manages to make quite an impression, by dressing in a red tee, black pants, paired with a black longline jacket, hat, and sunglasses. In order to get the job, Unnikrishnan has to acheieve the first task, which is knowing the whereabouts of Revathi (Rohini). Detective life isn’t as glamorous as it might seem! Unni is assisted by his friend Kunju (Indrans). The duo soon meets Oommen Koshy (Jagathy Sreekumar), who is assigned with the same task. Who will succeed in the task, and bag the job?

‘CID Unnikrishnan BA, B.Ed’ is a complete entertainer, packed with hilarious moments and the right amount of suspense.