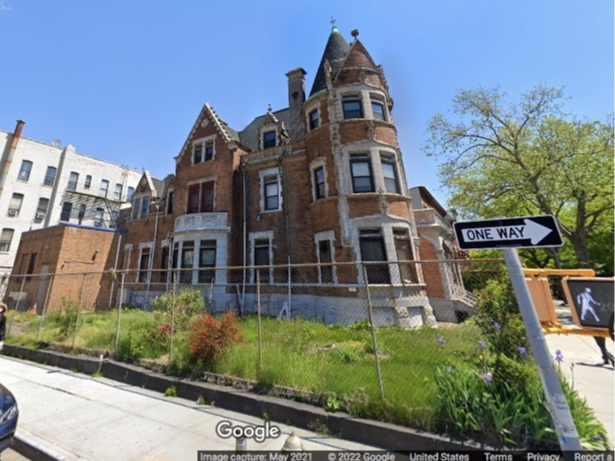 BED-STUY, BROOKLYN — A months-long effort to save a beloved mansion in Bed-Stuy is not over yet, despite its demolition plans inching toward a green light from the city, according to neighbors.

Residents fighting to save the 120-year-old mansion at 441 Willoughby Ave. — set to be replaced with condos — said this week they have started turning their sights toward saving as many parts of the cherished property as they can given that its tear down seems imminent.

Though demolition permits have not yet been approved for the property, developers Brooklyn 360 passed a pre-demolition inspection with the city on Thursday, a required step toward approval, officials said.

“As soon as a demo permit is granted there’s really nothing else you can do,” said Lauren Cawdrey, a local business owner and member of the Willoughby Nostrand Marcy Block Association. “My goal right now is to try to salvage.”

Salvaging the building was the main focus at a block association meeting dedicated to the 441 Willoughby Ave. property on Wednesday, just a day before developers checked the inspection box in their application.

Though unsure what its condition is, the group have commissioned architectural salvage experts to get in touch with developers about saving any original elements like copper roofs or blue stone they believe are inside.

Developers have seemed so far open to at least letting volunteers find new homes for another beloved part of the property: its gardens, Cawdrey said. Neighbors had feared ten-foot rose bushes, ferns and other landscaping would be torn up with the demolition.

The salvage plan is the latest step for the group, who first started a petition to get the building designated as a landmark at the end of last year when they first learned Brooklyn 360 were working on closing a deal to become the new owners, according to the petition and BK Reader.

Nearly 1,200 neighbors have signed a petition as of this week.

The Willoughby Avenue mansion, known as The Jacob Dangler house., was completed in 1902 and was still owned as of Friday by masonic organization Oriental Grand Chapter of the Eastern Star, who have used it largely as an event space over the decades.

“Weddings, parties, baby showers, block association meetings — basically anyone who lives in the community has been there for some kind of event,” Cawdrey said. “It’s been a big pillar of the community.”

The original plan to get the building designated as a landmark is still in the works, though neighbors worry it will stall until after demolition gets the green light, Cawdrey said.

The Landmarks Preservation Commission Patch told this week it is reviewing a request from the advocates.

“LPC received a request to evaluate 441 Willoughby Street as a potential landmark and found that it may merit consideration, but this does not mean it will be recommended or formally considered for designation at this time,” a spokesperson said.

Should the demolition go through, the next step for neighbors would be monitoring the construction process. Cawdrey said neighbors fear that, given the size of the property, a high-rise could be in the works.

So far, Brooklyn 360 has started clearing out debris and has not revealed exact design plans for the new building, according to reports.

“We want to see what the plans are,” Cawdrey said. “I just wanted [developers] to know we’re watching — We’re going to be a part of this.”