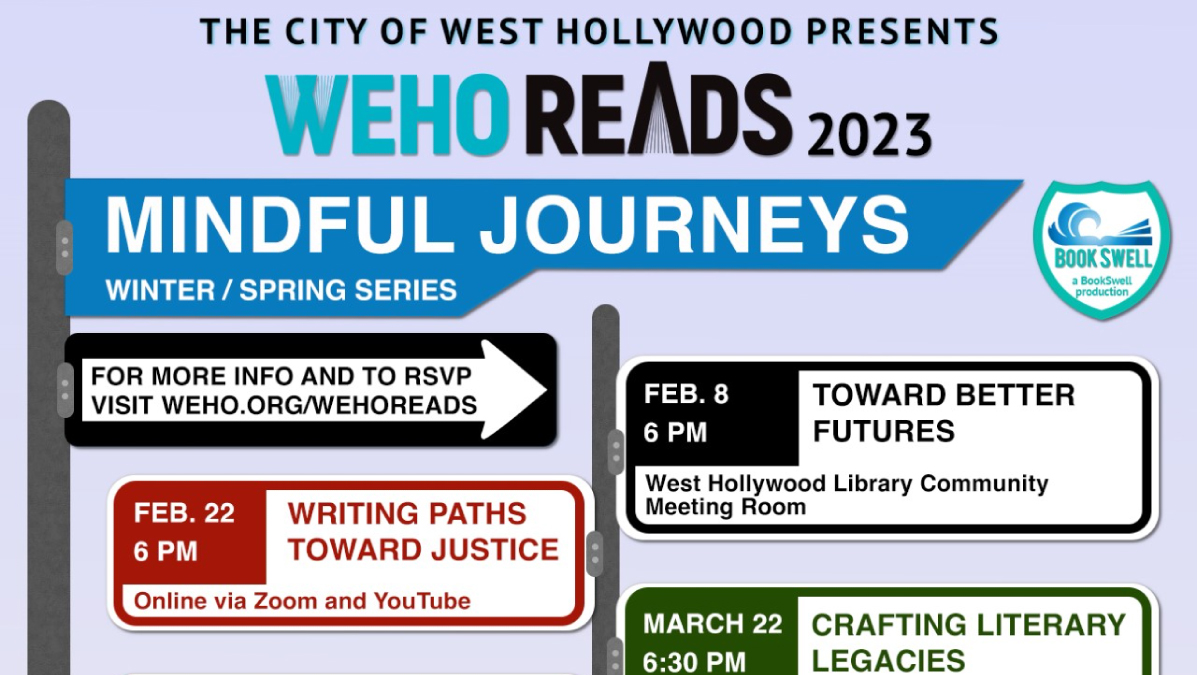 WEST HOLLYWOOD, January 23, 2023 – The City of West Hollywood is launching its 2023 WeHo Reads literary series with a reception, readings, and the launch of a new photographic exhibition. Community members are invited to celebrate art, literature, poets, and authors.

At 6 pm, there will be a reception for an exhibition of photographs from a contest that was held around the theme of the 2022 WeHo Reads series about creating joy in times of sorrow. The contest was held in the fall of 2022 and was juried by writers/photographers Lynell George and Marisela Norte. Photographers featured in this exhibition include: Natalia Affonso, Nadia Alamah, Rick Castro, Arpan Basu Chowdhury (who had the first-place winning submission), Gabriella Maria dos Santos Silva, Victoria Goring, Haro Istamboulian, Louis Jacinto, Alessia Piscopo, Mateo Salas , and Don Tinling.

RSVPs are required to attend this event at www.weho.org/wehoreads.

This year’s theme for WeHo Reads is Mindful Journeysand the events will feature writers who are seeking to navigate joy in the midst of sorrow and craft mindful journeys toward better futures, whether through fiction, creative nonfiction, or poetry.

WeHo Reads is presented by the City of West Hollywood’s Arts Division and produced by BookSwell, LLC. Additional support for WeHo Reads is provided by UCLA Extension Writers’ Program and Poets & Writers as well as media partnerships with Bookshop.org, Book Soup, and Los Angeles Review of Books.

This discussion will explore what can we learn about human nature from imagining the paths taken by criminals and outcasts. Walter Mosley is one of America’s most celebrated writers with over 50 published books. His recently published novel, Every Man a Kingis the second installation in his Joe “King” Oliver series. Stephen Cha is the author of Your house will paywinner of the Los Angeles Times Book Prize and the California Book Award, and the Juniper Song crime trilogy. Kelly Garrett is an Anthony, Agatha, and Lefty award-winning author whose most recent suspense novel, Like a Sisteris about the death of a disgraced reality TV star. Joe Ide is the author of the award-winning IQ series, including the most recent installation, Smoke. Jordan Harper has been a music journalist, film critic, and TV writer. His most recent novel, Everybody Knows, is a crime thriller about a publicist who works for the corrupt and depraved elite in Southern California. This online event will take place on the City of West Hollywood’s WeHo Arts YouTube Channel at www.youtube.com/wehoarts. Members of the public can RSVP and be sent a direct link to view the event by visiting the WeHo Reads webpage on the City’s website at www.weho.org/wehoreads.

All events are free to attend. For additional information about these events and to RSVP, visit www.weho.org/wehoreads.

BookSwell, a literary events and media company dedicated to lifting up writers from historically excluded communities, is producing the WeHo Reads 2023 season. BookSwell was founded in 2017 by Cody Sisco.