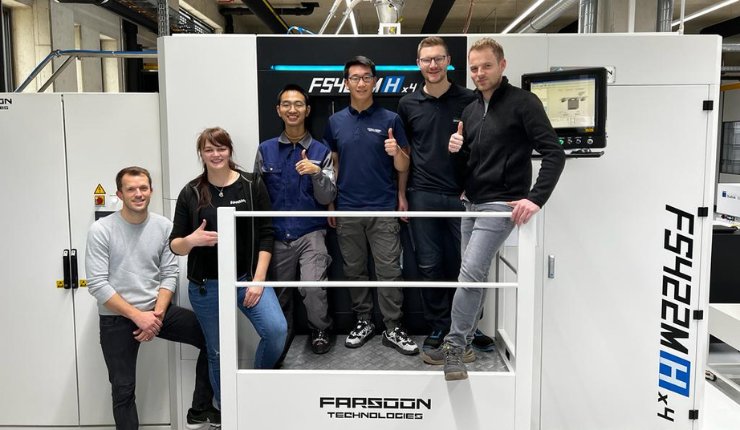 Farsoon Technologies has announced that after ‘deep evaluation and benchmarking’, toolcraft AG ordered a new laser powder bed fusion (LPBF) system from the company a number of months ago, for the additive manufacturing of metal parts.

The installation of the FS422M-4 system was confirmed in a press release distributed on January 17.

“I am positively impressed on the speed and professionalism of the Farsoon team installing the laser powder bed fusion system in our facilities in toolcraft,” said Mr. Christoph Hauck, Chief Technology Officer and Sales of toolcraft AG. “The Farsoon FS422M-4 system has passed the factory acceptance test at the first trial, and we have started production of high-quality aluminum parts for sale to our customers already.”

The FS422M-4 operates with four laser/scanning systems for high quality parts in serial production, with a build cylinder size of 425 x 425 x 550 mm3.

Farsoon also announced that it has entered into a joint development agreement with toolcraft, for optimizing hardware and software of the FS422M-4 system, and quality assurance of metal parts production.

According to Farsoon, the collaboration will see the companies join forces with ‘complimentary competences’, on laser melting system hardware, auxiliary equipment, processing parameters, optimization of productivity and reduction of production costs per part.

“Toolcraft has put Farsoon under high pressure for demanding requirements on quality of aluminum parts at the lowest production costs. toolcraft today confirmed Farsoon achieving these requirements, which is highly satisfying for me,” said Dr. Dirk Simon, Managing Director of Farsoon Europe GmbH. “The status achieved is very encouraging for us to collaborate with toolcraft in a developmental partnership to further optimize the system for the production of better metal parts at lower production costs.”

At TCT Asia in November 2022, Farsoon announced the development of Quad-laser Flight Technology on the HT1001P 3D printing system.

Want to discuss? Join the conversation on the TCT Additive Manufacturing Network.

Get your FREE print subscription to TCT Magazine.

Exhibit at the UK’s definitive and most influential 3D printing and additive manufacturing event, TCT 3Sixty.