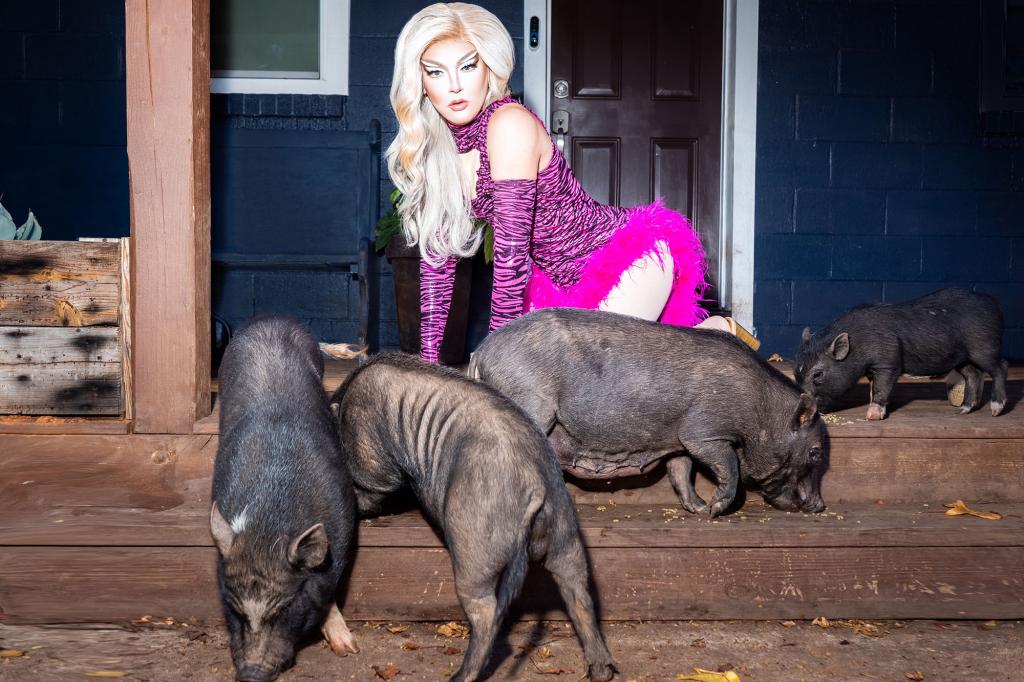 This songful diva wants the spotlight — but their 11 filthy roommates are the real attention hogs.

Farmer-turned-drag queen Brandon Hilton is as happy as a pig in mud, sharing their home and bed with a litter of oinking pigs that they consider their kids.

“Currently I live with 11 pigs in my house, in various rooms, destroying various things, but I love them dearly and make sure they are the happiest hams in town,” Hilton, 30, from South Carolina, told NeedToKnow.online.

“They do sleep with me,” added Hilton, who dons a platinum blonde wig, glitzy bodysuits and six-inch stilettos when doubling as ultra saucy recording artist Onya Mann. They’re also a fashion designer for the House of Mann brand, which has been featured in Vogue, Harper’s Bazaar and Paper Magazine. “Sometimes we have had as many as seven [pigs] in our bed at once,” they continued.

A lifelong lover of animals, Hilton spontaneously purchased his first piglet, a male named Pig Pig, at a flea market several years ago.

“I didn’t know anything about pigs or what I was getting myself into at all, I just jumped in as I do,” they joked.

“When Pig Pig met Princess, it was love at first sight but apparently they were doing more than cuddling at night,” said Hilton. “Since then I have had 21 pigs come through these doors.”

Hilton gladly shells out a whopping $100 a week on nearly 50 pounds of food, including fresh fruits and vegetables, for their brood of live-in livestock.

“I consider them my children,” said Hilton.

“I hand-birth every single one and give them kisses from the day they’re born to the day they find their forever homes.”

Their love for the flock aside, Hilton admits that living in a house of hogs isn’t always a dream — especially as a glam goddess.

“Wrangling pigs in six-inch heels is a big challenge,” they said. “When I’m fully dressed up and ready to go, I have to get them back inside so I can get to the gig.”

Even the most senior swine has driven Hilton to the edge of sanity.

“Pig Pig once broke into my drag room where I keep all my nice costumes and wigs,” they groaned.

“He somehow pushed the door closed with his nose and then it was just him and all my nice things,” said the voluptuary. “Let’s just say it really tested my love for that butter ball.”

The mischievousness notwithstanding, Hilton confessedly enjoys learning the intricacies of each little piggy’s unique psyche.

“Each pig has their own personality,” they said.

“Some are more affectionate than others, some will only sleep in certain places or eat certain foods,” Hilton noted, adding that Runt Runt prefers to be served his own portion of food rather than to share with his siblings. “Some are more vocal than others, and some don’t talk at all.”

But when it comes to their preferred sleeping accommodations, the pigheaded gang isn’t shy about voicing their specific needs.

“One day they snuck up the stairs and into our bed and then one by one, litter by litter they have added themselves to our bed,” said Hilton. “And now, even the mom, Princess, demands to be let into the bedroom to cuddle.”

And although Hilton’s little hams take up as much mattress space as they’d like, the musically inclined queen doesn’t let the collection take up their entire life.

“I began in bars lip-syncing to other people’s songs but then I started recording my own music in 2010 to 2013 and performing my own songs,” said Hilton.

“I’ve always been a performer, from a very early age I was put into church and school plays,” they continued. “As I got older, I began performing for my sister and grandmother in our basement to Cher, wearing Halloween costumes and wigs my grandma would buy me.”

Hilton stylishly incorporates the farm in their pursuit of fame.