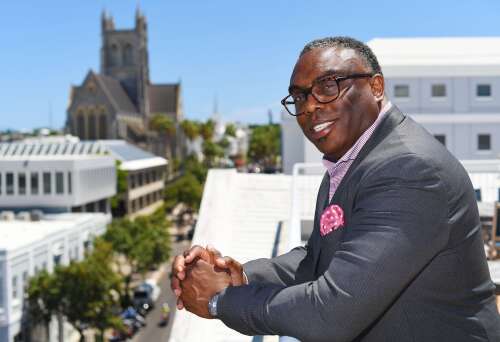 The reopening of the island’s biggest resort is “critical” to the recovery of the visitor industry, the chief executive of the Bermuda Tourism Authority said today.

Charles Jeffers II highlighted that the number of hotel beds in Bermuda had plummeted to below 2,000 for the first time in “recent tourism history” and that the 1,800 available rooms was just 43 per cent of the 1990 figure.

Mr Jeffers said: “Though the island’s inventory of holiday rentals has increased over the past few decades, the volume has not made up for the loss in available hotel rooms and those visitors tend to skew towards leisure and not group travel.

“This hinders our ability to build demand for group and leisure business. It limits vital on-island spending, which would contribute to the revenues of our taxis, vehicle rental companies, tour operators, entertainers, restaurants, and other businesses directly or indirectly connected to tourism in Bermuda.”

“Moreover, without a timeline on the Fairmont’s reopening, we are challenged to plan for group business sales and increased airlift, which underpins so many elements of our tourism growth strategy.”

Mr Jeffers said the BTA had engaged in training and development schemes to prepare Bermudians for an expected rise in visitor arrivals over the next few years in collaboration with the private sector.

He added: “We encourage anyone looking to be a part of what promises to be a dynamic tourism future to register with the Department of Workforce Development for jobs and opportunities in the industry.”

Wayne Caines, the BTA chairman, claimed the island was on track for a “a tourism renaissance” with the reopening of the hotel.

He added that conversations between the Government and hotel investors were a “crucial component” of increasing tourism.

He said: “The reopening of the Fairmont Southampton will be a major boon to the sector delivering a multitude of benefits to Bermuda’s economy.

“In the first instance, the planned redevelopment phase will create job opportunities in construction and infuse cash spending into businesses beyond those categorized as traditional hospitality.

“Finalizing a timeline to reopen Bermuda’s marquee resort, the Fairmont Southampton, is a crucial next step to achieve that aim.”

The two were speaking after it was suggested a key element of a bust-up between the Premier Curtis Dickinson, the former finance minister, was a Government sweetener for the $376 million revamp of the Fairmont Southampton.

A major source of tension between David Burt and Curtis Dickinson, who quit the finance job days before last week’s budget was unveiled, is believed to have centered around a “statement of financial position” – a balance sheet for a business project – for the Fairmont southampton

An SFP lists the assets, liabilities, and equity of an organization and provides a financial snapshot.

The statement was among several flashpoints which triggered Mr Dickinson’s exit from the cabinet.

Mr Burt said last week that Mr Dickinson had agreed a $50 million guarantee to owners Gencom for the Fairmont Southampton in 2019.

Mr Burt wrongly added he had said that in recent Budget statement.

He did make a reference to a 2019 deal, but did not give a figure for the guarantee.

But the Government said in March last year that it had not committed to provide “any form of financial guarantee” for the Fairmont Southampton redevelopment.