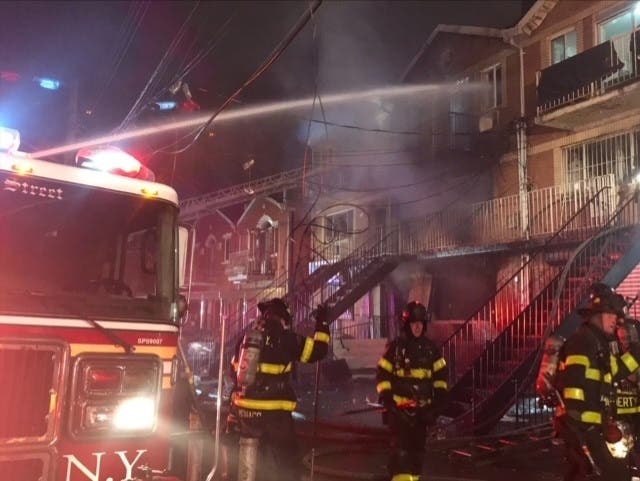 BROOKLYN, NY – After an explosion in a Brooklyn row house early Wednesday morning, firefighters battled a fire that the fire department said spread to several buildings on the block.

The fire broke out just after midnight in the basement, first and second floors of a house on Vermont Street in Cypress Hills, where there was an explosion in the front of the house, according to FDNY.

The flames collapsed the first floor in the basement as the fire spread to adjacent buildings and drove families into the streets, according to FDNY and State Senator Julia Salazar, who lives on the block.

The fire quickly escalated into a three-alarm fire.

“We had to do searches, evacuate those buildings, and put out the big fire,” said Sheridan. “… The first floor collapsed into the basement so we couldn’t search that area. The units on site did a great job.”

The fire left six people with non-life threatening injuries, Sheridan said. Two people were taken to the hospital and the other four refused to receive medical treatment.

When the fire was put out, the flames affected four other homes on Vermont Street and one on nearby Jamaica Avenue, according to the Red Cross.

Nearly 20 families, 51 residents, have been evicted from these buildings and have received help from the organization, a spokesman said.

“Over the next few days, Red Cross clerks will be working with these families to connect them with government agencies and other nonprofit organizations that can help with longer-term recreational needs,” the spokesman told Patch.

It wasn’t immediately clear what caused the explosion, but a neighbor did tell 1010 PROFITS They smelled gas and called a landlord to take care of it.

This is breaking news. Refresh the page for updates.