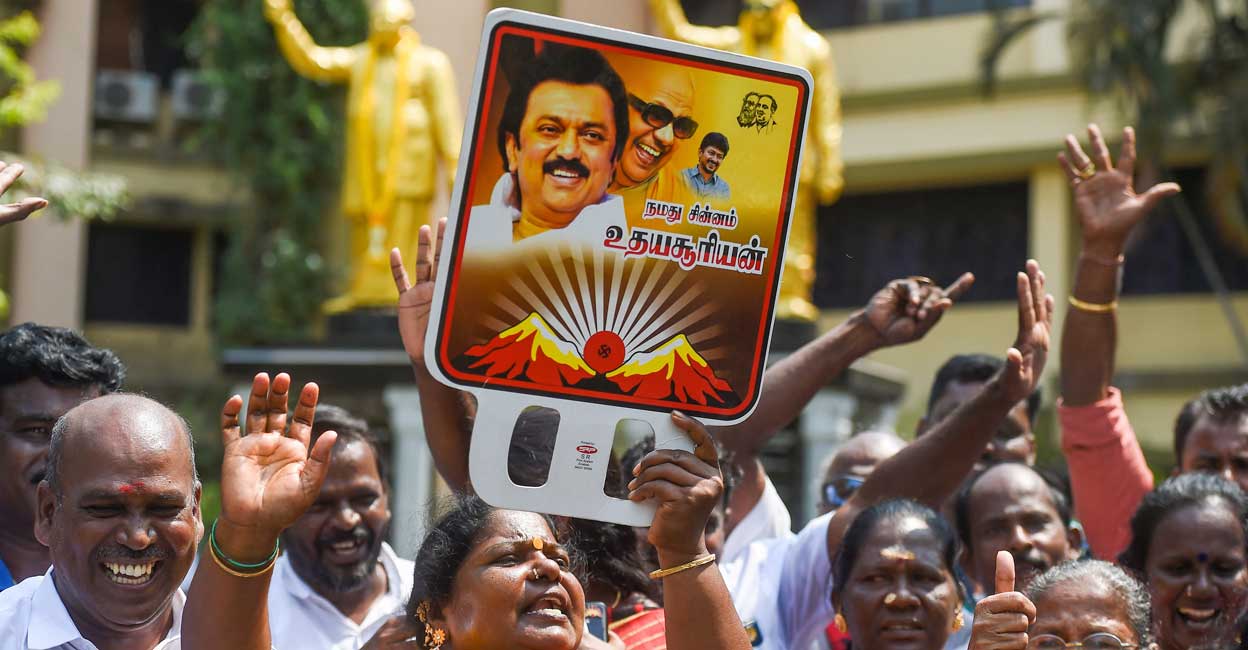 Chennai: The past few days saw an action replay from Tamil Nadu political parties against Union Home Minister Amit Shah’s recent comments on having Hindi as the alternative to English.

Political parties such as the ruling DMK, opposition AIADMK, PMK, MDMK and others came out against Shah’s statement.

The DMK’s daily, ‘Murasoli’, on its part, came out with an article against Shah’s views.

According to DMK MP Kanimozhi, the imposing link language will not unite the country, but instead break it.

She said the Union government and its ministers should know the history of the anti-Hindi agitation and the sacrifice of several lives.


The state BJP leaders themselves had said the party did not accept imposing Hindi on the people of Tamil Nadu.

Couple of years ago, Shah had said “it is very essential that the entire country has one language which becomes its identity in the world” and that only Hindi could be such a uniting force.

Political parties in states like Tamil Nadu and Karnataka saw it as an attempt to impose Hindi on them and declared their intent to launch an agitation against it.

The DMK and PMK said ‘One nation, One Language’ would prove disastrous for the country.


As more and more leaders spoke out against his remarks, Shah clarified that he never sought imposition of Hindi on other regional languages ​​and had “only requested” that Hindi should be learned as a second language along with one’s mother tongue.

In a clear bid to pacify the regional parties, Shah said he himself comes from Gujarat, a non-Hindi state.

Earlier, a proposal in the draft New Education Policy (NEP) of the Central government for compulsory teaching of Hindi in schools under the three-language formula had also triggered a row.

It was modified after states like Tamil Nadu, Karnataka and West Bengal expressed opposition.

There was also a decision of the Railway Ministry to hold recruitment exams only in Hindi and English, but it was too withdrawn after protests.

Similarly, the Southern Railway had issued instructions to the divisional control office and station masters to speak in Hindi or in English and avoid regional language to prevent misunderstanding. This too was withdrawn after protests.


Taking a dig at Shah on the Hindi language issue, Tamil actor-politician Kamal Haasan had said “no Shah, Sultan or Saamraat” should renege on the promise of unity in diversity that was made when India became a Republic.

On the other hand, BJP leaders like H. Raja term DMK’s anti-Hindi stance as false since the schools run by the party functionaries or their relatives are under the Central Board of Secondary Education (CBSE) where Hindi is taught. Let them change their schools to the state board stream, they say.

According to DMK spokesperson and MP, TK S. Elangovan, among the Indian languages, Tamil has the qualification to be the language for global identity as it is the official language in Sri Lanka, Singapore and India.

Incidentally, to answer the issue of the large number of Hindi speakers, DMK founder CN Annadurai had said if that was the case, then crow should have been the national language and not the peacock.

Be that as it may, the anti-Hindi agitation had its roots in Tamil Nadu way back in 1930s – even before India’s independence in 1947.

The first while Madras Presidency had witnessed agitations when Hindi was sought to be introduced as a subject in schools when late C Rajagopalachari was the Chief Minister of the Indian National Congress government.

The move was opposed by EV Ramasamy and the Justice Party and the agitation went on for three years. Two protesters lost their lives and over 1,000 people were arrested.

Within the government there were two views — one in support of teaching Hindi and the other making the subject optional.

However, in 1939, the Congress government resigned, protesting against Britain’s decision to make India a party to the war against Germany. The next year, the British government withdrew the Hindi teaching order.

The second phase of the anti-Hindi agitation, again led by Ramasamy and DK, was during 1946-1950 whenever the government tried to bring back Hindi in schools. In a compromise, the government decided to make Hindi an optional subject and the protesters stopped.

Later in 1953, the DMK protested the renaming of the Kallukudi town into Dalmiapuram (after industrialist Ramkrishna Dalmia) on the grounds that it signed the exploitation of South by the North.

In 1963, protesting against the passage of the Official Languages ​​Act, the DMK led by Annadurai launched a protest. A DMK member, Chinnasamy, immolated himself in Trichy district.

People were apprehensive about knowledge of Hindi being the major criteria for Central government jobs mobilizing students in large numbers against Hindi.

Annadurai said January 26, 1965 would be observed as the ‘mourning day’ and later advanced it to January 25.

In Madurai, a clash erupted between protesting students and Congress cadres, resulting in riot and arson spreading throughout the state.

Railway compartments, Hindi boards were burnt and there was looting of public property. The Congress government treated the protest as a law and order problem and tried to quell it by police force, which in turn fueled the protests.

As per the state government figures, about 70 persons were killed during the protests.


The agitation had its effects on the Central government headed by Prime Minister Lal Bahadur Shastri, as two Ministers – C Subramaniam and OV Alagesan – resigned from their posts.

While Shastri accepted the resignations and forwarded them to President S. Radhakrishnan, the latter refused to accept them. Radhakrishnan also advised Shastri not to precipitate the issue further.

The agitation, spearheaded by the DMK and the students, was one of the major reasons for the Dravidian party coming to power in the state in 1967, displacing the Congress.

That election ended Congress rule in Tamil Nadu, till date.