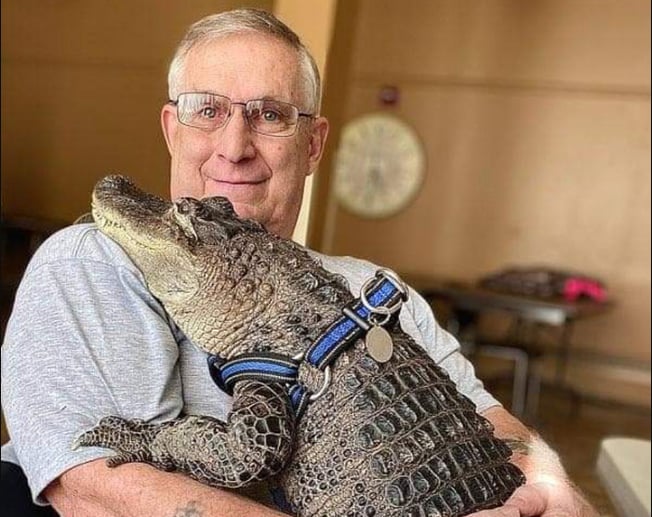 Joseph Henney’s emotional support animal WallyGator goes with him almost everywhere, from the grocery store to walks in the park. They hug each other and sleep in the same bed. WallyGator is an alligator.

“When he turns his nose toward you, that means he expects a kiss,” said Henney, 69, who goes by Joie (pronounced “Joe”) and lives in Jonestown, Pa., about two hours from Philadelphia. “He’s super sweet-natured.”

The two watch television together on the couch, and when Henney takes him to the farmers market, WallyGator gives hugs to shoppers — as long as they are okay with being that close to a 70-pound reptile with a mouth full of razor-sharp teeth .

“Wally is definitely not your average crocodilian,” said Henney, explaining that most people in his community are familiar with his 7-year-old, 5½-foot emotionally support alligator.

WallyGator has a following on TikTok and Instagram, and he made headlines Friday after Henney took him to Love Park in Philadelphia.

“He’s a very special gator, but I wouldn’t recommend that anyone get one,” he said. “If you don’t know what you’re doing, you will get bit.”

Henney’s unusual relationship with WallyGator started in 2015, he said, when a friend called from Florida and asked if he could take in a few gators that had been found in a pond in Orlando.

Henney makes a living in woodcrafting, but he has always enjoyed caring for reptiles as a pastime, he said.

Alligators are legal to own in Pennsylvania, and Henney has helped relocate unwanted alligators, snakes and iguanas to wildlife sanctuaries as a hobby for about 30 years. He keeps his rescue reptiles in his home in separate indoor enclosures that he purchased for this purpose. He then finds sanctuaries or zoos that will take them, he said.

He is usually called to rescue alligators when people take in cute baby gators as pets but they inevitably turn into large animals that can be difficult to handle, he said. They are, after all, an animal that has not changed since the time of the dinosaurs.

Henney told his Florida friend that he could take in three juvenile alligators. After a while, he sent two of the gators to reptile refuges in New York and New Jersey, he said.

But he decided to keep WallyGator, who was 14 months at the time.

“I bonded with him and was committed to caring for him,” Henney said.

“One of the problems when someone gets an alligator for a pet is they don’t realize they’re in for a long haul,” he said, noting that the reptiles can live 80 years or longer in captivity.

They breathe air and generally live in freshwater, but their skin does not need to stay wet for survival. It isn’t common for people to want alligators as pets, though it does happen more than most people realize, he said.

“When they get to three feet, nobody wants them,” Henney said. “They can bite and they’re extremely hard to handle.”

Wildlife experts agree: Alligators generally don’t make good pets, and they’re illegal to own in many states. The animals can also be deadly. Last month, an 80-year-old Florida woman was killed when she fell into a golf course pond and was attacked by two alligators.

“The jaw pressure from an alligator’s bite force is incredibly strong, and their powerful tails can whip you,” said Raul Diaz, a herpetologist and evolutionary development biologist who teaches at California State University at Los Angeles.

They are also predators who are hardwired to believe that other creatures want to eat them, so they are defensive early on, he said.

“I definitely assume that [Henney] is an exception when it comes to caring for an alligator — he’s done a good job,” Diaz said. “But most people don’t have that kind of time to devote to a pet alligator’s care.”

The large reptiles require a special diet and enrichment such as logs or live plants to hide under and running or spraying water to thrive under human care. They should never be handled by people who aren’t trained, said Matt Evans, assistant curator of herpetology at the Smithsonian’s National Zoo and Conservation Biology Institute in DC

“If you are interested in working with alligators, volunteer at your local zoo or nature center or get involved with citizen science,” Evans said.

Henney has cautiously handled alligators for years, and he said he noticed from the first day that WallyGator was different.

He said he was surprised when WallyGator, then 20 inches long, didn’t try to bite him when he held him or fed him chicken legs and dead rats.

“He wouldn’t eat live rats, and he really showed a love for cheesy popcorn,” Henney said. “I thought it was different, but I was still very cautious around him.”

He felt comfortable enough around WallyGator, though not to keep him in an enclosure, he said.

“I’ve been handling gators for years, and I’ve learned to read them,” he said. “An alligator isn’t going to attack you for no reason. I’m always careful, but I felt it was fine to let [WallyGator] roam free in the house.”

It didn’t take long, he said, before WallyGator began to follow him around the house like a curious pup. He said his leathery roomie showed affection by staying close to him and being docile.

“He enjoyed being held, and I thought, ‘Wow, this is a super nice, friendly alligator,'” Henney said.

Then, in 2017, several members of Henney’s family died, leaving him sad and grieving. That was when he and his unusual pet really bonded.

“I was depressed and WallyGator started to do silly things to cheer me up,” Henney said. “When I was on the couch, he’d pull my blanket to the floor.”

Soon, WallyGator was up on the couch with him.

Stealing the covers became a favorite pastime, along with curling up together and watching “Gator Boys” on TV. WallyGator also enjoys relaxing in his 300-gallon portable pond in the living room, Henney said, and the two will often take a dip together in a friend’s swimming pool.

Henney said WallyGator also helped him emotionally as he endured a recent diagnosis of prostate cancer and weeks of radiation treatments. He, of course, took his cold-blooded friend with him.

It was several years ago, he said, when he told his doctor how much WallyGator’s antics had greatly helped reduce his depression. He was shocked when one day the physician offered up an idea:

What if he were to register WallyGator as an emotional support animal?

“I said, ‘Are you off your rocker? An alligator is the most feared animal in the world,’” Henney recalled.

But he went home that day with a letter from the doctor, stating that WallyGator qualified as an emotional support animal.

People were surprised when they learned that Henney’s alligator had joined the ranks of the emotional support peacock and donkey, he said. He has been known to dress him in a tuxedo and sunglasses, and sometimes even a hat.

Henney is going for yet another distinction for WallyGator: America’s Favorite Pet — an annual contest traditionally for dogs and cats. This year, the competition was opened to include animals of all kinds. The winner receives $10,000, and the final round of voting will end Oct. 27

Henney now takes his gator to swim parties, football games, and to schools and summer camps for educational presentations about reptiles. WallyGator does not have a harness around his mouth, but he has never asked anyone, Henney said.

He said he would never want to take WallyGator on a flight.

“Some people are scared of alligators,” he added. “I wouldn’t want to start anyone.”

That wasn’t a problem with Michael Helfrich, the mayor of York, Pa. WallyGator met him at City Hall earlier this year.

And seniors who live at SpiriTrust Lutheran — The Village at Sprenkle Drive, a retirement community in York, are delighted when they see the gator walking down the hall in his bright red animal-support vest.

WallyGator has visited several times, and most of the residents are eager to pet him and ask questions, Henney said. A brave few will request to hold the reptile.

“WallyGator is cool to the touch, but has the most relaxed personality I’ve ever seen,” said Hannah Tedesco, a life-enrichment leader at the center.

She invited Henney and his alligator to return to the retirement home on Nov. 15 for Steve Irwin Day.

“The first time I saw WallyGator, I stopped in my tracks,” Tedesco said. “It’s not every day that you see an alligator on a leash.”

WallyGator continues to grow and pack on hundreds of pounds. Henney said he eats a couple of chicken legs and rats every three days, along with a bag of cheesy popcorn.

Henney said it’s a safe bet that his pet gator will outlive him, so he has an arrangement with a friend to ensure that WallyGator will spend the rest of his days in reptilian comfort.

He hopes that WallyGator won’t have to move soon.

“During a hot summer, he’s nice and cool to sleep with,” he said.

Have a story for Inspired Life? Here’s how to submit.