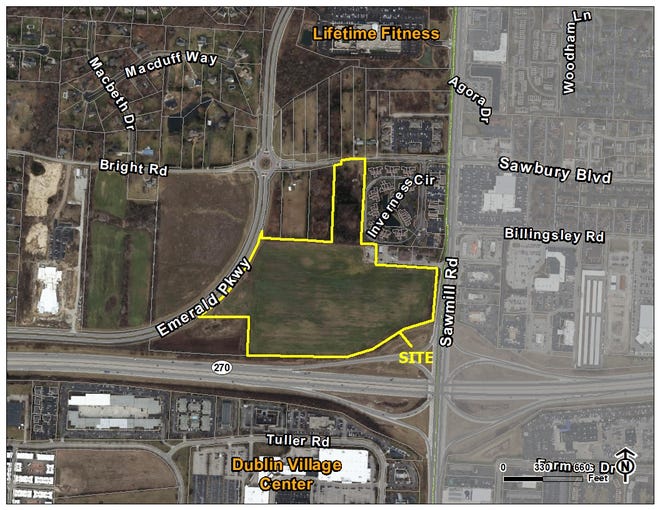 A plan for a 30-bed in-patient hospital by Mount Carmel Health System near Emerald Parkway and Interstate 270 in Dublin has advanced to the next stage of approvals.

The Dublin Planning and Zoning Commission on March 3 unanimously approved a recommendation for the rezoning of 35 acres from a restricted suburban residential district to a planned-unit development. The commission also approved a preliminary development plan for the project.

The next step is for Dublin City Council to consider the commission’s recommendation to approve the rezoning, after which Mount Carmel would submit a final development plan to the commission, said Andrew Kohn, a public affairs officer for Dublin.

There is no minimum requirement for City Council to consider the commission’s rezoning recommendation, and Mount Carmel would submit the final development plan at its own discretion, he said.

“We made this a better project together,” said Rebecca Call, chair of the planning and zoning commission.

She was referring to the work of city staff members, the applicant and members of the East Dublin Civic Association since the project was submitted as a concept plan Nov 4.

“We look forward to the next step when we get down to the Lego blocks,” said Call, noting the landscape, architectural and building-material details included in a final development plan.

Jason Koma, regional director of government affairs and development for Mount Carmel, said March 4 that the final development plan would reflect the “refinements” that commission members voiced while considering the rezoning and preliminary development plan.

“We want to move as quickly as possible and hope to present the final development plan by early summer,” Koma said.

The hospital, which would front Bright and Sawmill roads, Emerald Parkway and Interstate 270, would be built in two phases, said Nichole Martin, a senior planner for Dublin.

A second phase calls for the construction of an 84,520-square-foot detached medical office building, as well as completion of the hospital’s fourth floor that would be built but not occupied in the first phase, Martin said.

The project calls for 6.9 acres of open space that Martin called “substantial,” as well as 780 parking spaces in the first phase.

Although commission members approved the preliminary development plan, some expressed concerns about traffic congestion, including construction equipment during its building and after its completion, and asked for considerations to be included in the final development plan.

The primary access to the hospital would be from Emerald Parkway, but it would have limited access from Bright and Sawmill roads at full buildout, Martin said.

“I think it is an amazing project and am looking forward to it,” commission member Leo Grimes said.

The proposed facility would create more than 350 health-care jobs and provide a full range of health services to the community, Weisenauer said.

Some of the employees will be students at Dublin City Schools buildings, Koma said.

The hospital will participate in a school district job fair April 12, Koma said.

The community has one other large hospital: OhioHealth Dublin Methodist Hospital at 7500 Hospital Drive, just off US Route 33 in northwest Dublin.