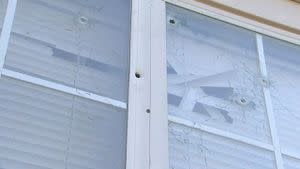 More than three dozen rounds were shot into a Grier Heights home early Monday and the owner is worried because the shooter has not been caught.

The gunfire narrowly missed a 75-year-old man sleeping in his bed at the home on Marney Avenue in the southeast Charlotte area.

Billy Burbank works nearby and was at the home when police investigated the crime scene Monday.

One round went through a window, into a room, through the kitchen and into the bedroom, hitting the headboard above the man sleeping.

“I just feel so sorry for all of the people that live here,” Burbank said.

Most of the shots were concentrated in one area and shell casings fell in one spot, which could mean the shooter fired while standing in the street.

Brandon Brown is an advocate with United Neighborhoods of Charlotte, a group working to stop violent crimes.

Brown said over the phone that there have been 10 shootings in the Grier Heights community in recent months. Four have been fatal.

>>Watch Channel 9’s LIVE STREAM wherever you are, at this link

He said the problem is that people are afraid to talk to the police, which must change.

“Fear is fake evidence appearing real,” Brown said. “You have to speak up in order to protect your family.”

The police are looking at video cameras from nearby homes to identify the shooter.