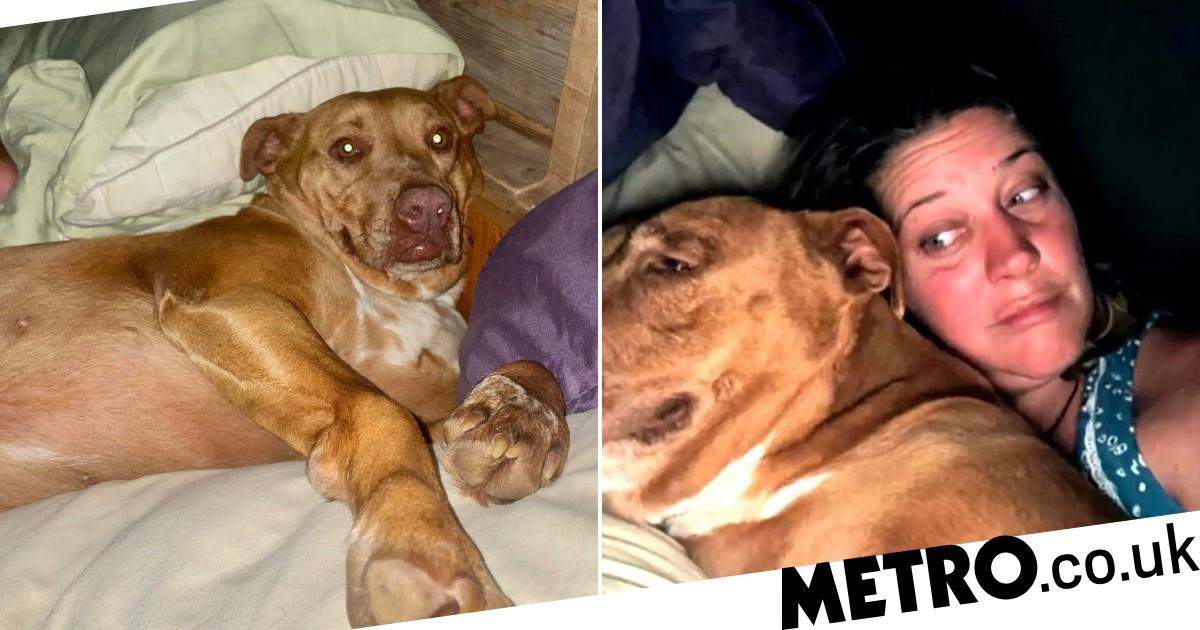 A Tennessee dog with a penchant for ‘ignoring personal space’ walked two miles before settling down for a nap in a random home.

Jimmy and Julie Johnson had accidentally left a back door open at their home in Polk County on May 1.

Unbeknownst to them, two miles away, Nala the dog had slipped her collar and embarked on a night-time adventure.

She sneaked her way into Jimmy and Julie’s home, and padded past their dogs, before jumping into bed with the couple.

Facebook was then used to reunite the pup with her real owner.

Julie posted: ‘It is absolutely normal to wake up in our house with one of our dogs in the bed with us. One small problem, THIS IS NOT OUR DOG, nor do we know how she got in our house.

‘At first, we thought it was one of ours, but they rarely lay on the pillows! In pitch darkness, I just assumed it was. Wouldn’t we all?

‘As daylight began to creep in through our curtains we realized we were snuggling with someone else’s dog. This is the weirdest post I have ever had to make.’

The post spread through the town and eventually reached Nala’s true owner—Cris Hawkins.

Julie requested ‘all sorts of photos’ of Nala to ensure she had found the right person.

Cris quickly responded with Christmas pictures and other proof of ownership, before leaving to pick up the naughty Nala.

Both parties involved found the situation amusing rather than alarming, and have even organized ‘puppy playdates’ so their pets can get to know each other.

Chris posted on Facebook: ‘Our overly friendly pup, Nala, has hit an all time record for ignoring personal space and added yet another trick to her long list of Houdini acts.

‘She slipped her collar yesterday while being walked, ran down the street to a neighbors house, somehow managed to get into their house, and climbed into bed with them in the middle of the night.

‘The woman and her husband have three dogs of their own that all sleep in bed with them.

‘None of their dogs reacted to a random dog climbing into bed with them and the couple didn’t even realize that it wasn’t their dog in bed with them, until the sun started to come up.’

Cris later clarified he had used the term neighbor ‘loosely’ and the house was two miles away.