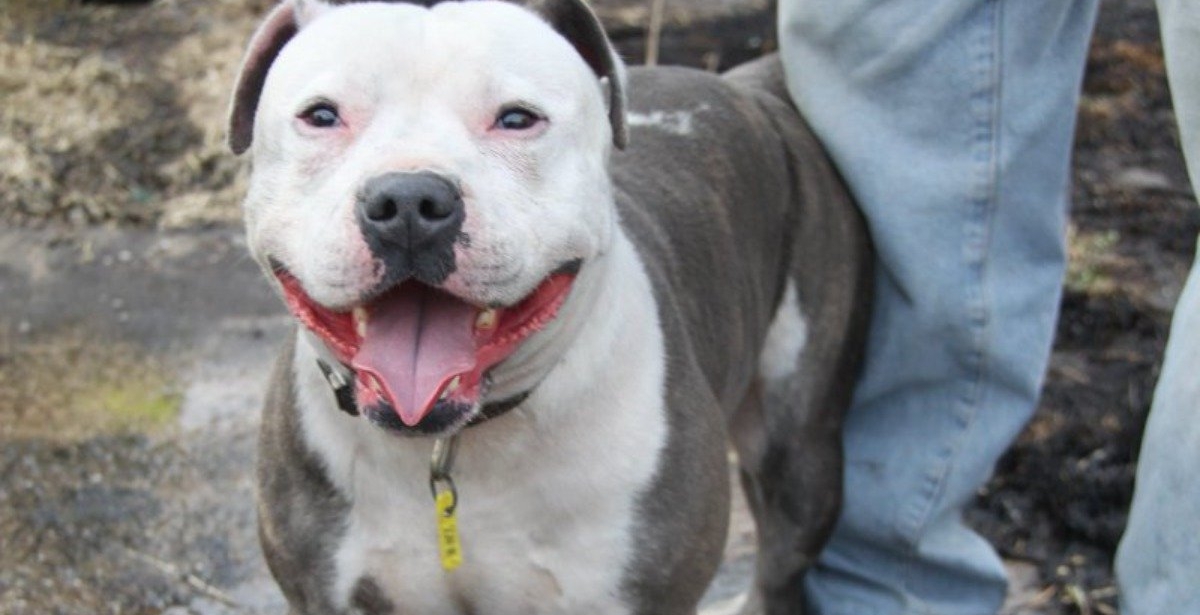 A lucky dog ​​named Dickie miraculously survived a fire that destroyed his owner’s home during the heatwave on Tuesday by hiding under a bed for four hours.

Edmund Penrose had to be dragged away from his home in Maltby, South Yorkshire, as an intense fire spread from nearby grassland and ripped through at least three terraced houses.

He was trying to battle the blaze with his hosepipe and get back inside to rescue Dickie when firefighters arrived at the scene.

His son Joe, who spoke to i stood among the ruins of his childhood home on Wednesday, said his father’s biggest concern was his beloved pet Staffordshire terrier.

Scared by the encroaching wild fire, Dickie ran into the house, rather than away from danger, as it went up in flames.

His fate seemed to have been sealed but miraculously, when firefighters were able to access the property after four hours battling the blaze, they found him alive.

“He was hiding under the bed,” Joe Penrose said. “We’re calling him ‘Lucky Dickie’ now.”

The cause of the fire that destroyed Mr Penrose’s home and that of his neighbors is yet to be confirmed but local residents believe a piece of rubbish, such as an aerosol, may have burst into flames when temperatures climbed above 40°C for the first time ever in Britain.

Joe Penrose is thankful his father, aged in his sixties, escaped physically unharmed.

“My dad will often have a nap during the day… he’d gone out to the shop when the fire started,” he said. “He came back and he saw it. He was lucky.”

Mr Penrose returned to the property to retrieve anything salvageable from his back garden on Wednesday.

The house has been reduced to rubble and now sits behind fencing with signs that read “demolition in progress”.

He was too upset to talk to i but his son Joe Penrose said finding Dickie alive had given his father a boost.

“There’s some fish in his pond he wants to save, some of them are 20 years old, but he’s lost everything else,” he said. “He wasn’t in a good way last night but when they got the dog he came back a bit.

“He lives on his own…it’s still sinking in. This is his whole life.

Paul Heffernan, area manager for South Yorkshire fire service, told i the number of calls they had received over the last 48 hours was unprecedented.

“We coped, but we were incredibly stretched,” he said. “It was to the point we had to prioritize incidents where there was a risk to life or property.”

In South Yorkshire, the fire service received at least 2,100 calls – similar to the number in London – but with a workforce a fraction of the size of the capital.

“It was an incredible effort. Despite the pressure firefighter welfare was our priority,” Mr Heffernan said.

“They were working in PPE in temperatures of 40°C – even in the high 20s it’s hard work. You’ve got the heat of the fire exacerbated by the heat of the weather, it’s incredibly challenging.

“I’ve served for 25 years – there’s no denying the climate is changing. That’s the way I perceive it in our industry. We’re getting busier.”

In Barnsley, residents say it took 45 minutes for firefighters to attend a shocking inferno which left around five homes burned to the ground.

The town has a fire station only a five-minute walk from where the incident occurred, but all units had already been sent out elsewhere.

Residents say they were told the nearest fire units available would have to come from Nottingham.

Labor has attacked the Government over its handling of the heatwave emergency, with deputy leader Angela Rayner saying ministers had gone “missing while Britain burns”.

In a fiery debate in the Commons, Cabinet minister Kit Malthouse said that “worked by and large the system” but acknowledged there were “some tragic deaths in water-related incidents”.

He added: “We do recognize that we are likely to experience more of these incidents and that we should not underestimate their speed, scope and severity.

“Britain may be unaccustomed to such high temperatures but the UK, along with our European neighbors, must learn to live with extreme events such as these.”