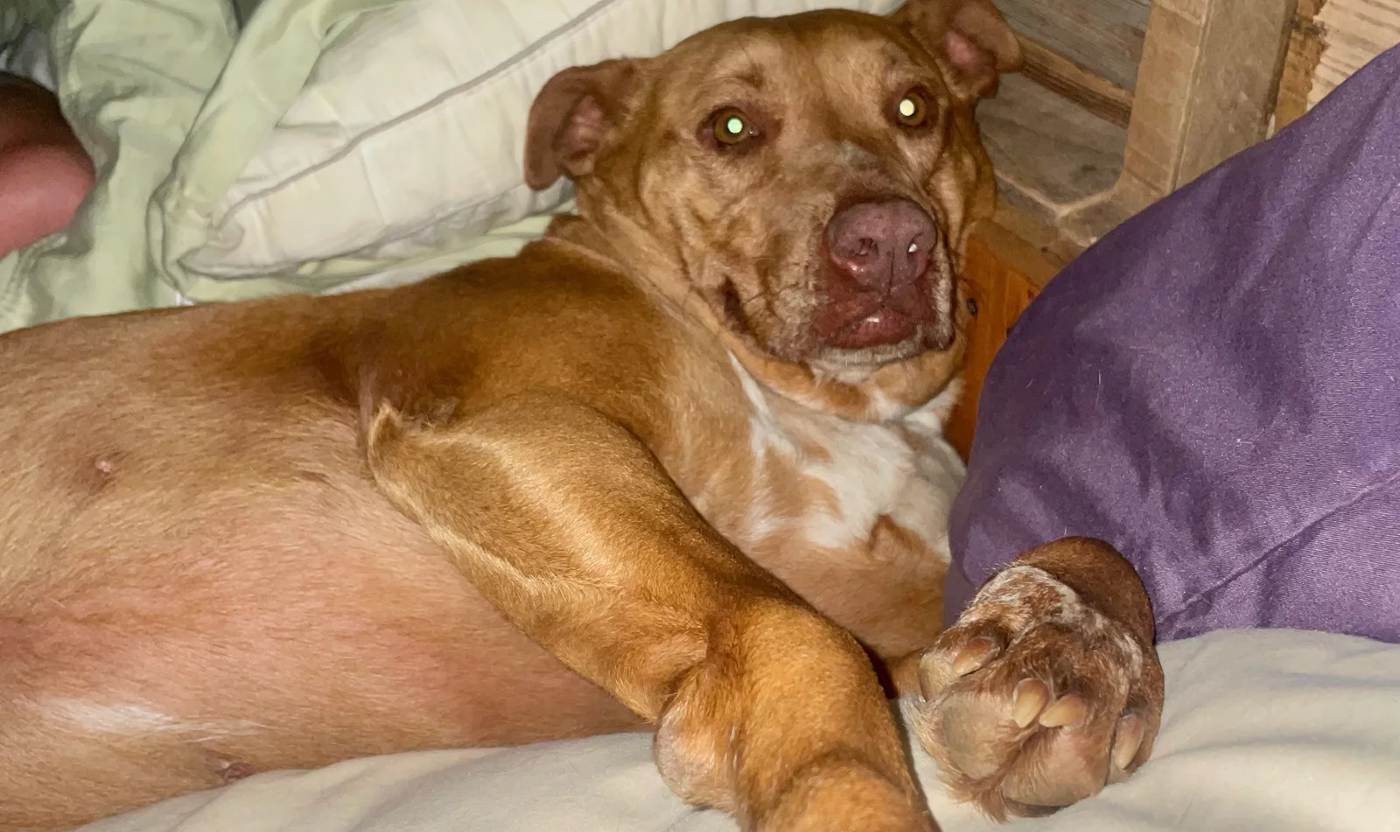 It could have been that a door was left ajar, or maybe a window, Julie Johnson from Tennessee isn’t sure; all she knows is that somehow, someway—a stranger was able to freely enter her house one night.

This stranger however wasn’t trying to steal, but only to snuggle. A brown bull terrier with a golden heart and silent feet crept into the Johnsons’ house, jumped right into bed next to Julie and her husband Jimmy, and went to sleep, head on the pillows.

“You could see light coming into our curtains in our bedroom and I feel my husband not just roll over, but kind of started, like almost a jump roll over and it woke me up,” Julie told NPR. “And in a quiet but stern voice, he said, ‘Julie, whose dog is this?'”

Despite the startle, in such a situation, it didn’t take long for Jimmy and Julie to realize the intruder meant them no harm, and was just “100% content being there.”

How Nala the dog managed to enter their house without disturbing or garnering the attention of Jupiter, Hollis, and Zeppelin, the three dogs who normally sleep alongside the couple, the Johnsons will never know, and it must have made for an interesting chit-chat over morning coffee.

Julie took to Facebook to see if she could locate the dog’s owners, posting a variety of selfies she took with the pup.

Not long after, Nala’s owners contacted them to explain she had slipped out of her collar on a walk the day before just ahead of a serious thunderstorm.

She had escaped into the woods, and between the four dog parents, the working theory arose that Nala had entered the Johnsons’ house out of fear of the thunder and lighting.

MORE: Zeus is the World’s Tallest Dog – Because Everything’s Bigger in Texas

“Our overly friendly pup, Nala, has hit an all-time record for ignoring personal space and added yet another trick to her long list of Houdini acts,” Cris Hawkins, one of Nala’s owners, wrote on Facebook.

“Shame [on] Nala for somehow breaking into a stranger’s house and invading their personal space. Thankfully, the couple thought it was hilarious and they aren’t even mad about it.”

Since the incident, the four pooches have had playdate in the park, celebrating their new, and entirely accidental friendship.

RAISE a Paw For This Fun Story; Share It With Pals…