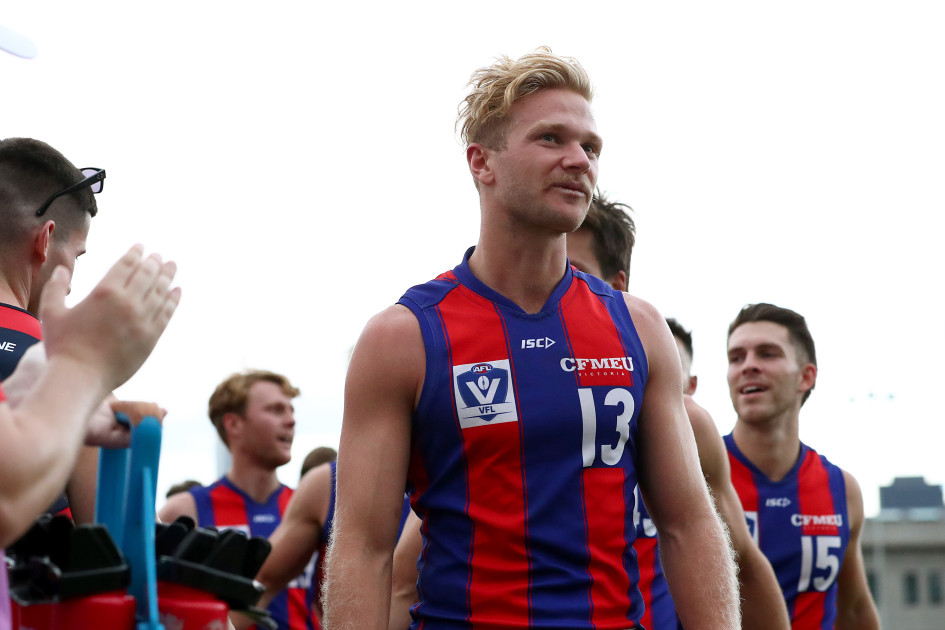 Corey Wagner admits it was unexpected to hear his name called out by Fremantle on Tuesday night.

The 25-year-old was drafted by the Dockers with pick 57 in the 2022 National Draft, finding his home at a third AFL club.

Wagner had previously spent time at North Melbourne and Melbourne, playing a total of 19 games across three seasons.

He was with Port Melbourne in the VFL last season and in 2023 he will return to the AFL scene after the Dockers took a chance on him, much to his surprise.

“I didn’t really expect it to be honest,” he said on SEN Mornings.

“I was ready for bed. We were at the pub and came home to watch the last little bit (of the draft). ‘I’ll watch this pick and then we’ll go to bed’.

“Then everyone erupted, a few of my housemates and my partner Mikaela.

“It was pretty special, but it hasn’t really sunk in yet.”

Wagner insists he is a better player since he parted ways with Melbourne in 2019, adding further confidence and consistency to his game.

“There’s a bit more confidence in myself now,” he added.

“I know what I can do, I know my strengths and weaknesses. I’ve definitely got my head sorted out, I think that plays a massive part on the footy side (of life).

“I’m definitely a more consistent player now, I know what I need to do to have a good game and help out the team as much as I can.”

Were there discussions with the Dockers prior, or any interest from other AFL clubs?

“One meeting (with Freo), and I knew they were interested but nothing really solid,” he said further.

“I left it up to the manager, I said, ‘that’s your space, Timmy Batty’. He said, ‘You just keep playing footy, keep doing what you’re doing and hopefully it all works out’, and he’s done it.”

Since his last taste of AFL action a few years ago, Wagner insists he simply had to keep the dream alive.

“I never gave up. If you’ve given up on your dream it’s not a great place to be,” he continued.

“The year after (in 2020) I struggled to find my feet but I was never going to give up. There wasn’t really nibbles until the second half of this year.

“I was always going to keep having a crack until I was done playing.”

Wagner spent time as a small forward during his early AFL days but flourished across half-back in the VFL with the Borough in 2022.

He is one of four players the Dockers recruited in the National Draft alongside Hugh Davies (pick 33), Tom Emmett (pick 41) and Max Knobel (pick 42).

The former Kangaroo and Demon is the only player previously on an AFL list to be selected in this year’s National Draft.