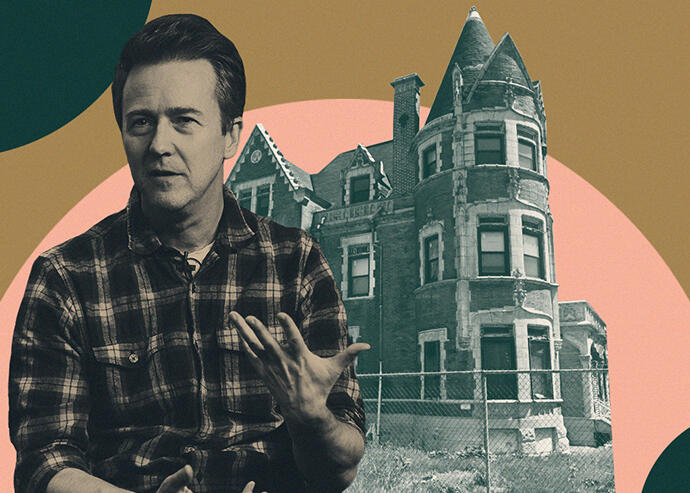 Edward Norton’s character in “Fight Club” said, “I felt like destroying something beautiful.” His actions are proving the opposite.

Norton is among those pushing back against plans by developer Tomer Erlich to buy the Jacob Dangler House at 441 Willoughby Avenue in Bedford-Stuyvesant and turning it into a condominium complex, the New York Daily News reported. The actor filmed part of “Motherless Brooklyn” at the 120-year-old mansion.

“This house, which has served a shifting but significant purpose for over a century, should absolutely be viewed as not just a spiritual and aesthetic connection to the past but as a major city asset,” Norton wrote to the city’s Landmarks Preservation Committee. The group is holding public hearings on whether to designate the mansion as a landmark.

The French Gothic mansion’s origins date back to the beginning of the 20th century, when it was built for meat packer Jacob Dangler. The house later served as a clubhouse for the Grand Chapter Order of the Eastern Star, a masonic organization.

Opponents of the landmark proposal include the mansion’s owners, who have struggled to rent the property during the pandemic, leading to mounting debt and a desire to sell.

“Our fear is that if the property is landmarked nobody will want it because they will not be able to do anything with the building,” a lawyer for the owners told the LPC.

According to Brownstoner, Erlich wants to demolish the mansion to make way for a seven-story, 44-unit property. The sale of the property is said to be the way to block a foreclosure auction, because the property has a $2.3 million lien.

A representative speaking on behalf of the Grand Chapter said Erlich was chosen to buy the property because he committed to including affordable apartments and a community facility in his development. The building would include at least 13 affordable units and could be built as-of-right.