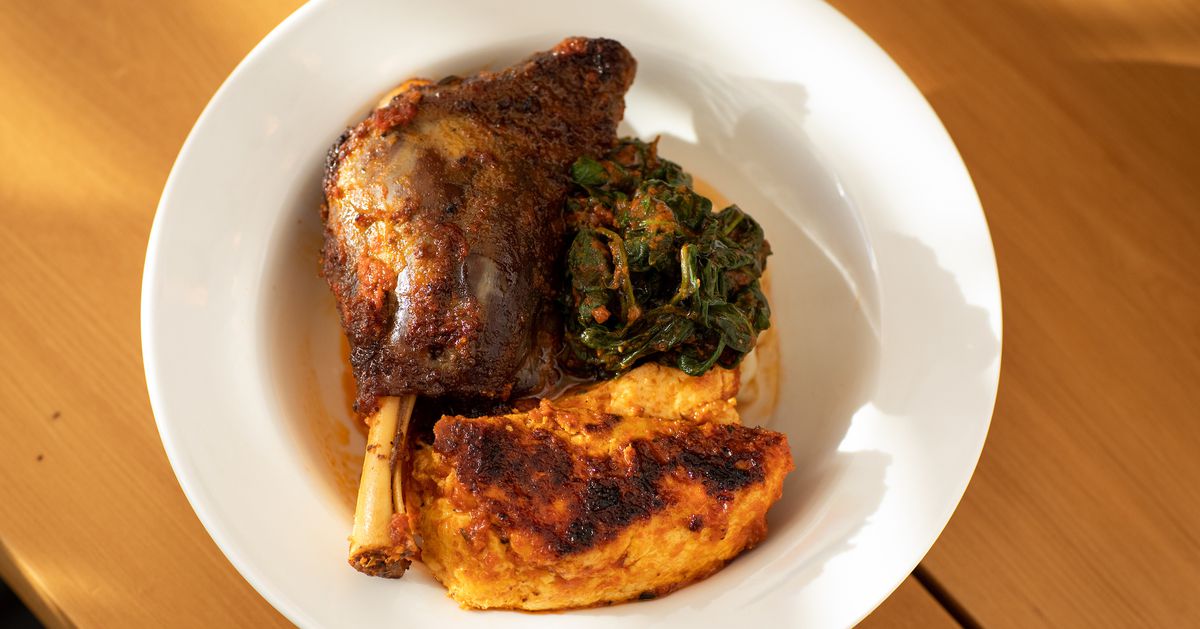 When Ayo Balogun opened Civil Service Coffee in Bed-Stuy in 2013, it was a fairly no-nonsense coffee shop that became a neighborhood staple — until a few years ago, a car tragically crashed through the storefront and it closed. Months later, Balogun reopened the cafe under a new name, the Rat, with a more elegant look. It was here that he started thinking more about how he could infuse his Nigerian roots, like incorporating pepper and tomato-based Obe sauce into his egg sandwiches — flavors he’d experimented with at pop-up dinners that his now closed Bed-Stuy restaurant, the Trade Union Cafe, which opened in 2015.

During the pandemic, at a time when people were craving more events they could safely attend, Balogun brought back the dinner pop-ups he became known for at Trade Union, which opened on the sidewalk of the newly opened Council Coffee Shops took place. On Saturday, January 15, Balogun, along with the Dept of Culture (pronounced Department of Culture), will open a permanent restaurant inspired by these dinners, located at 327 Nostrand Avenue near Quincy Street.

“To be honest, during the pandemic I’ve really just been looking for something fun that highlights my culture,” Balogun says of the pop-ups. But the dinners inspired Balogun to focus more on the food he grew up eating in the state of Kwara, and he found himself looking for a permanent place to be a consistent host with a Nigerian-focused menu that could bring together neighbors from near and far.

With Dept of Culture, Balogun aims to showcase Nigerian cuisine with an eye on his home state in north-central Nigeria. He hopes the restaurant can at least underscore the regional differences across the continent. “African food gets lumped together so often,” he says angrily. “There is [so many] spoken languages ​​in Nigeria alone…think of all the different foods that come with it.”

A selection of dishes at the Ministry of Culture.

A lot is still in flux as to how the Department of Culture will run on a day-to-day basis. The format of the tasting menu is subject to change, but Balogun, who is currently the chef and owner, plans to offer a three-dishes tasting menu for $60 with a la carte options.

Balogun imagines the experience at the Ministry of Culture to be different than at his cafes. Overall, the concise menu tries to mimic the feel of cafes in Nigeria, but positions it more as something resembling an upscale restaurant.

Throughout January, diners will find fresh fish pepper soup on the stove, a dish he says he has fond memories of growing up, which was known to be particularly spicy in his home. His version uses swordfish instead of the usual tilapia or catfish.

Suya – the popular Nigerian street food of grilled skewers, often served with red meat – is offered here with a choice of mushroom, squid or chicken. However the menu evolves, Balogun says he wants to keep the dishes traditional, like “an aunt could make them,” but he also wants options for all types of diets. So he decided to make his version of Jollof rice — an add-on option to the menu — without chicken or goat broth to keep the dish vegan.

The last of the three courses consists of mashed yam with efo riro (stewed vegetables), wara (a milk curd recipe specific to his home state of Kwara), with a choice of protein such as striped bass or leg of lamb.

For dessert, there’s a little free “surprise” of roasted plantains sautéed in maple syrup and served with ice cream.

For every Balogun hospitality business, he sees food and beverages as just the beginning. The Ministry of Culture’s name commemorates Balogun’s upbringing in a family that worked for various arms of the Kwara government. He hopes the new restaurant will be a place where people can come to eat, share art and talk politics. To this end, the art will rotate through the space and a record player will play old Nigerian albums.

With only 16 seats in the restaurant — divided between a communal table and a few counter seats — even the “most shy” diners, Balogun says, should give eaters a chance to meet someone.

To start, Balogun is offering two dinners a night – likely at 6pm and 8pm – which need to be reserved in advance on Tock (which will be going live shortly) or via Instagram DMs. The restaurant is open from Tuesday to Saturday, breakfast – open without reservation – follows.