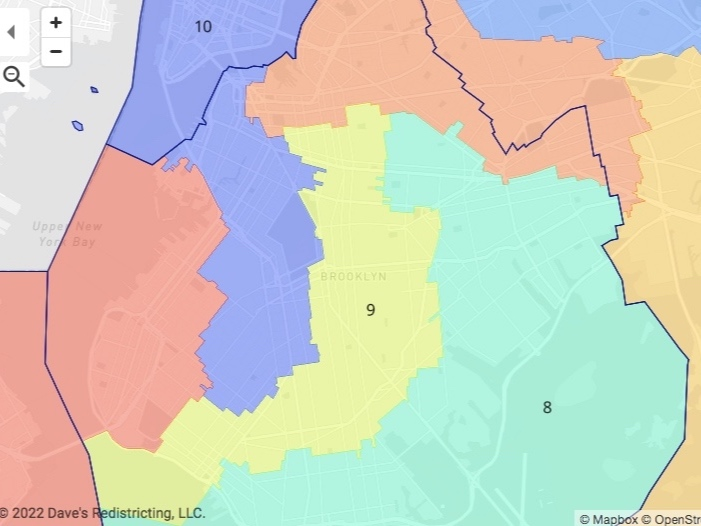 BED-STUY, BROOKLYN — A “long dark history” is set to repeat itself should a congressional redistricting plan splitting up Bed-Stuy become a reality, according to neighborhood leaders.

Several officials from Bed-Stuy are urging the court to reject redrawn New York congressional districts released this week, which they contend harkens back to pre-1960s gerrymandering of the historically Black neighborhood.

The draft maps would divide Bed-Stuy in Congress for the first time since a 1968 court ruling that allowed for the win of US Rep. Shirley Chisholm, the first Black woman elected to the legislature, leaders point out.

“The gerrymandering of Bed-Stuy has a long dark history which we had expected not to be repeated with such blatant disregard for the residents who call Bed-Stuy home,” wrote Community Board 3 District Manager Henry Butler. “By splitting up Bed-Stuy so carelessly, these arbitrary divisions will only serve one purpose: diluting our representation.”

Chisholm’s historic 1968 victory came after a lawsuit that successfully claimed Bed-Stuy had been made “politically impotent” by gerrymandering that divided it between five congressional districts, according to the court letters and records.

Under the newly-drawn map, Bed-Stuy would be split between US Rep. Yvette Clarke’s 9th District and its existing 8th District, which is represented by US Rep. Hakeem Jeffries, the map shows. Specifically, the borders of Clarke’s 9th District would move up from the edge of Crown Heights to cover most of the western portion of Bed-Stuy, extending as far as Lewis Avenue.

Butler is among several leaders who sounded the historical alarm in public comments about the map sent to Steuben County Supreme Court Justice Patrick McAllister, who on Friday will decide whether to accept the draft maps drawn up by court-designated special master Jonathan Cervas.

Cervas’ proposal comes a month after the state’s top appeals court declared Democratic-drawn congressional and state Senate maps were unconstitutional and literally sent them back to the drawing board. Democrats — who faced accusations they gerrymandered districts — were shut out of this process.

US Rep. Hakeem Jeffries — whose own 8th District would be split by the maps — has jabbed publicly that the new Cervas-drawn boundaries “would make Jim Crow blush.”

“Considering the plight of Black families and elders in this state, we should embrace their voices as opposed to supplanting their decisions with those of an unelected white technocrat from outside of New York City,” he wrote to the judge.

Colvin Grannum, president of the Bedford Stuyvesant Restoration Corporation, points specifically to the neighborhood’s need to advocate as a unit for its public schools, transit hubs, police precincts and business corridors like Fulton Street or Atlantic Avenue.

A unified Bed-Stuy district is more important than ever given rapid gentrification in the neighborhood, he argues.

“I’ve seen firsthand how our community members are struggling as the cost of living continues to rise and life-long neighborhood residents are being pushed out of the places they’ve called home for generations,” he wrote.

“Our diverse and tight-knit neighborhood is undergoing rapid change and, to meet the challenges that come with this, it is imperative that we have stability and consistency in our representation to best advocate for our community’s needs as a whole — as we have had the ability to do for over five decades.