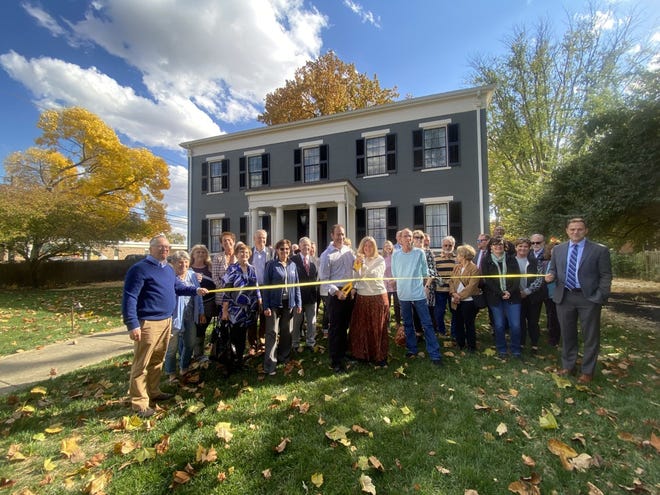 CHILLICOTHE― After three years, the renovations of one of Chillicothe’s oldest buildings are complete and the Willis-James Bed and Breakfast is open for business.

Drew Musser and Steph Moore bought the building in 2019 and began to restore and renovate the five-bedroom home. They initially intended to fix up the house and flip it. However, after learning the history of the house, the duo decided to do a full restoration. The team aimed to preserve as much as the original architecture as possible, while still adding modern necessities.

The property was named from Nathaniel Willis and Thomas James, two historical figures who owned the home in the 1800s.

The home was built in 1805 by Nathaniel Willis, an apprentice to Benjamin Franklin, a participant in the Boston Tea Party and a newspaper tycoon. He owned and edited several newspapers, including the Scioto Gazette, now named the Chillicothe Gazette.

Thomas James was a banker from Chillicothe who started the first iron forge west of the Mississippi.

The rooms may seem modern at first glance with plenty of 21st-century amenities and a simple and sleek design, but a closer look at the architecture will show large pillars, original stained glass, vintage hardware, original fireplaces and more.

The official ribbon-cutting for the Willis-James Bed and Breakfast was held Oct. 13 and visitors toured the historic home. Mike Throne, CEO and president of the Chillicothe-Ross Chamber of Commerce, said it takes special people to renovate a home like the Willis-James.

“This is truly an amazing architectural wonder in our downtown… It’s in the fashion of the Carlisle Building, the Warner hotel, Union Block and soon the Wissler Concert Hall,” Throne said. “We’re really truly standing at another great first capital success story.”

Bob and Nancy Biggs were the last owners of the home before selling it to Musser and Moore. Musser said the couple was “essential with helping me understand what the house used to look like as we’re trying to restore this thing.”

The family aided in the restoration by explaining to the new owners how the house was utilized by the family, what type of furniture they owned and the layout of the house.

Bob and Nancy Biggs, along with their daughter Debbie Donohue, went to the ribbon-cutting to see how the home has changed since the restoration.

Donohue said she remembers spending holidays at the house with family when she was a child. She said she used to ride her bike around the home. With years of childhood memories at the historic building, she said she was grateful to see it restored.

The family said many of the artifacts in the home were donated to the Ross County Historical Society. They also donated a binder full of photographs and history from the home.

“We’re very thankful to have Drew and Steph come in here and really embrace the heritage and history of the house,” Nancy said. “It’s really nice to come up here, it’s like stepping back a little bit into history.”

The Willis-James Bed and Breakfast is located at 58 W. 5th St. For more information, visit thewillisjames.com.

Megan Becker is a reporter for the Chillicothe Gazette. Call her at 740-349-1106, email her at [email protected] or follow her on Twitter @BeckerReporting.