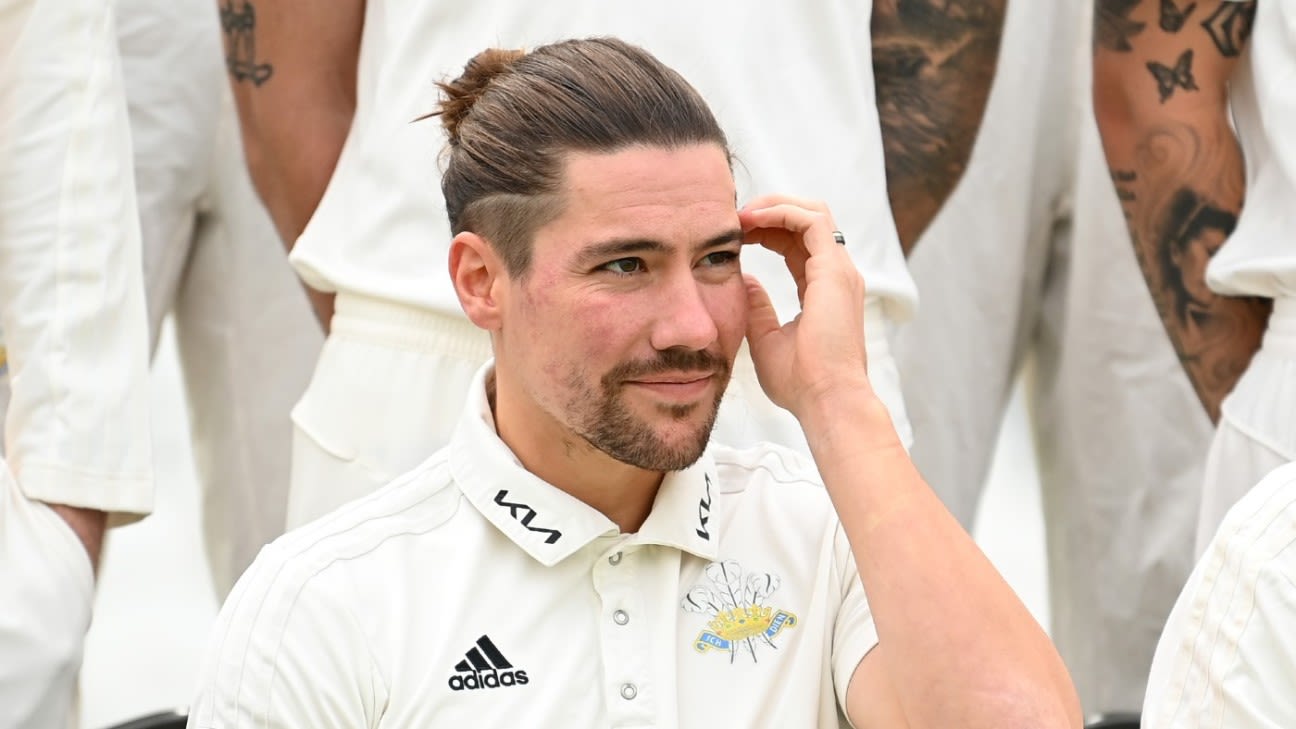 You get the impression from talking to Rory Burns that he’s not a big fan of communication. He speaks rather as he bats, with a palpable nervous energy as he weighs up the threat of each incoming question, before an understated response that can, with the right timing, be thoroughly emphatic all the same.

Since the retirement of Alastair Cook in 2018, no England opener has played more times, scored more runs, nor averaged higher than Burns’ mark of 30.32 over a sustained run in the role. And yet, twice in as many winters, Burns has fronted up for Surrey’s pre-season media day cast in the role of the outsider.

In 2021, he had lost his place on a tough tour of India, ground down by the Covid bubble lifestyle after missing the Sri Lanka tour for the birth of his daughter Cora; and now here he is in 2022 as well, back to square one once more after becoming the unwitting poster-boy of another calamitous Ashes campaign.
“Did I visualize getting a first baller? No I didn’t,” Burns says, when asked – not for the last time, you suspect – to rewind to that gruesome first morning in Brisbane, as he topped across his crease to Mitchell Starc’s full-length swinger, and was bowled round his legs by the very first ball of the series.

It is already a moment immortalized in Ashes legend – alongside Nasser Hussain’s infamous bowl-first call in 2002-03 and Steve Harmison’s wide four years later. And while Andrew Strauss’s own first-over duck in 2010-11 stands as lasting proof that one early setback need not define a tour, it’s hard to argue that England’s 2021-22 challenge ever recovered its poise from that moment.

Only a tenth-wicket stand in Sydney stood between Australia and their third 5-0 whitewash in five home campaigns, and Burns himself certainly didn’t recover. After a top score of 34 in the second innings at Adelaide, he was dropped for the Sydney and Melbourne Tests, before a belated return to the front line after Haseeb Hameed’s own failings had become too pronounced to ignore. Two more insubstantial scores ensued in Hobart – 0 and 26 – and that was it for Burns’ winter, as he was axed for the subsequent tour of the Caribbean with Durham’s Alex Lees handed the role of nuggetty senior pro.

“It’s obviously not my decision,” Burns says. “It’s out of my hands so I had to deal with what I’d been dealt. What can I do now? What Jimmy [Anderson] said resonated with me the other day. I’m still looking to improve, still looking to get better. I think that I can. I’ll go again and try to score runs.”

In such sliding-doors circumstances, it’s easy to imagine how Burns could have spent his every waking moment since Brisbane chastising himself for his error, and wishing he could have his time over again. But though he admits the immediate aftermath was tricky – particularly given how his quirky technique lent itself to high-level dissection in the Australian media – he’s adamant that the indignities are behind him and he’s ready to go again.

“I’ve kind of put it to bed, to be honest,” he says. “It takes a little bit of time, a little bit of reflection. Taking stock of your thoughts and feelings as it goes along. With Covid and bubbles in recent times it’s been quite intense, and the Ashes was probably the most intense process we’ “Ve been through. It’s quite a big hype train that everyone maybe gets a little too involved in at times. It can be difficult.”

“But I’ve got a little one at home, I’ve got my wife. They give me perspective,” he adds. “They were with me throughout the Ashes. It was nice to get away at times. I always like getting away from cricket. I had some good time off when I came home, lots of family time. I reassessed my game and tried to work on various things from a technical aspect, just little tweaks I could make to then go again.”

However, if Burns’ first-baller was the start (and finish) of the Ashes proper, then a full appraisal of England’s awful tour needs also to take in the hugely restrictive circumstances of their series build-up. As if the strictures of lockdown life weren’t complicated enough, the ceaseless rain in Queensland ensured that the whole team went into that first test with perhaps the least satisfactory preparation in Ashes history, just one day of middle practice possible in their scheduled warm- up fixture.

“The odds weren’t in our favour, were they? It was always going to be an uphill battle with that prep that we did get. The run-in was suboptimal. Getting used to conditions was suboptimal. That led to its starting the series on the back foot.”

It led also, Burns admits, to a fatal lack of alignment at the crease for when the big Brisbane moment came. “To be honest, in the limited practices we did have I was feeling pretty good,” he says. “Certainly technically, looking back on it, it probably crept in slightly. Preferably if that had been flagged marginally earlier that could have helped. It wasn’t.

“Like I say, I’ve put it to bed, put some tweaks in. You trust in the people you trust and go again. It was tough, it proved to be tough. But I’ve rationalized it by talking to people I trust, and then getting back on the wagon.”

Getting back into the England team, however, might yet prove to be a tougher challenge. Despite the encouragement of Gareth Batty, Surrey’s new head coach, who insists Burns is still the “best opener in the country”, the fall-out of the Ashes loss seems to have focused as heavily on the dressing-room atmosphere as on the proficiency of those within it.

And in that respect, the implication – encouraged by Joe Root’s and Paul Collingwood’s repeated emphasis on the renewed positive energy during the Caribbean tour – is that the mood within the squad has been improved by the removal of certain senior individuals who perhaps did not give back enough when the going got tough in Australia.

“I don’t think so. That would be unfair,” Burns insists. “The talk is more on the fresh faces in the squad and they had a chance to put their own stamp on it. It would be unfair to say that.”

Nevertheless, were it not for his axing, Burns might otherwise be a strong contender to take over as captain from the beleaguered Root. At the age of 31, he’s the right age for higher honours, and as Surrey’s captain in their Championship-winning season in 2018, he’s one of the very few England players of recent vintage with genuine experience of leadership outside of the international game.

“I think I have to get back in the side first,” Burns says. “I’m not sure you pick your captain from outside the best XI in the country. Quite frankly Rooty is the man in position and he’s obviously doing very well with the bat and it hasn’t compromised his ability to bat. So I’ ll let you draw on that what you want to draw on. I think you pick your captain from your best XI.”

Burns’ immediate focus is on the start of Surrey’s season. First up is a trip to Edgbaston on April 7, before back-to-back home games against Hampshire and Somerset – meaning three consecutive fixtures on some of the truer surfaces on the county circuit, and potentially the chance to build up a body of work that gets his name firmly back into the frame before New Zealand’s arrival for the Test summer in June.

“I don’t want to give too much away because there are county attacks looming around the corner,” he says. “But I just think, for me, those first 20 balls, [I will] tighten up fractionally. And then, as I’ve proved, once I get into an innings I generally go quite alright. So for me [I have to] look at my starts, get in and build.

“It won’t be the same [as Australia] here in April in the County Championship when things tend to be greener and slower. It’s all about adapting. That’s batting in a nutshell. Wherever you go, whichever attack you face, you have to adapt to what’s in front of you. It will be no different come next week.”

Rarely has the county season begun under quite such a level of scrutiny, however, with England’s winless winter highlighting the growing gulf between the standards on England’s domestic circuit and the levels required at the very top. And it wasn’t only Burns who struggled with the step-up in Australia – his Surrey team-mate, Ollie Pope, was similarly exposed, even though his current average at the Kia Oval, 99.94, implies he could not be doing more to meet the standards to which he has been exposed.

“I’m not really drawing mine and Ollie’s name into that,” Burns said. “The potential failings of county cricket are quite obvious. [In Test cricket] you face attacks of Starc, Cummins, Hazlewood, Lyon. You don’t get too many attacks that come at you like that, day in and day out, where half a mistake is exaggerated to a definite mistake. And potentially the system doesn’t fit that with the volume of cricket we now play across four formats. You’re basically struggling to get what you need in six months to produce your best teams for England.”

Despite Burns’ gruff insistence that he’s ready to go again, Batty is conscious that his captain is potentially more wounded by his experiences this winter that he is willing to let on.

“I don’t worry about him putting the best case across, but I worry about who might select the [England] team,” Batty says. “But that is not our concern. He’s our leader. He is our captain. He has done a wonderful job over a period of time. Now we need to give him a bit back.

“He needs us to take care of him for a moment, because it is difficult. It doesn’t matter who you are, when you get left out by England and come back. So we need to make his life easier, show that we ‘ve got him – because we definitely do – and hopefully create an environment for him and for the rest of the boys where he can thrive, and shoot for the stars.”

And for the time being, all Burns can do to rebuild that bruised reputation is to get stuck in with Surrey, and feed off the optimism that tends to accompany the early weeks of a new season.

“Look around the dressing room and I feel like I’ve got about 10 years older,” he says. “I probably have because I’ve been around here for so long. There are a lot of young guys, a lot of learning there. That is for us as senior players to take on, share the knowledge around the room and pass it on. “