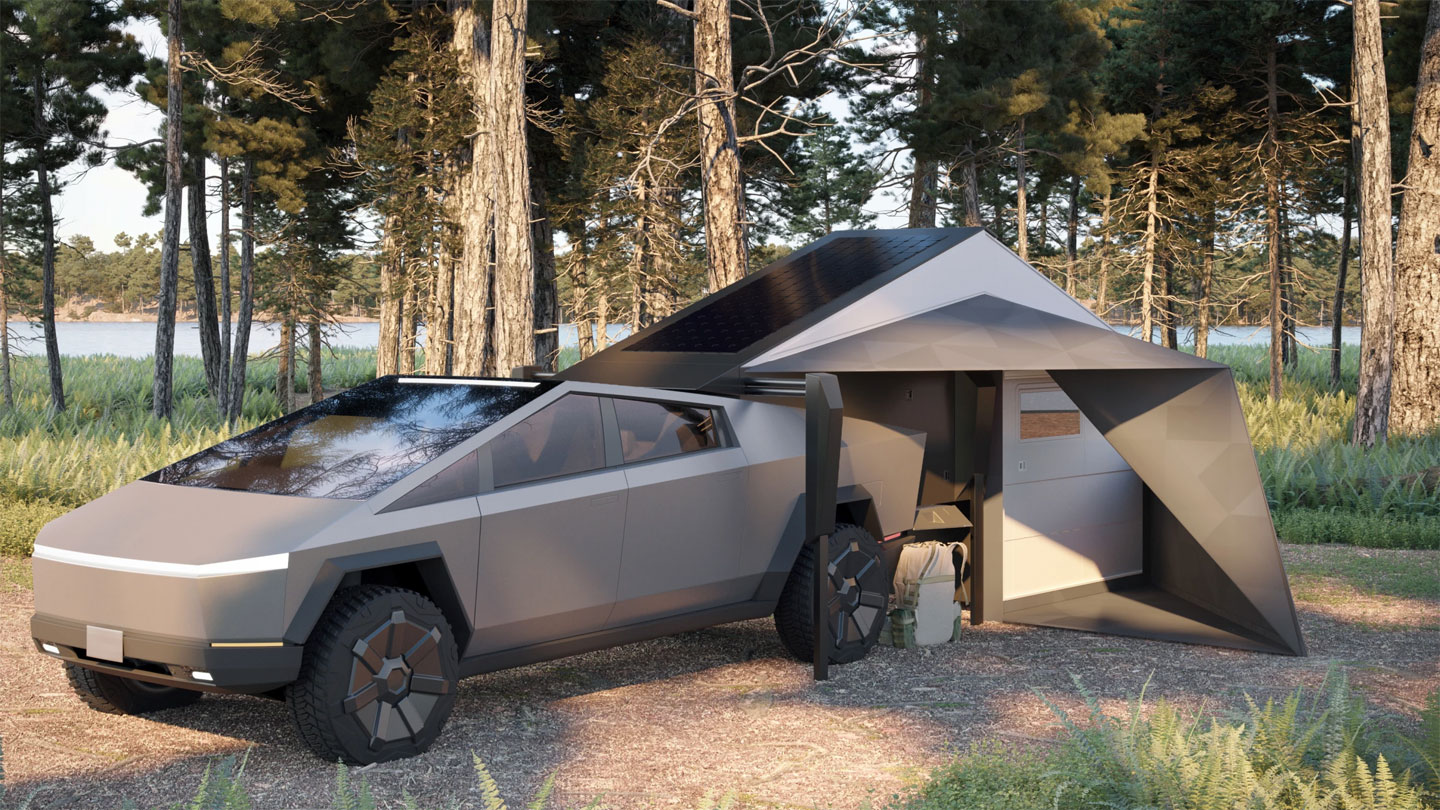 Form Camper has introduced an interesting new camper that works with multiple truck models. The Form Camper would work with anything from the upcoming Tesla Cybertruck to the class-leading Ford F-150 pickup. The camper seems to have been specially developed for the still-released Cybertruck, but is not limited to this vehicle. It uses a rectangular box shape that fits in the back of almost any truck.

As soon as it is extended from the loading area of ​​the truck, the camper can be fully extended using an electric drive system. Part of the Form Camper remains in the loading area of ​​the truck and forms a sleeping area, while the rest of the retractable camper protrudes over the rear of the truck and creates a room at ground level. A hard roof covers the entire space in the camper.

In use, the camper would have a floor space of 71 square feet inside as well as a door that allows the user to get in and out of the camper as needed. Form Camper would also have two nylon ripstop canopies on each side to provide some sheltered outside space. When used in an environment in which the truck owner may want to go off-road or use the pickup for other purposes, the entire camper can be used as an independent unit away from the vehicle.

According to the manufacturer, the entire deployment and setup of the camper takes five minutes. The double bed fits into the pickup bed and is folded in half for storage in the camper. The user has to pull out the hob and sink as well as the separate worktop if necessary.

The kitchen area has a fridge / freezer as well as drawers and cupboards for storage. Another interesting feature is that the camper uses bi-directional slides and double sided cabinets to allow the kitchen to be used inside or outside the cabinet. There is also a padded bench seat on the back wall of the cabinet that can be removed to serve as a wet bath with a portable toilet, wall-mounted shower, and privacy door.

The camper is expected to run entirely on battery power, using either a 300 Ah high cycle lithium-ion battery or the battery of an electric vehicle like the Cybertruck or the F-150 Lightning. However, to extend the battery life, the Form Camper has a 400 watt solar charging system on the roof. It also has the capacity to store 189 liters of fresh water under the bed and is equipped with a reverse osmosis system for purifying water from lakes and rivers.

The camper consists of an aluminum honeycomb embedded between carbon fiber. The estimated dry weight is 1,000 pounds, and if it were filled with water it would weigh 1,300 pounds. It would be offered in a single size of 9.8 x 4.4 x 3.4 feet when compressed into its box shape. It would fit in any truck bed that is between 5.5 and 2.4 meters long. However, it would work with shorter loading areas, but would require a bracket mounted on the coupling for stabilization during removal.

While the Form Camper is aimed directly at users of electric pickups, it won’t work for the Rivian R1T because that truck has a very short 4.5-foot bed surface. The company plans to complete its second prototype by the second quarter of 2022 and notes that its specifications and features may change. Production is scheduled to start in the second half of 2022 with a limited edition of 500 units. The price is expected to be around $ 69,500. However, those who do make a $ 10,000 deposit will get one unit for $ 49,500, with the offer limited to just 25 units.