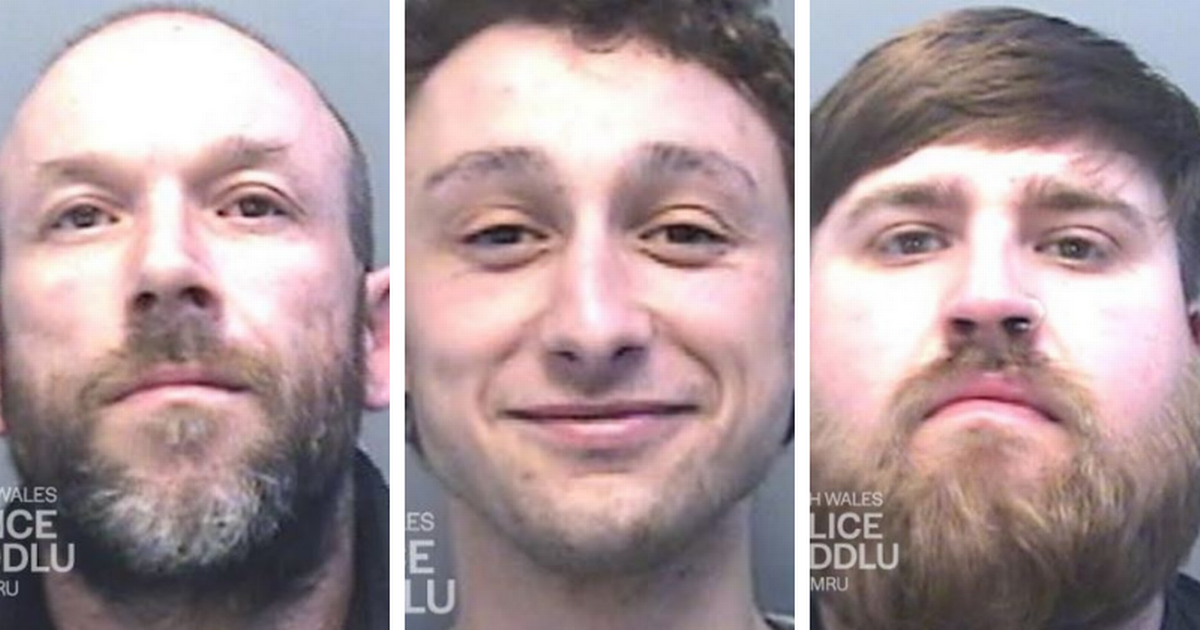 When police raided a house being used as a base by drug dealers they found a missing woman hiding under a bed – and an electronic bank card reader which customers could use to pay for drugs. Inquiries led police to a second house in Swansea being lived in by two former Army friends – in this property officers found almost £31,000 worth of cocaine, along with a cannabis-growing operation and a 9mm bullet which was a “souvenir” of military service .

Swansea Crown Court heard that police intelligence led officers to raiding a house on Heol Gwyrosydd in the Penlan area of ​​Swansea on October 3 last year. Craig Jones, prosecuting, 41-year-old Gino Alemanno was in the property, and officers found an electronic bank card reader in the living room, £3,580 cash in an envelope in the kitchen, and paraphernalia associated with the preparation and supply of class A drugs including quantities of cutting agent used to bulk out deals.

Alemanno himself was found in possession of two ready-to-go cocaine deals. The court heard that when the upstairs of the house was search officers found a woman called Siobhan Clayton, who had previously been reported as missing, hiding under a bed.

Read more: A pedophile who tried to groom a young girl on Instagram was caught after a mum became concerned about changes in her daughter’s behavior

The prosecutor said while officers were in the house a man called Adam Hopkins arrived at the address – the 25-year-old was detained and searched, and found to have more than £4,000-worth of cocaine in his jacket pocket. A number of phones were seized and checked, and they were found to contain messages relating to the supply of cocaine as well as references to preparing or “washing” crack cocaine.

Inquiries led officers swoop on a house in Wern Terrace in the Port Tennant area of ​​Swansea the following day. Present at the property were former Royal Logistics Corp soldiers Jake Dear, aged 28, and 33-year-old Stephen Jones. Officers recovered a stash of 306g of 77 per cent pure cocaine – worth close to £31,000 – as well as a cash, a 9mm bullet, and an Armani-brand watch belonging to Dear. One of the bedrooms of the house had been given-over to the production of cannabis with 18 plants in a growing tent linked to a water butt and watering system.

The court heard that while police were in the house Dear’s mobile kept ringing, and when officers examined it they found bulk text messages relating to drug dealing had been sent to some 80 contacts. Mr Jones said a number of the outgoing text messages were “particularly telling”, including one where Dear seemed to be telling a contact that he had been “saved by moving to Swansea” and that he is now “supplying the city with all the best things”. In another text Dear seemed to be boasting that while he was in Swansea he was under investigation for drug offenses in another part of the UK.

Gino Guiseppe Alemanno, of Heol Gwyrosydd, Penlan, Swansea, had previously pleaded guilty to being concerned in the supply of cocaine when he appeared in the dock for sentencing. He has previous convictions for producing cannabis and for breaching a restraining order.

Adam Michael Hopkins, of Elan Avenue, Clase, Swansea, had previously pleaded guilty to possession of cocaine with intent to supply and to being concerned in the supply of cocaine when he appeared in the dock. He has previous convictions for possession of an offensive weapon, the simple possession of cannabis, and driving while disqualified.

Dear, of Wern Road, Port Tennant Swansea, had previously pleaded guilty to possession of cocaine with intent to supply, the simple possession of cocaine, being concerned in the supply of cannabis, and possession of ammunition without a firearm certificate when he appeared alongside the co-defendants. He has a previous conviction for drink-driving.

Jones, also of Wern Road, Port Tennant, had previously pleaded guilty to production of cannabis and being concerned in the supply of cannabis when he appeared in the dock for sentencing. He has a previous conviction for aggravated vehicle taking.

John Allchurch, for Alemanno, said the defendant had a 12-year-old daughter and had been a HGV lorry driver until being laid off during the Covid pandemic. He said his client had developed a cocaine habit during the lockdown and had turned to dealing to fund his own use – and said while being held on remand in prison had been working in the laundry and in the kitchen.

Giles Hayes, for Hopkins, said his client had been using cocaine daily at the time of the offense, but was now drug free in prison and would continue to work towards ridding himself of his addiction

David Leathley, for Dear, said his defendant had served in the armed forces and had be kept the bullet recovered from the Port Tennant house as a “souvenir”, though he said it was accepted that in so-doing he had committed “a gross breach of trust”. He said his client had been living in the Portsmouth area where he had experienced “a number of traumas” and had then fled to Swansea after being offered a safe haven by his former colleague Jones.

Read the incredible story of how a £100,000 robbery at traffic lights in Swansea led police to busting an cocaine-dealing organized crime group with links Albanian gangsters.

The barrister said the text messages where Dear had been seen to be boasting about the scale of his drug-dealing in Swansea was “banter” sent in response to people ribbing him about “how low he must have fallen in life if he had ended up in Swansea”. He added that the dad of a three-year-old daughter was now looking to a future without drug addiction, and that he had undertaken a number of courses while being held on remand in Swansea prison and had nothing but praise for the staff in the institution who had done more than anyone else to help him.

Hywel Davies, for Jones, said his client had no involvement in the Class A drug dealing, with no forensic links to the cocaine and messages on his phone only relating to cannabis. He said the defendant had already done a significant amount to rehabilitate himself while awaiting sentence.

Judge Paul Thomas QC said it was clear Dear had been running a substantial drug supply operation, including supplying to Alemanno and Hopkins who were in turn supplying others. He told Jones that he had clearly been “tied up in a drugs operation being run by his former colleague” but was only being sentenced for the Class B drug offenses

With discounts for their guilty pleas Alemanno was sentenced to a total of two years and eight months in prison, Hopkins to three years, Dear to four-and-a-half years, and Jones to 14 months. The court heard that Jones has already spent eight months in prison on remand, and as he would ordinarily have been released at the half-way point of his sentence he has in effect already served his sentence and so will be immediately released. A Proceeds of Crime Act investigation will now be conducted into the four defendants, which will give the courts powers to seize any of their assets gained from their drug dealing.

You can sign up for our regular Crime & Punishment newsletter here, while this interactive tool allows you to check the latest crime statistics for your area: