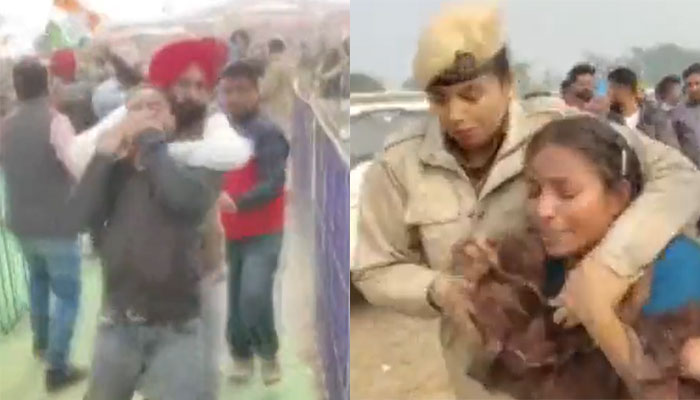 On December 14, unemployed B.Ed TET qualified teachers faced police atrocities at Punjab Prime Minister Charanjit Singh Channi’s Sangrur rally. It is worth noting that wherever CM Channi goes, he encounters strong opposition from unemployed teachers. Police reportedly dragged them out of the pandal at the Sangrur rally when they came face to face.

During the brawl, a teacher identified as Gurjant Singh was injured. During the scuffle, some unemployed teachers lost their turbans. To stifle the protesters’ voice, supporters of CM Channi began chanting “Congress Zindabad” slogans.

‘2-4 people come to disrupt the program’

As CM Channi began his speech on the program, the unemployed B.Ed ETT teachers began raising slogans against him. Upon hearing the slogans, Murray said he knew some people would come to disrupt the program. “It doesn’t matter,” he added. Protesters Gurpreet Singh Khedi and Sukhdev Singh were among others arrested by police. When CM’s convoy reached the village of Ghabdan, he again faced opposition from the unemployed teachers. They sat on the side of the main street in protest and raised slogans against the CM. The police also prevented the protesting teachers from approaching the convoy.

Democracy of Congress in Punjab When the unemployed wanted to raise their voices in front of the CM, you see in the picture the police fell silent. The gang “Bol ki lab azaad hai tere” will sniff a snake on it, just like it was sniffed at the Rajasthan unemployed performance. pic.twitter.com/Imitl3F2hl

Before CM Channi’s convoy could reach Fatehgarh Channa village, some teachers left and sat in the pandal. As CM addressed the crowd from the stage, the protesting teachers, led by Kulwant Longowal, the District Chair of the Unemployed Teachers Union, began raising slogans against the Punjab government. The police present in person pulled the protesters out of the pandal and took them to the next station. Several teachers were also arrested in Fatehgarh Channa village.

The protesting teachers also raised slogans against the CM in Ghabdan village. They said they had been in the Kharar tank for the past two months, but the government was paying no attention to their demands. The administration promised to arrange a meeting between the teachers and the CM by the evening. The meeting took place and CM assured them that they would find a solution at the earliest, but the protesting teachers were not convinced.

There were reports of scuffles between the police and teachers. Somehow some teachers managed to reach the Pandal, where Murray addressed the crowd and raised slogans. The police dragged the protesters out of the pandal. In retaliation, the police arrested Sukhchain Patiala. The teachers present there accused the government of not listening to their demands. They said, “Instead of a concrete solution, whenever we raise our voices, we get batons, false promises and leaflets.” It is noteworthy that several teachers who have been waiting for hiring are over the legal age limit. The government does not plan to relax the age limit and these unemployed teachers are also calling for a relaxation.

Years of waiting without a concrete solution

The bed. TET qualified unemployed teachers have been looking for jobs with the Punjab government for years but have not received any concrete solution. Whether it was former CM Amarinder Singh or CM Channi, no one could remedy them. OpIndia has attempted to reach out to some of the teachers and would provide more details on the matter.