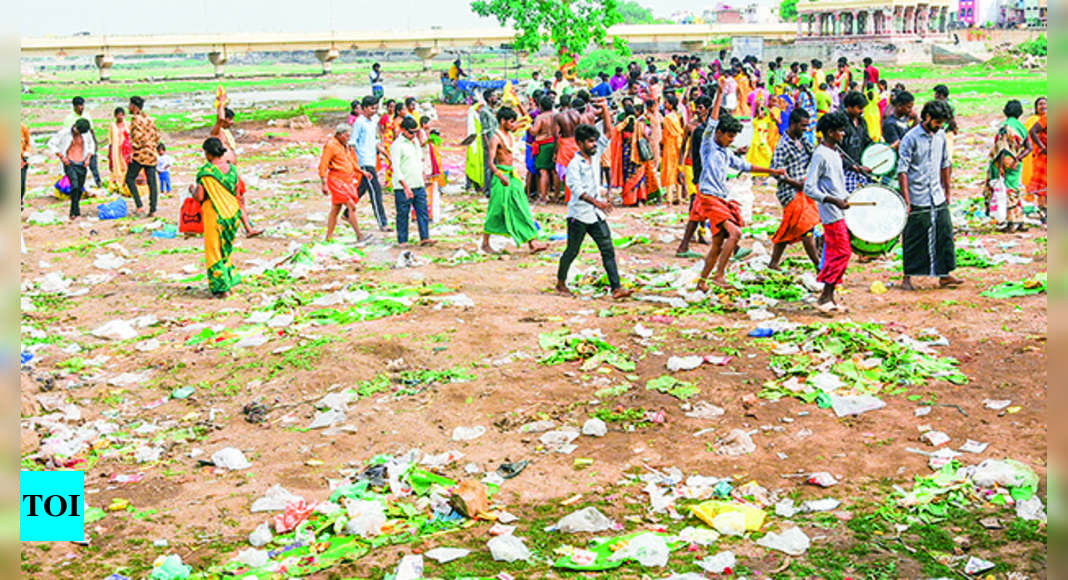 Madurai: As the city is geared up to celebrate the annual Chithirai festival after two years, the city corporation is preparing the river bed and setting up basic amenities for the visiting devotees. Drinking water tanks and mobile toilets have been put up, roads are repaired and street lights are being set up. The mayor and corporation commissioner along with officials inspected the preparation works on Friday.
Some hundred meters away from the river bed, thousands of people thronged Veeramakaliamman temple at Jaihindpuram on Friday. Panguni Ursavam is one of the famous festivals taken for the presiding deity of the temple. The festivities turned the river bed into a dump yard of plastic waste discarded by devotees as they thronged the temple nearby. Hundreds of plastic bags they used to bring pooja items are found strewn along the river bed.
The depressing sight also hinted at what could be expected on the D-Day on April 16 when Lord Kallalagar would descend into the river at the culmination of the events. Mayor V Indirani Ponvasanth and corporation commissioner Dr KP Karthikeyan inspected the spot where the deity will step into the river. The corporation authorities have been putting up bins and deploying conservancy workers for cleaning. But a collective effort from the public is required, officials say. “From our part, we are doing everything to make the festival a success. We appeal to the public to discard all trash in the bins and help the corporation,” added the corporation commissioner