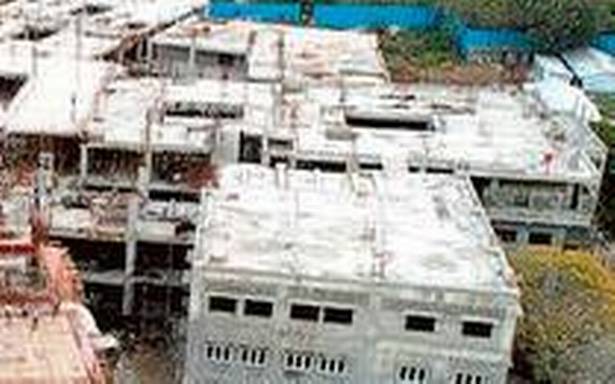 The Center of Excellence for Cancer Diseases coming up on the premises of the Government Arignar Anna Memorial Cancer Hospital at Kancheepuram district may be completed by April.

In a bid to provide comprehensive cancer care and provide training and research pertaining to cancer diseases, the State government proposed to build the Center of Excellence at a cost of ₹120 crore.

The Public Works Department has completed nearly 80% of the work to construct the structure spread over nine acres of land at Karapettai in Kancheepuram district.

The department had submitted a proposal to build four more floors in the pentagon-shaped building that would function as an apex center for research.

Officials said the blocks would have palliative care awards, two facilities for MRI and CT scans, central lab, modular operation theaters, radiation oncology awards, pediatric awards and blood bank. Yoga hall, state-of-the-art kitchen and cafeteria are among the facilities to be provided in the blocks coming up on an area of ​​nearly 3.35 lakh sq. feet

“The new blocks will be more spacious, well-ventilated and have intensive care units added for critical care. At present, 500-bed facility will be ready in two months,” said an official.

Moreover, the department is renovating the wards in the existing buildings of the Government Arignar Anna Memorial Cancer Hospital, which was built in 1969 on land measuring 26 acres. “We are renovating the existing structure and incorporating green building components. There are plans to construct a sewage treatment plant,” the official said.

The department is awaiting the State government’s nod to take up expansion and build four more floors spread over an area of ​​nearly 4.56 lakh sq. ft. of space. Another 500-bed facility would be added.

Once the expansion project is taken up, the PWD proposes to build more wards for palliative care and surgical oncology and pay wards.

The new floors would have a museum and research centre, bone marrow transplant unit, auditorium and library apart from modular operation theatres, the officials added.