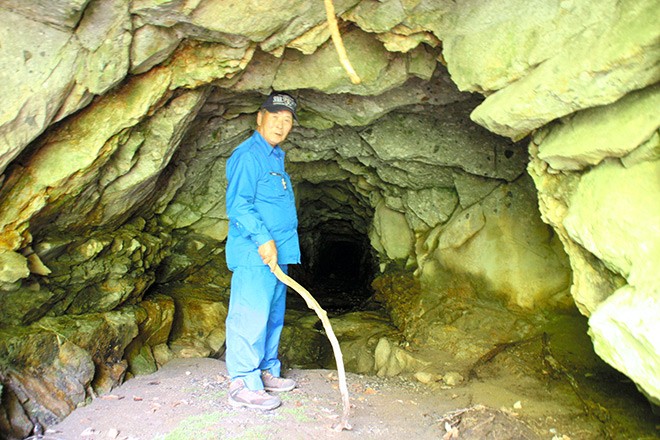 KIRYU, Gunma Prefecture–Kazuma Kamura was a first-year junior high school student when he ran away from home to escape his abusive parents.

He spent nearly three years in a mountain cave with his dog. It was the beginning of an ordeal in the wild that spanned 43 years and eventually earned him the nickname “cave man.”

“I remember one thing after another, but it was hard,” said Kamura, 75, a live-in worker at a support facility for people with disabilities here, in a recent interview.

“I ran away from home in autumn and lost clothes and shoes after six months or so. It was cold and I made a blazing fire in the cave to warm the mud and slept on it. All I had on my mind was finding something to eat.”

Kamura was born in August 1946 in Midori, Gunma Prefecture, as the fourth son of eight siblings. Raised in poverty, he was hardly able to take a bath. His classmates bullied him, saying he was filthy and stank.

Hunger drove him to nibble at whatever food he could find at home. His parents beat him with a wooden stick and forced him to spend the night bound to a gravestone.

Finally, the day came when Kamura couldn’t stand it anymore. He ran away from home, still dressed in his school uniform. He slept alongside railway tracks on the first night.

The next day, he heard a familiar sound. It was his dog Shiro barking. The hound had missed him and went looking for him.

Kamura reached the ruins of the Ashio Copper Mine in a mountainous area in neighboring Tochigi Prefecture, about 40 kilometers from his home, and found a cave to take shelter.

He drank river water and ate anything he could lay his hands on, such as insects, mice, snakes, and even the occasional wild boar, to survive.

When Kamura developed a high fever and felt groggy, Shiro sensed something was amiss and soaked a piece of cloth in river water to ease his discomfort.

But in the third spring after he started living in the cave, the dog died without warning.

Deprived of emotional support, Kamura decided to leave the mountain.

Kamura traveled from one place to another in Niigata, Fukushima and Ibaraki prefectures, living in mountain areas, on dry riverbeds and elsewhere. He sold wild vegetables, herbs and fish he collected.

Feeling his life was worthless, Kamura fell into a black despair and wondered whether suicide was his only way out.

Kamura asked a truck driver to take him to the Aokigahara forest at the foot of Mount Fuji in Yamanashi Prefecture, a famous site for people who want to commit suicide. But he got cold feet when he came across bodies while wandering through the forest.

When he was 57 years old, Kamura had a change of heart about his life in the wild.

In September 2003, he got irritated when a vending machine didn’t return a coin he had inserted and tried to pry it open with a crowbar. Someone called the police and he was arrested.

But a police officer who questioned Kamura took pity on him. The incident made national news and Kamura was given the moniker of “Dokutsu Ojisan” (cave man).

After he received a suspended sentence, a number of people came forward with offers of help.

Kamura did not want to get in trouble with the law and vowed to give up living in mountains or along riverbanks again.

His youngest brother contacted him after learning about his plight. The sibling, two years his junior, helped him move into the support facility for people with disabilities in Kiryu.

Kamura initially mistrusted people and tried to escape as he found it difficult to adjust to a new way of life.

Noriko Yasujima, a staff member at the support facility, repeatedly tried to talk sense into Kamura and stop him from running away.

“It might have been hard for him to trust others at first because he never had a smile on his face,” Yasujima, 69, said. “But now he is much more cheerful.”

A children’s book focusing on his childhood was released in July last year. “Dokutsu Shonen to Inu no Shiro” (Cave boy and Shiro the dog), published by Heart Shuppan, is now in its eighth print run.

“It may have something to do with the widening gap between rich and poor as children’s cafeterias (which provide meals to children from cash-strapped families) have attracted attention in recent years,” author Manabu Haraikawa, 56, said, explaining the popularity of the book.

Kamura confessed that he still felt tempted to spend time alone in a cave every once in a while.

But he realizes he can’t push himself too hard, having suffered a heart attack 10 years ago and underwent surgery for a swollen aorta in his stomach in April.

Asked about how he feels about his life now, Kamura answered with a gentle look on his face: “I can’t live alone anymore. It’s impossible. Everyone is kind to me. I have support from others and feel the joy of living.”