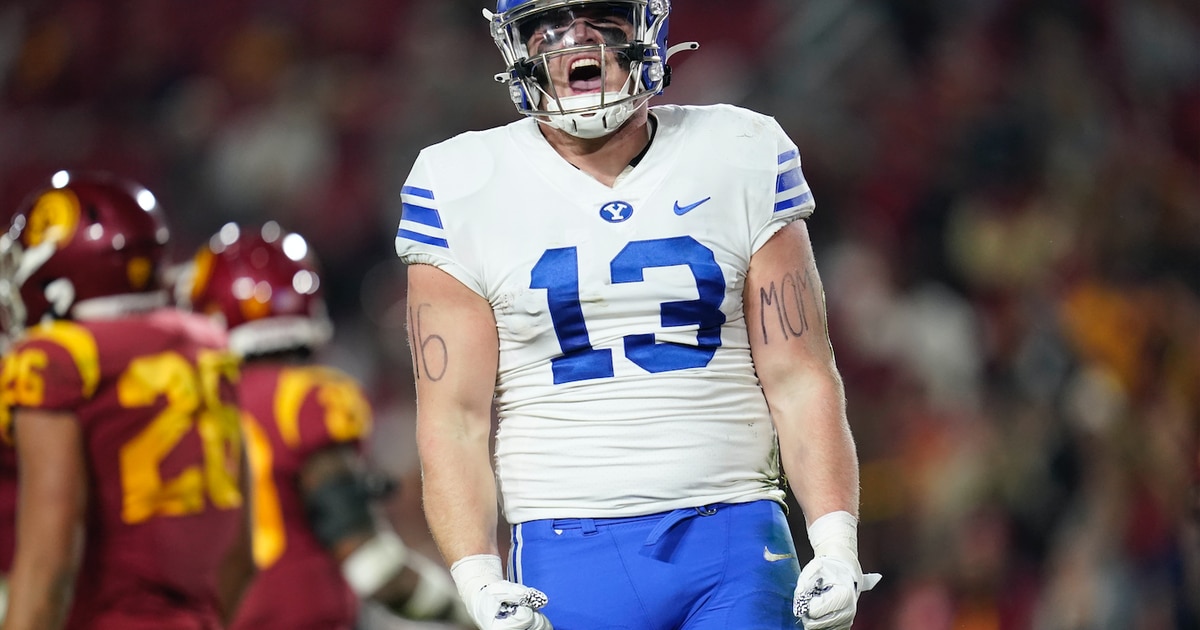 Now that BYU’s regular season has ended, it’s clear what the Cougars have just done has won 10 out of 12 games against a really respectable schedule, with seven P5 opponents including five teams from the Pac- 12 – all of which BYU beat – plus a couple of good G5 teams were remarkable.

It has achieved something important.

It hit a long-running performance that had lasted many years just because it was true. The Cougars wanted to be like an authentic football program of the big league, behave, play, win. They’d always wanted to be in a big conference, not the minors like old WAC and Mountain West, and that was cool and all. BYU had the stadium, the fan base, the brand, the elements that went with the legitimate college football clubs.

But there was also a shadow over it.

In the past 15 years these echoes had gotten a little faint.

Don’t get me wrong. This is not a slap in the Bronco Mendenhall years, or even years before that, under the big name whose name is on the stadium, who trained before Gary Crowton showed up and let loose the wrecking ball on the whole endeavor.

There were some great athletes in that mix and some teams taking BYU football to … well, what it was – an innovative, dangerous team that usually won games it was supposed to win on any given day or every Night a threat to a marquee opponent here and marquee opponent there.

The Cougars could rarely hold out against these teams from the power leagues.

And that’s because they have enough athletes to hang out with Arizona and Utah and Arizona State and Washington State and Virginia and USC. In the past, the Cougars may have stood up for a big win every now and then to defeat a few of those teams, even better ones, but not all. Not bam, bam, bam, bam, bam. Not so.

Skeptics might say that some of these opposing teams hadn’t had years or hadn’t yet settled on the right quarterback, but that wasn’t BYU’s fault. It beat the P5 guys who opposed it, supposedly teams with more, better athletes. And Kalani Sitake beat the coaches who were strategizing against him.

And the cougars have 10 of them. A pair was wrapped in gift paper, prizes won the day they were scheduled. But there was less of it than in the seasons of yesterday and yesterday.

Bottom line is that BYU has turned out to be a full-blown P5 team, not a cute little outfit on the dusty edge of the Wasatch somewhere out there that uses all kinds of imaginations and tricks to temporarily surprise, confuse, and confuse unsuspecting teams beat up.

There were no excuses, no admission of guilt, no newfangled formations. Instead, the Cougars faced the teams they were playing against, and Tyler Allgeier brought them into submission.

There were occasional dropouts. BYU had shortcomings. A defense that revealed weaknesses. An offense that fell inconsistently. BYU did really well against any opponent they didn’t share their first initial with – the letter B. Boise State and Baylor. You saw what happened to the two of them.

But everyone else left the field and stayed behind.

All of this means that BYU looked worthy and was ready to step into the Big 12, which will happen in the not-too-distant future.

For most of their past, even in good times, the Cougars seemed to need a few seasons of renovation to catch up, in case they were ever invited.

Not to say that BYU seems poised to jump to the top of the Big 12 right away.

I’m just saying the cougars are prepared not to be beaten up and hit the rules.

And that really says something.

If BYU had stayed where it was when it hit rock bottom a few seasons ago, a 4-9 season followed by a couple of 7-6 years, an invitation to the Big 12 would have been an invitation to tender will. at least for a while.

Because of the adjustments Sitake has made in the way he trains, recruits, motivates and disciplines and organizes and develops, as well as the upgrades he’s made, the Cougars are in a much better place.

That 11-1 season of BYU, patched up in the face of COVID last year, and the competitive challenges that came with it, all against below average resistance, showed signs of growth and hints, but no one was entirely sure what to make of it except a only truth that Sitake had a talented quarterback himself.

A 10-2 season this time around against a legitimate schedule suggests that there was a lot more going on.

BYU has established itself as an emerging program.

Is it sustainable? Is it final? Will Sitake stay with it even if the offers flow into it?

But as if the most recent past tense were the present, BYU plays real football against real opponents and shakes the doubts from the good years, even the prime years, the national championship year, when the question followed The Cougars so often: Who do they have played?

Anyone who asks that now is reaching for reasons to reject BYU.

The cynicism that once haunted her should no longer haunt her.