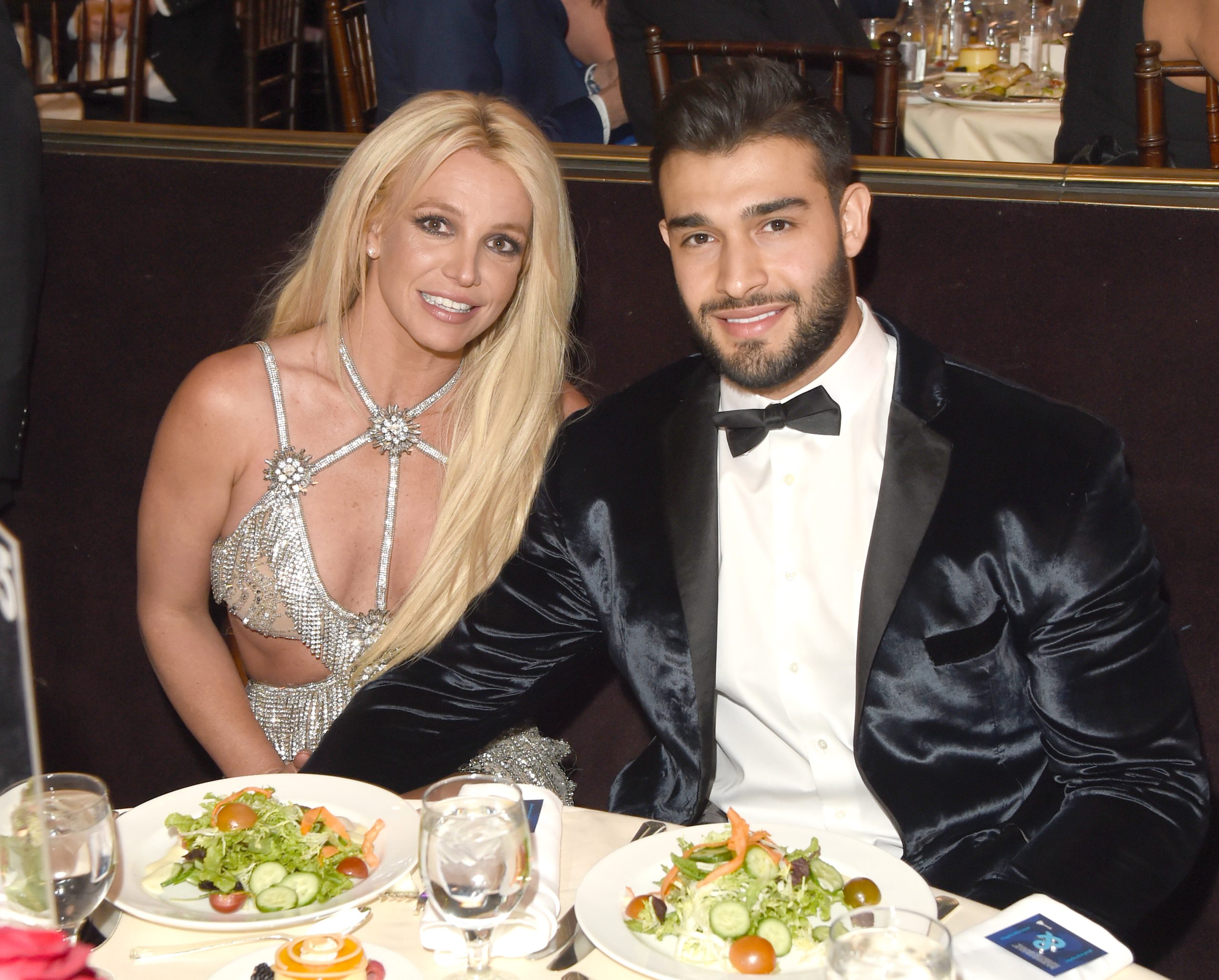 Britney Spears appeared to be topless in bed beside husband Sam Asghari as she once again addressed a viral video of her at a restaurant.

The “Toxic” singer lay next to Asghari as they posted to his Instagram stories, where she explained she was “starving” in the video shot by fellow diners last week.

They added a bunny face filter, a cat emoji and a plate of pasta emoji to the story as Spears sarcastically referenced allegations she was speaking “gibberish” at the restaurant. The video of her at the restaurant was uploaded to TMZ who reported diners told the outlet Spears was yelling and speaking in a way that did not make much sense.

“All right, so the best thing about the TMZ video, to me, personally, I’m starving was the pasta. What if I jumped from one table to the next in the video and I ate the pasta, [and] I got what I wanted,” Spears said to the camera.

Asghari could be heard giggling beside her and saying “like a cat?” and “meow,” when Spears mentioned jumping to the table of the person filming her.

The couple had attempted to dine at JOEY restaurant in San Fernando Valley on Friday, January 13, but left quickly when someone at the restaurant started filming her.

During the video, Spears is seen holding a menu up to her face and Asghari rushes out, which he explained on Tuesday was to get their car so they could leave.

“People get a little too excited to see my wife. So, everybody’s filming, everybody’s doing their thing, but you know how it is. It comes with a territory [of being famous] and I went to get the car to get the hell out of there and people just thought I’d left but that didn’t happen,” he explained.

“So it is what it is man. Because everywhere she goes, someone has a camera and it’s absolutely frustrating,” he said. “It’s like she felt disrespected. You know when you sit down to have a meal and people get their cameras out and start filming you, it’s disrespectful.”

Spears also addressed the original video over the weekend on her own Instagram, where she posted a lengthy caption saying people were talking about her as though she was a “maniac.”

“I watched “NATURAL BORN KILLERS” this morning and damn I got ENLIGHTENED … and HOLY SMOKES S*** BALLS I’m sure I brought a billion SMILES to me LOOKING LIKE SHREK at a restaurant,” Spears wrote, alongside a painting of a girl pouring syrup onto pancakes.

“Even my best friend couldn’t WAIT TO SEND IT TO ME, THEY DON’T THINK TWICE because we are all natural born killers … I know the news is all hyped about me being a little drunk at a restaurant … it’s like they’ll be WATCHING MY EVERY MOVE 👀 !!! I’m so flattered they talk about me like a maniac THEN have the balls to talk about all the negative things that happened in my past !!!” she wrote.

She added: “Honestly it would be safer for me to compliment this world and f*** up because if I become a prophet and don’t create history, we might have something y’all… I’m just KIDDING, but it’s a good thought 💭.

“I know y’all are rooting for me and all and make sure you check out the shocking Shrek picture of me … I was like damn that’s horrific yet there were two pics where I was normal 🤔 … either way honestly I know nobody gives a flying f*** what I do !!! I’m just bored writing this paragraph like a damn idiot 🥱”

Spears had high-profile mental health issues in the early 2000s and lashed out at a photographer in 2007 after venting her frustration at not being granted more privacy.

Following that display her father, Jamie Spears, and her lawyer applied to put her in a conservatorship in 2008 that lasted 13 years.

Spears was eventually released from the conservatorship by a Los Angeles Court in 2021 after giving shocking testimony about the lack of control she had over her own life.

She claimed she was forced on to the medication lithium, which was set up by her own team to appear upset for waiting paparazzi after visiting her therapist and that she was forced to work almost every day on world tours, albums and a long-running Las Vegas residence.