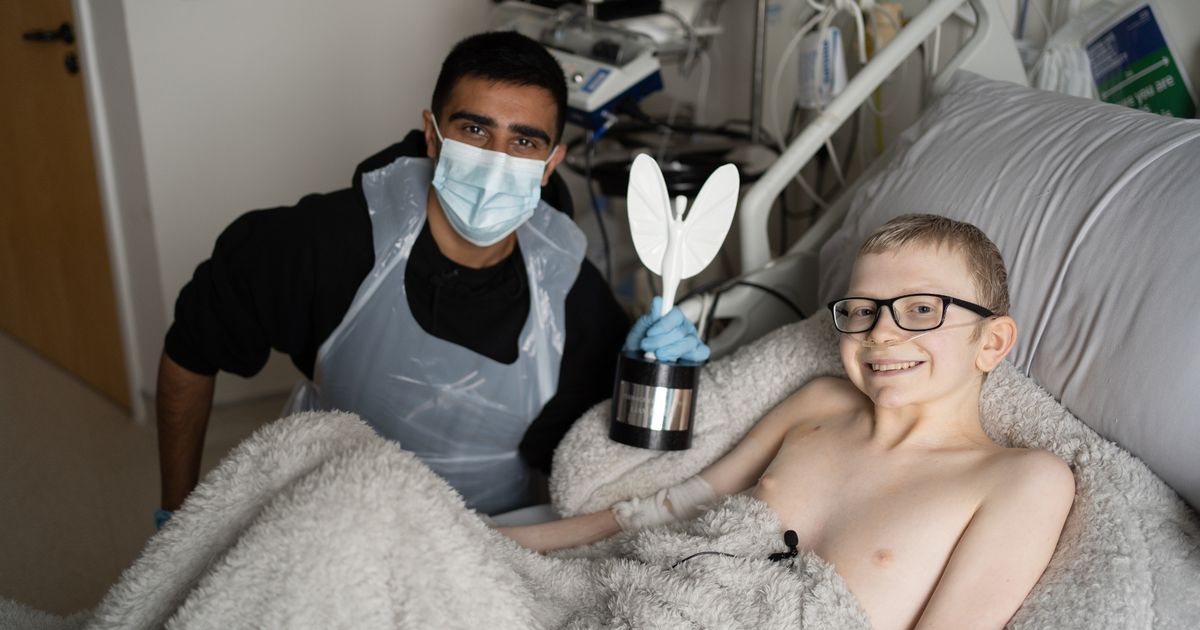 The Pride of Manchester’s Teenager of Courage was presented with his award in a special visit from one of his favorite YouTubers last week.

Liam Preece, 15, was surprised with the award from his bed at Royal Manchester Children’s Hospital, where he is currently undergoing treatment for bone cancer, after he was unable to attend the official ceremony. The Stalybridge schoolboy was recognized for his YouTube channel, which documents his experiences with cancer in an honest and upbeat way.

Speaking to the Manchester Evening News after collecting the gong on Liam’s behalf, Vikram Barn, of the YouTube channel Vikkstar 123, called Liam “fantastic”.

READ MORE: Incredible bravery and immense dedication – the extraordinary winners at The Pride of Manchester awards

“I’m really grateful to be able to come and do this. As someone who he has been able to watch content from while he’s been in hospital, I think it was really important for me to come and make the effort,” he said.

“Especially after the fantastic things Liam has done in putting himself out there, to decide that he’s going to launch his own YouTube channel, and find other people who are going through similar situations and give a positive outlook on it. I think that’s fantastic.

“I’m really grateful to be able to deliver his award to him in hospital. It’s been great also to see his YouTube story and one thing that is quite exciting, is that he can make a video about this whole experience and I will get to be a part of it and for him, hopefully that will be something that he enjoys . I’m looking forward to it.”

Liam was diagnosed with osteosarcoma, a type of bone cancer that had spread to other parts of his body, after suffering knee pain in 2020.

His channel has over 10,000 subscribers, as well as shout-outs from other gamers and YouTubers.

He said: “Having cancer puts you in a panic mode. It’s not like you can get on with your day without thinking about it. I’m keen to help others going through the same ordeal and that’s why I created the YouTube channel.”

Mum Jodie said: “When Liam was very poorly a year ago, I could barely recognize him as my own child. He just looked so pale and drawn. It was very hard. But Liam continues to be brave, happy, smiling and full of wit and laughter. He has kept the whole family going.”

You can watch the Pride of Manchester awards in full on YouTube at 7pm tonight.