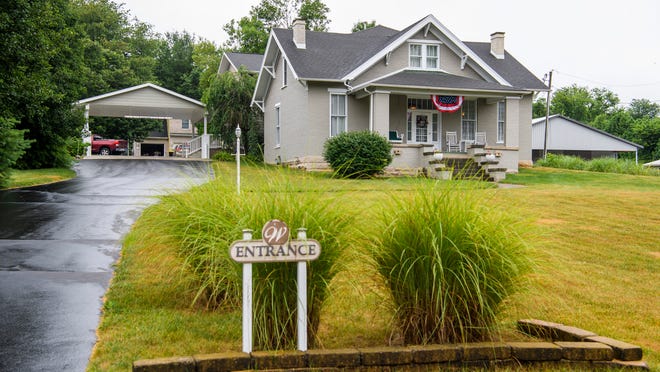 Sally Nicholson always wanted to own a bed & breakfast. Being a hostess was the dream, plus she’s gifted in the kitchen.

Daughter Jessica Kelwaski and her husband, Marc, invest in rental properties and found the Wampler House for sale on Bloomington’s south side. The property is nestled into the lush green foliage hugging South Rogers Street, and when rounding a curve, the historic house sits atop a shallow hill. A white-painted chimney stack became a flower planter in the front yard after a tornado knocked it off the roof in 1917.

However, the Kelwaskis waited to tell Sally. They didn’t want to get her hopes up and find out they fell in love with a house in need of expensive repairs. But they found none, and the numbers made sense.

Not only did the property fit their wish list, but they later found out that Sally’s husband and Jessica’s father, who passed over a decade ago, performed electrical work on the house during renovations in the early 2000s. Jessica’s great-grandfather also used to own a general store across the street, which is now Stella’s Place.

Now, Jessica and Marc’s three little ones run around on the hardwood and carpeted floors and peek around corners. The married couple and their kids live about a mile and a half down the road, while Sally moved into the carriage house behind the bed and breakfast.

“This is like a second home that we’re inviting people into,” Sally said.

Generations of local families have owned the 165-year-old house at 4905 S. Rogers St. Now Sally, Marc and Jessica get to add their name to the roster. The eager new owners hope to maintain its homey reputation while perfecting the details and connecting more with the community.

Heading south on Rogers Street, downtown traffic and crowded storefronts turn to ivy-covered stop signs and frayed, rusty mailboxes. It’s a different side of Bloomington than the one dominated by Indiana University football crowds and police cruiser sirens.

The owners hope locals can look to the Wampler House as a place for a staycation or a nearby night out. It can also be a close getaway to experience a different side of Bloomington. They, of course, are expecting out-of-town folks wanting rooms when IU puts on large events like sports games, graduation and move-in week.

Of the eight rooms, four have balconies looking out into the trees. Many of the rooms have gas fireplaces and two-person jacuzzi tubs. They have common areas including the front porch, the parlor, a library and a board game room.

The Wampler House is considered a boutique hotel, which means they have fewer rooms and are not a chain company. This allows the owners to give their guests a personalized experience, the owners said. Here, this means small things like finding a storage space for bikes and serving a breakfast catered around a food sensitivity.

On weekends, Sally and a few others cook a two-course breakfast in the kitchen. They serve continental breakfast on weekdays. Not only do they want the food to taste good, but they want it to look good, Marc said.

A house with history

When walking into the check-in nook, a few framed photos of previous owners and the house and a newspaper clipping from the ’80s hang on the wall to the left leading upstairs.

The house was constructed in 1857 after David Sears bought the land from the federal government in the late 1820s, according to the Monroe County Public Library archives. The Mathers family took ownership in 1862, and later the Coleman family.

A railroad used to run nearby with a stop for Clear Creek, Marc said, and the house was built close by. That way, supplies didn’t have to be carried far, making life easier since vehicles were yet to be invented.

The house’s name is derived from William and Pearl Wampler. The couple bought the house in 1938 and owned it more than 40 years. Their granddaughters, Diana and Denise Robinson, later took possession and transformed the property into a bed and breakfast. The renovations, occurring from 2001 to 2003, expanded the house’s square footage and added five new bedrooms.

The sisters ran the business until 2015 when Zack and Donna Malham bought the property. They too were fulfilling their dream of owning a bed & breakfast, and they said in a 2016 Herald-Times article they want their accommodations to feel like home. Recent online reviews and conversations about the house talk about the sisters’ welcoming hospitality and tasty breakfasts. They retired and passed the property onto the new owners about a month ago.

While the house is already packed with antiques and history, Sally, Marc and Jessica still want to make their mark. Many returning guests congratulate them on their new endeavor and remember their previous stays fondly.

“We want to kind of keep that going,” Marc said. “but then add in some of our charm to it.”

Whether a guest is new or a frequent visitor, they said they want to offer something different each time. They plan on themed décor changes, including a bicycle themed room in honor of the Little 500 and Hilly Hundred as well as dogwood tree elements.

“We’re trying to bring in some of the Bloomington charm into each room,” Sally said.

Each room is named after different notable families in the community, many of whom are previous owners of the Wampler House. One of the rooms will soon be renamed the Nicholson Room in honor of the Sally and her daughter’s family.

What’s the backup? Why is busy Ind. 46 reduced to one lane each way between Bloomington and Ellettsville?

Rooms can be rented every day of the week, not just Friday and Saturday nights.

Additionally, they hope to kickstart more events for locals to enjoy, allowing people to get to know the property and use the space. Scrapbooking weekends, wine tasting and mother-daughter teas are a few of their ideas.

Sally, Marc and Jessica are opening up the Wampler House from 5:30 to 8:30 pm July 27. Locals can come check out the property and rooms, learn about the history and meet the owners.

Cate Charron is an intern at The Herald-Times. You can reach her over email at [email protected] or on Twitter at @CateCharron.