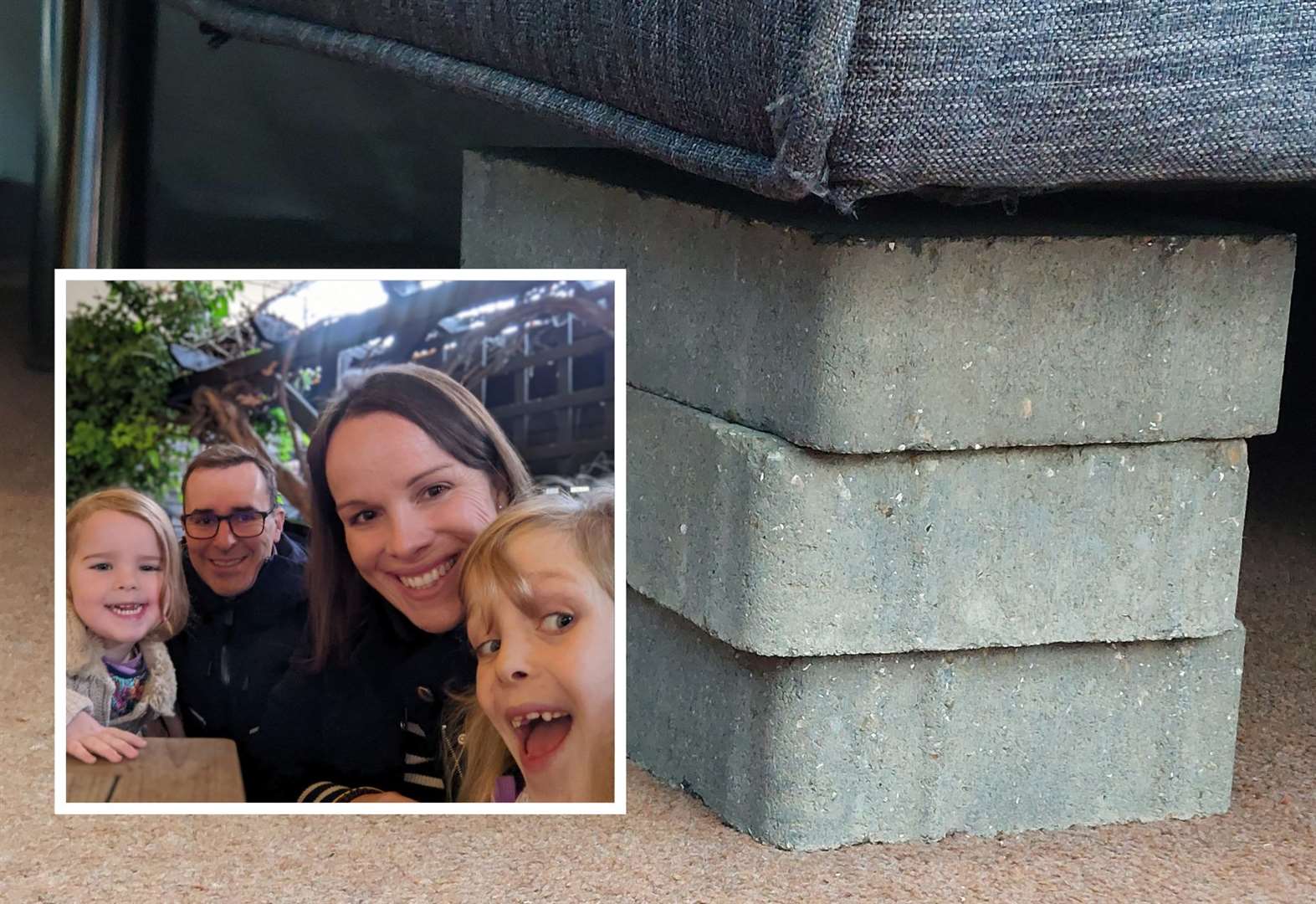 A family have told of their nightmare stay at an award winning Kent hotel – where one of their beds was propped up by bricks.

Shocked dad James Muller says they were made to feel as welcome as a “wet fart” at the Blazing Donkey Country Hotel in Ham, near Sandwich.

Mr Muller contacted KentOnline about his experience and also criticized the popular wedding venue on TripAdvisor, giving it a one-star rating.

But hotel bosses have hit back at Mr Muller’s claims – saying the bricks were a temporary repair after the small sofa bed, meant for children, was damaged by the previous guests.

They also highlight that for every 50 reviews they receive on TripAdvisor, 10 are negative – and they are “very happy with these ratios”.

The family used two rooms for one night on the way to visit friends in Deal, where Mr Muller lived between 2001 and 2015 while working for Pfizer in Sandwich.

On arrival, the family found that the 22-bedroom hotel, which has a three-star AA rating, was busy with a wedding party.

Mr Muller says when they asked to get a drink in the bar, they were told the bar was for wedding guests only.

“Alarm bells should have rung when we tried to reserve a table in the restaurant a week before our visit, only to be told they had no availability due to staff shortages,” he said.

Mr Mullers says he was told the wedding party had paid for the use of the whole hotel – and when they went over to a glamping field outside they were told that was out of bounds too.

“We were clearly as welcome here as a wet fart in a crowded train,” he said.

“We took to our prison cells for the evening and closed the doors and windows in an attempt to partially insulate ourselves from the drum and bass-themed wedding, hoping the kids may get some sleep.”

Nicknaming the venue HMP Blazing Donkey, he added: “At least it’s in a nicer location than Strangeways.”

Mr Muller was also unimpressed by the state of their room.

“The bathroom had tiles missing, handle broken on the bath and a dribble of a shower,” he said. “Window panes were cracked, springs coming through mattress and bed on bricks… yes really!”

At breakfast the next morning, Mr Muller says they were guided to a table away from the wedding guests – but it was a table for two, rather than a family of six.

“I have never experienced such an appalling attitude,” Mr Muller added.

“If you are going to dedicate the hotel to weddings, don’t continue to sell rooms and then fail to provide access to the restaurant and bar you advertise and treat paying guests with such utter contempt and rudeness.”

But hotel director Trefor Squire has defended the business, which was awarded an AA rosette for culinary excellence earlier this year.

Mr Squire told KentOnline young children from another family had been using the sofa bed “as a trampoline” the night before and snapped one of the legs.

The housekeeping team carried out a makeshift repair to avoid inconvenience for the next guests and decided using the bricks was a safe and quick solution.

He said the sofa bed has since been replaced, adding: “I am proud of my staff for acting quickly.”

Mr Squire says the business invests around £75,000 to £80,000 a year in repairs and renewals to the property and has a very high level of occupancy due to the overall quality of the accommodation.

“Our priority is always our guests and clients,” he said. “The hotel and its reputation grows from strength to strength and we have, hitherto, enjoyed an incredible year again.”

So far in 2022, the Blazing Donkey has hosted 82 weddings, including 25 in the past four weeks.

The last three reviews on TripAdvisor regarding weddings give five-star ratings, with one user writing: “Nothing was too much trouble. Every little detail was taken care of.”

Another praises “amazing, kind, welcoming” Mr Squire and adds: “Everyone couldn’t rave enough about the venue and how beautiful it was.”

But three of the four most recent reviews from guests, including Mr Muller, not attending weddings give just one-star ratings.

One user describes: “A dirty and dated room with a broken mattress that felt like it had been there for 30 years!! Headboard was also half hanging on the wall – not the kind of experience you expect for £130 a night.”

Another says: “The staff here have a real ‘I don’t care’ attitude and literally EVERYTHING is too much trouble for them.”

And a reviewer who stayed in July says one of their beds was also propped up by bricks.

Giving a two-star review, they add: “There were wasps nests next to the room and they couldn’t do anything about it. And when my daughter got stung by one above her eye they told us that they didn’t have any ice which was absolutely shocking.

“It’s only when someone went back and demanded that they give us ice did they come back with a cup full for us.”

“Of these around 50 choose to review us on the site on Tripadvisor – of these around 10 comment negatively on our facilities,” he added. “We are very happy with these ratios. FACT.”

The Blazing Donkey dates back to the late 1700s as a farm labourers’ home and was used by local florists for their annual gatherings.

It eventually became a pub but was not a hotel until 1995. Two years later it became the first property in England to be licensed to host outdoor civil weddings.