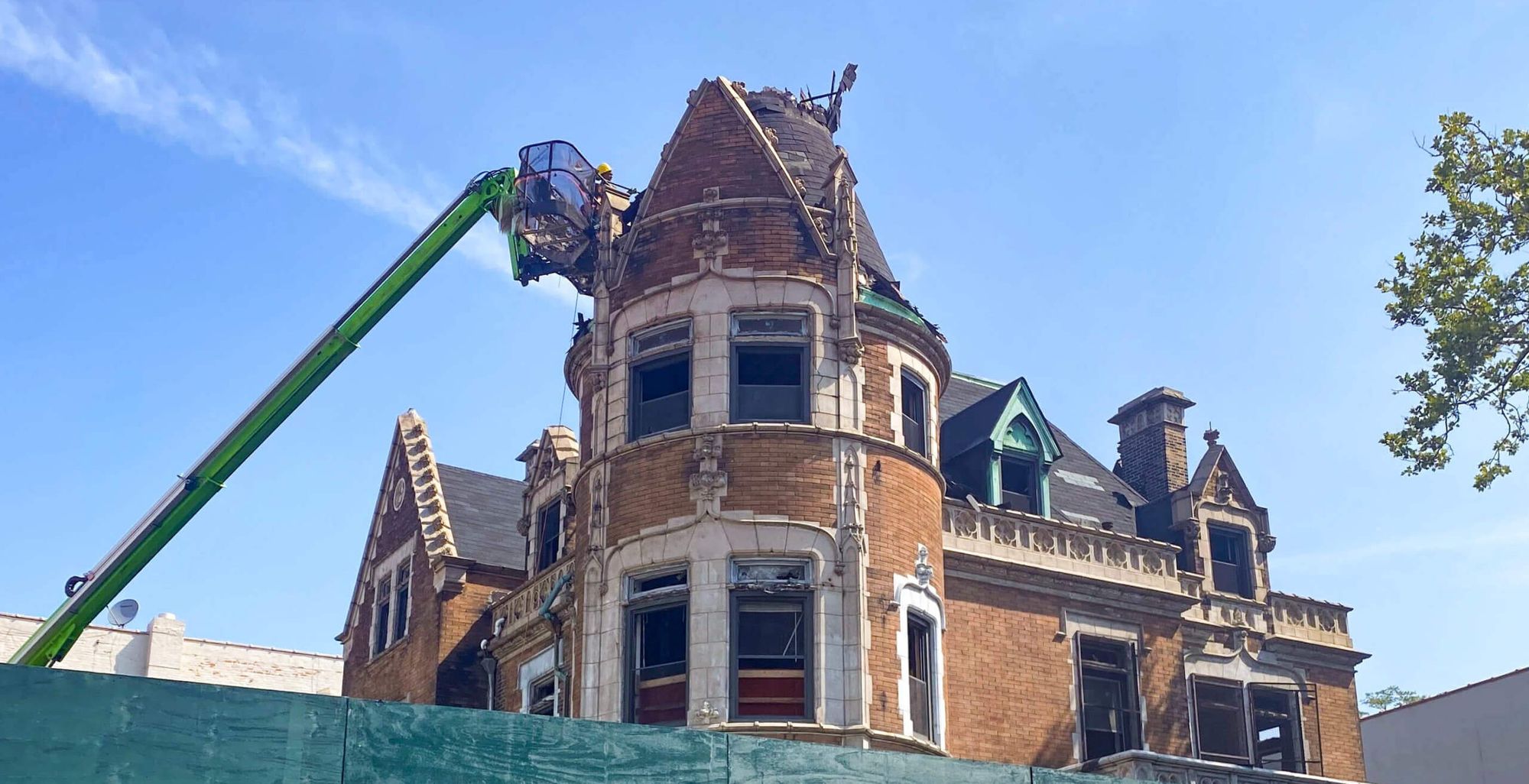 At around 5 pm on a sweltering July evening, Lauren Cawdrey’s phone started blowing up. Her neighbors on Willoughby Avenue in Brooklyn’s Bed-Stuy neighborhood were reporting that windows were being removed from the Jacob Dangler mansion, a Chateauesque-style mansion built around 1900 on the corner of Willoughby and Nostrand Avenues.

Ms. Cawdrey, vice president of the Willoughby Nostrand Marcy Block Association, and her neighbors had been working for months to save the ornate brick-and-limestone house from demolition, ever since they’d heard about plans to raze it and construct a 44 -unit apartment building in its place. In response to residents’ urging, the New York City Landmarks Preservation Commission had decided in June to consider the building for landmark designation, triggering a 40-day period in which the buildings department typically does not issue demolition permits, a Department of Building spokesperson said . Landmarking the building would have protected it from demolition.

At a virtual Landmarks Preservation Commission hearing on the topic on July 12th, more than 70 people had provided written testimony in support of landmarking the turreted building, one of the few Gilded Age mansions left standing in the city. Owned by a masonic organization known as the United Grand Chapter Order of the Eastern Star, it had been used as its headquarters and rented out for events such as weddings and baby showers. The group is in contract to sell the property to developer Tomer Erlich, who is planning to build an apartment building on the site.

The landmarks commission hadn’t yet made its decision when neighbors noticed the windows being removed on July 20; they thought there must be some mistake, Ms. Cawdrey said. They called 311 to report what they thought was an illegal demolition, and went to bed.

The next day around 9 am, residents were shocked to see the demolition beginning in earnest. Workers “were jabbing at it from a cherry picker and shingles were flying all over the place,” said Ms. Cawdrey. Within hours, the mansion had been leveled.

“It was really the crown jewel of this block, and now it’s just a pile of rubble,” said Ms. Cawdrey. “We need some answers.”

On behalf of the LPC, Mayor Eric Adams’s office said in a statement: “A longstanding technological limitation at DOB led to an extremely rare process error that prevented LPC from receiving information on the status of the project’s pending demolition application at DOB…. The developer was therefore able to obtain a demolition permit before LPC was able to hold a designation vote.”

While the demolition caught neighbors by surprise, the seeds of the building’s demise were sown years ago, when the United Grand Chapter says the property was fraudulently mortgaged without its knowledge, according to court documents filed in New York State Supreme Court. Facing foreclosure, the nonprofit group said at the LPC hearing that it had no choice but to sell the building.

When reached by phone, Mr. Erlich said the building wasn’t landmarked at the time of the demolition, and declined to comment further. His attorney, Eliad Shapiro, said at the LPC hearing on July 12th that Mr. Erlich strongly objected to landmarking the building and felt the LPC hadn’t given him enough time to consider what could be done with the building if it was landmarked.

The Dangler mansion was built as a home for Jacob Dangler, a German immigrant who became a successful meatpacker and provisions merchant, according to the LPC. Designed by Brooklyn architect Theobald Engelhardt, the house had 17 rooms and a bowling alley, according to a 1940 ad for its sale in the Brooklyn Eagle. Since 2003 it has been owned by the United Grand Chapter.

The upkeep of the building became more difficult over the years, according to the group’s associate grand matron, Celeste Jefferson, who said at the landmarks hearing that the group struggled to book enough events to cover the costs. “Once Covid hit, it truly destroyed our finances,” she said. When reached by phone, Ms. Jefferson declined to comment.

Ms Watson, Ms Green and Mr Alvarenga didn’t respond to requests for comment. Ms. Green, who now lives in Colorado and is no longer involved with the United Grand Chapter, said in court documents that the loan was approved by the group’s board of directors, and that she knew about the mortgage but received no personal benefit from it .

Stephan Gleich of Gleich, Siegel & Farkas, a lawyer representing Advill Capital, said Ms Green and Ms Watson had the appropriate authority to take out the loan and that the claims of mortgage fraud are an attempt to forestall foreclosure. He added that demolishing the building also violated the terms of the mortgage. The foreclosure case is ongoing.

The United Grand Chapter signed a contract last fall to sell the building to Mr. Erlich for $4.3 million, according to people with knowledge of the transaction. Mr. Erlich has developed a number of residential projects in Brooklyn, including a 7-unit condominium at 221 Devoe Street in East Williamsburg and 825 DeKalb Avenue, a seven-story mixed-use building in Bed-Stuy.

An application for a demolition permit for the Dangler Mansion was filed in March by entities associated with Mr. Erlich, according to the DOB.

At the hearing on July 12, members of United Grand Chapter said they feared landmarking the building would jeopardize the sale and spell financial ruin for the group.

“Should this sale not go through because you landmark the property, we’re going to wind up in bankruptcy,” said Mr. Brandoff at the hearing.

Among those who gave written testimony in favor of landmarking was the actor Edward Norton; Willoughby Avenue had been one of the filming locations for his movie “Motherless Brooklyn.” Supporters say while the building needed some work, it was generally in good repair and was a candidate for adaptive reuse.

If the building had been landmarked, it likely would have been eligible for grant funding to convert it for uses such as a community center, performance space or affordable housing, said Andrea Goldwyn, director of public policy for the New York Landmarks Conservancy. Landmarked buildings have also been adapted for market-rate housing or commercial use, she said.

“It could easily have been rehabbed in a way that would have been given [the developer] a good return on his investment,” said Suzanne Spellen, an architectural historian and columnist for the Brownstoner website.

After the meeting, neighbors were optimistic the LPC would vote to landmark the building, Ms. Cawdrey said. “It seemed like we were so close.”

But the commission hadn’t yet voted on July 17th, when the 40-day moratorium ended. A demolition permit was issued July 19th, and the building was razed on the July 21, the DOB said. Later that day, the buildings department issued a stop-work order due to “a hazardous condition” at the site and improper use of an excavator to perform the demolition, but the mansion was already mostly gone. By the next day, someone had spray-painted the words “More developers, more problems” on the dark- green construction fence surrounding the site.

In reaction to the building’s demolition, preservationists are “just gobsmacked,” said Ms. Spellen. She said she has never before seen a situation where the landmarks commission “let the clock run out like that—either they reject the building or landmark it.”

According to the statement from the mayor’s office, the administration has “taken immediate steps to prevent such issues in the short term,” and is “already developing a permanent technology solution that would ensure an error like this never occurs again.”

In Ms. Zinerman’s view, Mr. Erlich should not have razed the building while the LPC was considering it for landmarking, even if he did receive a demolition permit. “He usurped the LPC’s decision by knocking it down,” she said, adding: “There’s no justification for what he did.” She said she would like to see him prevented from building on the site.

The site has since received 12 violations, including working without a permit and violating the stop-work order, which could carry penalties totaling about $270,000, the buildings department said. Hearings with the city’s Office of Administrative Trials and hearings will determine the penalties, if any.

More: Hunting Dogs Are Included in the Sale of This $12.25 Million Georgia Estate

It is fairly common for historic buildings in New York to be demolished, especially in formerly low-income neighborhoods where real-estate values ​​are now rising, Ms. Spellen said. Often, cash-strapped churches or civic organizations feel they have little choice but to sell their historic buildings to developers, she said. In addition, Ms. Zinerman said properties in her district are vulnerable to deed theft, predatory lending and the like. “You have people showing up at your door pressing you to sell your home,” she said.

The stop work order is still in place, according to the buildings department, although it has been partially respinded to allow debris removal. Neighbors plan to attend a hearing on the violations scheduled for November, said Ms. Cawdrey. “This demolition—it should not be in vain. Something needs to change really really,” she said.