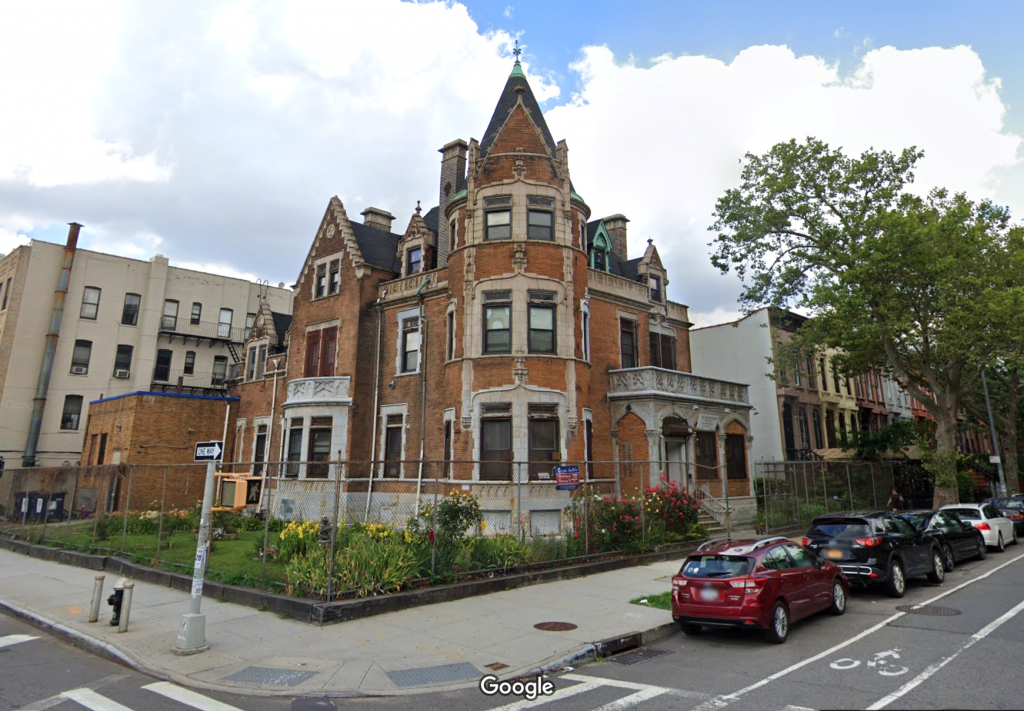 Bed-Stuy residents and public officials are urging the Landmarks Preservation Commission (LPC) to designate a historic mansion as a city landmark to save it from demolition. Known as the Jacob Dangler House, the property, located at 441 Willoughby Avenue, was built at the turn of the 20th century and features a striking French Gothic architectural style. After a developer filed demolition permits, the LPC added the property to its agenda last minute and voted last month to calendar the property, temporarily protecting the mansion. During a hearing on Tuesday, a majority of public testimony was in favor of designation.

The Jacob Dangler House was built between 1897 and 1902 and designed by Theobald Engelhardt for Dangler, an immigrant from Germany who became a successful meats and provisions merchant, according to an official press release.

The house, which sits on the northeast corner of Willoughby and Nostrand Avenues in Bed-Stuy, spans 58 by 85 feet and measures over 12,000 square feet, according to Brownstoner.

In recent years, the house has served as the home for the United Grand Chapter of the Eastern Star (OES), a masonic organization made up of exclusively African American and African Caribbean women.

Supporters of landmarking include elected officials like Assembly Member Stefani Zinerman and City Council Member Chi Ossé, groups including the Historic Districts Council and New York Landmarks Conservancy, and even actor Edward Norton. A representative for the Motherless Brooklyn actor read a statement on his behalf.

“Once a prestigious building like 441 Willoughby is gone, it’s gone from our sight and from our historic record too,” Silvana Tropea, Norton’s rep, said. “And our collective creative capacity is the poorer for it. [The home is] not just a spiritual and aesthetic connection to the past, but as a major city asset which supports the creative production industry in NYC and beyond.”

In addition to the developer, other opponents include OES, which say the organization cannot afford to not sell the property.

On behalf of the OES , Celeste Jefferson spoke in opposition to the house’s landmark designation during Tuesday’s hearing:

“Our fear is that if the property is landmarked, no one will want it because they will not be able to do anything with the building. The building is already in decay, which will only get worse over time with mold, rat infestations, and become a further eyesore for the neighborhood. The result will almost certainly drive our organization into bankruptcy.”

Jefferson continued: “The neighborhood would be better off with a new development, new lifestyle, and new possibilities for the property. If landmark status is granted, it will create a blight on the neighborhood with a ramshackle building on the corner of Nostrand Avenue and Willoughby Avenue that no one will want.”

Dangler’s family maintained ownership of the home until 1967 when it was sold to the masonic chapter. The property’s deed was transferred to the OES in 2003 for $40,000, with the chapter still being listed as the property’s owner today. OES has a $1,525 million mortgage on the property with Advill Capital LLC, according to the Brooklyn Paper.

The property is currently in the process of being sold to developer Tomer Erlich who plans to demolish the structure once he obtains the proper permits. The property’s demolition has passed pre-inspection and the installation of a sidewalk shed and lightning has been granted, according to Erlich.

Erlich plans to build apartments on the site and claims that he would work alongside the community to include affordable housing units and community space. However, no applications for new building permits have been filed with the Department of Buildings (DOB).

The home is currently used for community and social functions, according to a Change.org petition filed by advocates. The petition urges the city to preserve the century-old home because of its iconic design and cultural significance as a meeting place for African American and African Caribbean women.

The next step in the designation process is for the commission to hold a vote and officially decide if the property is deserving of historic recognition. The LPC is set to have its next meeting on July 19, according to the Brownstoner.