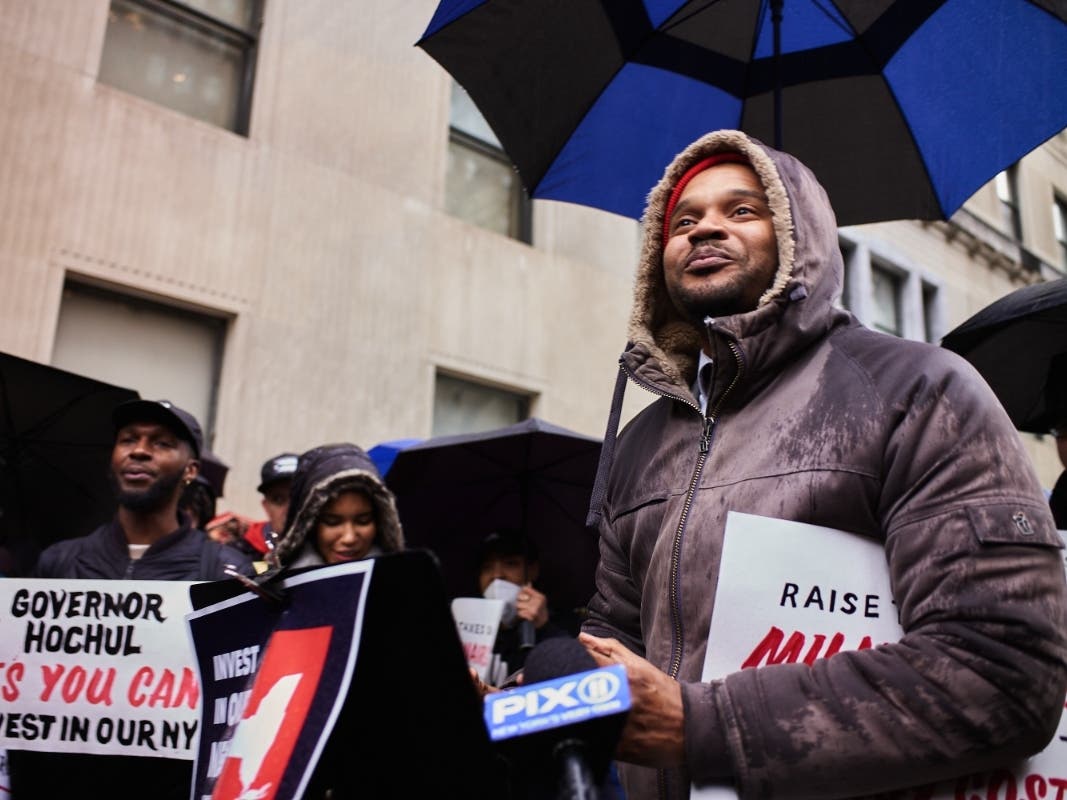 BED-STUY, BROOKYLN — A group of elected officials held a rally outside of a notoriously rich Upper East Side building on Thursday afternoon to call for new state taxes that target the wealthiest New Yorkers.

The rally was organized by a group called Invest in Our New York Coalition and called for the richest to pay what they called their fair share.

Despite the rain, a crowd of at least 50 gathered outside 740 Park Ave., a building famous for its wealthy residents who total, according to the coalition, over $100 billion in wealth inside its walls.

“A little rain isn’t gonna stop us,” Bed-Stuy State Senator Jabari Brisport said, “and neither are decades of trickle down economics.”

Brisport stood in the cold rain alongside other elected officials including Comptroller Brad Lander, uptown State Senator Robert Jackson, Queens Senator Jessica Ramos and Assemblymember Ron Kim as they called for the wealthy to contribute more to state coffers.

Most of the legislators present are currently sponsoring various versions of wealth taxes in an attempt to address “the widening wealth inequality in our state,” said Nassau Assembly Member Michaelle Solages, who is proposing a reformed inheritance, or heirs, tax that, according to the Invest in New York coalition, could raise $8 million per year.

The group claims that the proposed wealth taxes could bring in over $40 billion in combined annual revenue, which could be spent on efforts to boot working-class New Yorkers.

Brisport told Patch that Bed-Stuy is facing a number of issues due to years of disinvestment, and the slew of wealth taxes could make progress in making life better for his constituents.

“Bed-Stuy is historically disinvested in. We as a community deserve full investment, just like wealthier districts,” Brisport told Patch.

He said because of cost of living hikes, Bed-Stuy parents are struggling to pay for childcare and many childcare centers are facing closure due to a lack of funding, in addition to ongoing affordability crises like housing.

By raising more state money, Brisport says there would be more opportunities to invest in Bed-Stuy.

“We need to tax the rich and ensure that working class families can survive,” he said.

The push is part of a larger coordinated effort by states nationwide to address a gulf between rich and poor which only increased during the pandemic.

On the side of Park Avenue, the gathered crowd chanted “hey billionaires, pay what you owe,” as the elected officials explained why the proposed wealth taxes should be included in this year’s state budget.

“Billionaires and multimillionaires in our State hoard wealth while working class New Yorkers are struggling to make ends meet,” said Senator Gustavo Rivera, who is sponsoring a Capital Gains Tax bill that the group claims would raise $7 billion per year.

“Taxing the wealthy is a moral imperative and will enable us to invest in our communities,” he said.