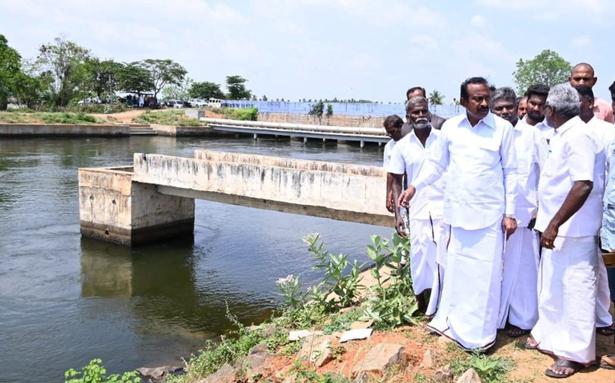 Minister for Housing and Urban Development S. Muthusamy has said that bed-lining of Lower Bhavani Project (LBP) main canal will not be carried out and only side slopes of the canal would be concrete-lined.

The Public Works Department had issued a government order dated November 9, 2020, for extension, renovation and modernization of Lower Bhavani Sub Basin Project System at a total cost of ₹ 933.10 crore. The project was to be carried out in three irrigation systems, LBP canal system, Kalingarayan Anicut system and Kodiveri Anicut system in six packages.

While Packages I to IV is for LBP main canal works, Packages V and VI is for works in Kalingarayan and Kodiveri systems. Work started in 2021 in packages and is under progress. But, a section of farmers oppose the project claiming that concrete-lining of the canal would affect the recharge of groundwater.

On Friday, the Minister inspected the canal at various spots from Thottampalayam in Sathyamangalam taluk to Elathur in Nambiyur taluk where works are to be taken up.

Addressing the media, Mr Muthusamy said that the main aim of the project is to ensure that water is used judiciously and reach the tail-end farmers.

Also, farmers were benefitting from the water seepages from the canal and the project will not affect it. He said that officials were instructed to concrete-line the slopes on both sides of the canal while bed-lining will not be done.

“Breaches in the canal and damages to side slopes will be attended,” he said.

He added that farmers’ opinion will be sought at places where elevation of the land is above the canal for necessary action. “The main aim of the project is to benefit farmers and suggestions have been received from farmers at 140 places”, he added.

The Minister assured the farmers that the canal will continue to help in recharge of groundwater, including farm wells, and added that only renovation works were carried out. “The floor of the canal will not be concrete-lined”, he added.