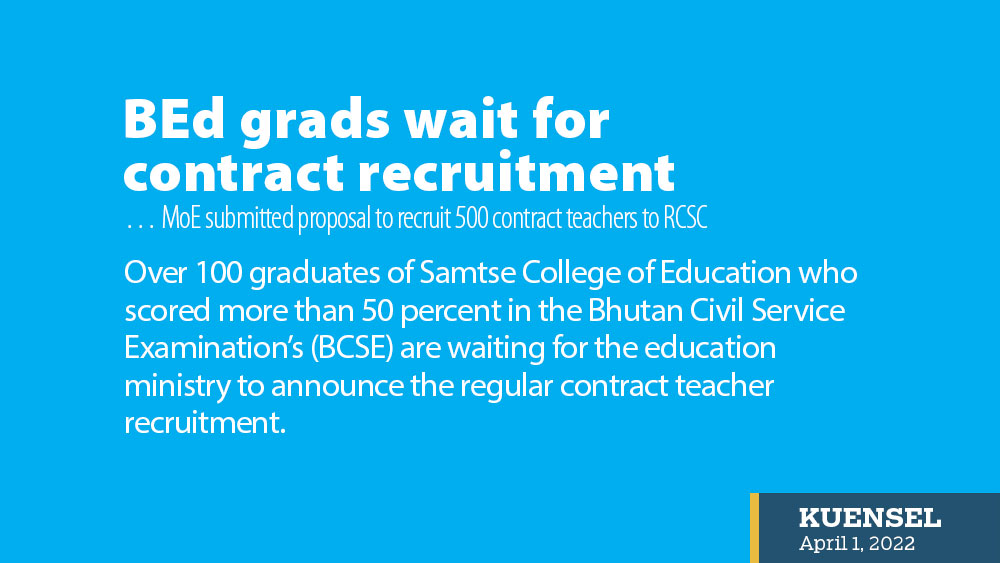 Over 100 graduates of Samtse College of Education who scored more than 50 percent in the Bhutan Civil Service Examination’s (BCSE) are waiting for the education ministry to announce the regular contract teacher recruitment.

The recruitment was also delayed last year due to the delay in the conduct of the BCSE.

A graduate said that it was unknown why there was a delay in the recruitment this time, as the BCSE was held on time.

For B.Ed graduates, the delay in recruitment was concerning as the education ministry had plans to hold the nationwide orientation program for teachers across Bhutan on the National School Curriculum in April.

They said that if the orientation program is held, it should be for regular contract teachers as well.

“While waiting for the recruitment, we’re missing various vacancies and job opportunities,” a graduate said.

Due to the delay, the graduates also wrote to the education ministry on February 5 this year.

In the letter, the graduates appealed to the ministry to expedite the announcement.

Among others, the letter stated that dzongkhags were already announcing vacancies for the National Contract Teacher (NCT) positions. “In previous years, the regular contract teacher announcement came before the NCT, and we expect the same this year,” it stated.

With the delay, in addition to missing NCT recruitment, the graduates were also missing job opportunities as substitute teachers.

A graduate said that with the continuous delay, some graduates were opting to study abroad than get employed in Bhutan. “I have already declined the program officer job to teach because I have the study background in teaching.”

Kuensel learned that with the delay, around eight graduates had already booked a test date for their Test of English as a Foreign Language Internet-Based Test (TOEFL IBT).

The graduates also met the education minister on February 17 this year to discuss the issue.

A graduate said that upon making calls and sending appeal letter, they were assured that the recruitment announcement would be made at the end of February. This, he added was later shifted to March and now to April.

“We just want surety that the announcement would be made and give us a date for it,” he said. This, the graduates said, would help those in the high-risk area and those in dzongkhags other than Thimphu to prepare if they need to come to Thimphu.

According to an education ministry official, under normal circumstances, the announcement for the contract teacher is done in March.

He added that following the recruitment of regular teachers in January, a team from the human resource division usually validates the gap and the shortage faced in the dzongkhag or thromde due to attrition in person with the chief dzongkhag education officers, principals and officiating principals in the months of February and March.

“After the gap has been ascertained, the HRD develops a proposal for accounting for the attrition and the succession planning in recruitment for the following years. The proposal is then presented in the Ministry Human Resource Committee (MHRC) meeting and subsequently after receiving the endorsement from the MHRC, the proposal is submitted to the RCSC.”

After approval from the RCSC, the ministry will make the announcement for the recruitment of the contract teachers.

This year, the ministry submitted the proposal to recruit around 500 teachers on contract to the RCSC.

Kuensel learned that the proposal would be reviewed for about a week.

The education ministry official said that this year, the delay was because of the lockdowns in January, February and mid-March.

Another reason for the delay, he added was because the schools were engaged in conducting the high-stake examination for Classes X and Xll from February 28 to March 12 this year.

“Despite the hold-up, the ministry is still on schedule and can make up for the lost time,” the official said.

The ministry has submitted the proposal for the recruitment of contract teachers to RCSC.

“The ministry will announce vacancies immediately after the RCSC approves the proposal,” the official said.