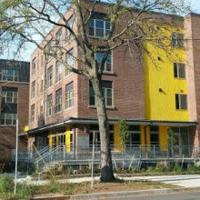 The building at 210 Hancock St. is largely Section 8 subsidized housing, and dealt with a previous bed bug infestation in 2019.

Back then, the bed bugs had originally only infested one apartment. However, after INHS brought in maintenance staff to spray the site, the bed bugs began to spread throughout the third and fourth floors of the building. As a result, the resident says that the previous building manager was fired and there have been annual inspections of all apartments in the building.

Recently, the anonymous resident said he has seen INHS staff spraying hallways, as well as a specialist inspecting sticky traps in the laundry room. However, the resident said that when they were asked to explain what they were doing “they gave vague or even nonsensical answers, like they were checking for insects in general or spraying for spiders.”

The resident added that he had found a bedbug in his laundry room, and that the new building manager told him that “all apartments on the third and fourth floors” would be sprayed “regardless of bed bug status.” In addition, the resident said that “the inspectors failed to change gloves between apartments, or have any foot protection,” — which could be one of the reasons why the bugs have been able to outsmart the inspectors.

Another tenant has said that the bugs are still present on his floor of the building after it was sprayed by inspectors and the bites are continuing to bother his granddaughter.

“I’m confident INHS will continue to mismanage the bed bugs,” the tenant said.

A Rutgers University report on bed bugs in affordable housing in New Jersey found that one in eight low-income apartments had a bed bug infestation and more than half the time residents and building owners were unaware of them.

A total of 26 percent of properties experience bed bug infestations, 12 percent have existing infestations, and more than half of residents (53 percent) weren’t even aware there was an infestation. Even worse, 67 percent of management offices were also unaware of the infestations.

The report continues explaining that bed bugs are common in low-income housing because of management hiring low quality pest control services that use ineffective treatments like “relying on sprays instead of IPM.” IPM stands for “Integrated Pest Management” which involves a number of non-chemical methods “such as heat treatment or freezing, or mattress and box spring encasements,” according to the EPA.

IPM also requires frequent monitoring of the bed bug population in order to evaluate the effectiveness of the treatment and re-treating of the area until no bed bugs are found.

In response, Justina Fetterly, director of community relations, told the Ithaca Times that the health and safety of tenants is the “top priority” at INHS. She added that INHS is working with a pest control company to “safely remedy the situation.”

“The spray is essential to the process and is in no way a risk to tenants’ health,” Fetterly said. “We are working to communicate that to everyone in the building.”

Fetterly added that “all tenants who are receiving treatments can submit a reasonable accommodation request” during the bed bug elimination process. If the request is accepted, INHS will provide them with temporary housing in a local hotel and cover all the costs.

Tenants who are granted an accommodation request will also receive a $20 gift card to help cover the cost of laundry and cleaning supplies. However, according to Fetterly no tenants have yet submitted a request.