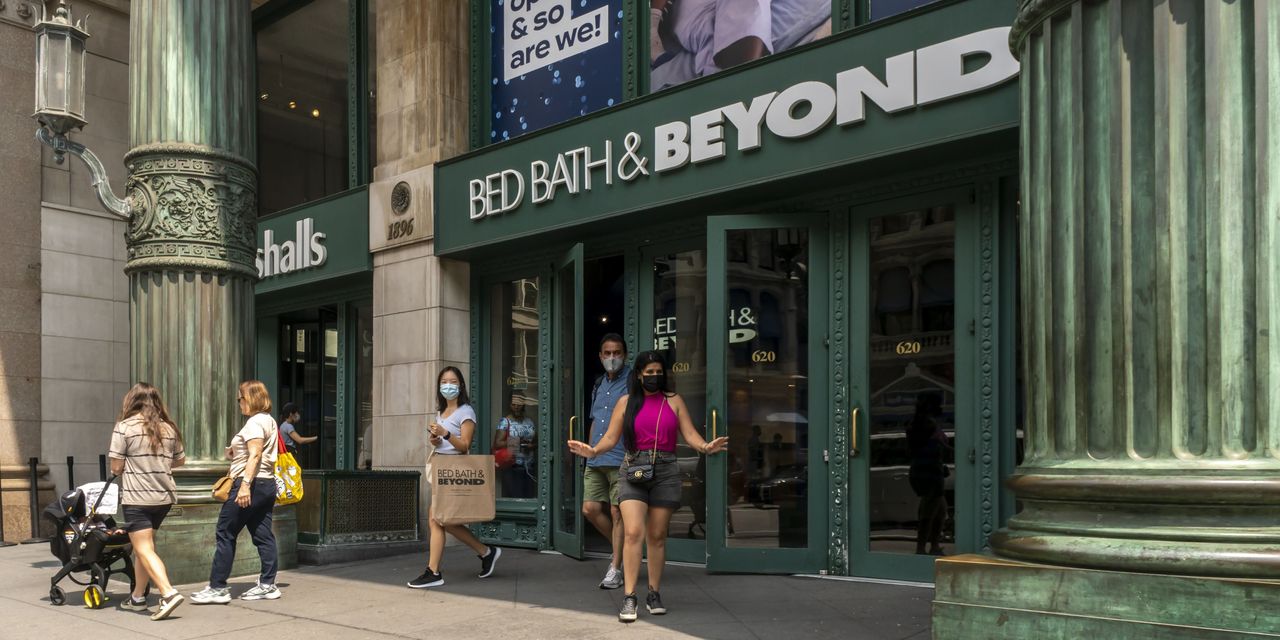 After several months of popular products being unavailable, Bed Bath & Beyond BBBY -7.73%

‘s stores are losing fans. That might not matter for the stock as long as an activist investor keeps his base of retail-investing fans on board.

In premarket trading, Bed Bath & Beyond’s disappointing results, reported Wednesday, were enough to send the company’s share price back down below where they were before billionaire Chewy co-founder Ryan Cohen revealed a large stake in the company. By midmorning, its price had recovered above the undisturbed price before Mr. Cohen, who is also the chairman of GameStop, revealed his stake.

That Bed Bath & Beyond’s stock price didn’t fall further is probably a testament to his stature among the meme stock crowd. Comparable-store sales at the retailer declined 12% in the quarter ended Feb. 26 compared with a year earlier—even worse than the 8.5% drop that analysts polled by FactSet had expected. The company has missed revenue expectations in seven out of the last 10 quarters.

Higher-than-expected freight and shipping expenses ate into the company’s margins: Gross margins of 28.3% were a huge disappointment compared with analyst expectations of 32.7%. Its margins haven’t been that low since the first quarter of the pandemic in 2020. Last quarter was also the fourth consecutive one in which the company was unprofitable.

The company blamed external factors, including snags in the global supply chain, Covid-19 and geopolitical turbulence weighing on consumer confidence. Those excuses ring hollow for a couple of reasons. For one, the quarter-end for Bed Bath & Beyond was just two days after the Ukraine invasion, which means war jitters shouldn’t have been an issue. And those challenges haven’t hampered other home goods retailers: HomeGoods, for example, saw revenue grow 13.1% in its holiday quarter, while Williams Sonoma saw same-store sales growth of 10.8%.

Meanwhile, it is something of a head-scratcher that the company’s executives didn’t do a better job of anticipating supply-chain problems so common in the industry. The company’s moves—to both dramatically reduce product count at cluttered stores while also introducing its own brands—have left it more vulnerable, as The Wall Street Journal reported in January. Major items that were advertised in Bed Bath & Beyond’s circulars were actually out of stock in its stores, Chief Executive Mark Tritton said during the company’s earnings call on Wednesday.

What should investors do? Betting on a true turnaround or a value-creating merger or acquisition requires a lot of patience and faith. The company has said it would invest to upgrade its supply chain, but winning back customers won’t be easy while it does so. Mr. Tritton said the company sees 35 million customers across its business today; as of mid-2021, that number was 40 million.

A financial deal could be possible, but odds of an appealing one aren’t great. A sample of retail leveraged buyouts by private equity compiled by Jefferies, found that those commanded an enterprise value of 7.5 times earnings before interest, taxes, depreciation and amortization on average. Bed Bath & Beyond’s shares today trade at 13 times on the same basis. A longer but more promising shot would be if the company can find a strategic buyer—for some of its real estate or the full company—from e-commerce players seeking a bricks-and-mortar presence to fuel growth. Wayfair, for example, is expanding its physical presence as it faces declining sales.

Meanwhile, a much-discussed spinoff of buybuy Baby wouldn’t be a walk in the park. In a call that Loop Capital conducted with a longtime buybuy Baby senior executive last month, the executive had said the business had lower product margins and higher store staffing compared to Bed Bath & Beyond.

Given the dismal state of the business, fundamental investors would be wise to have “paper hands” and sell.