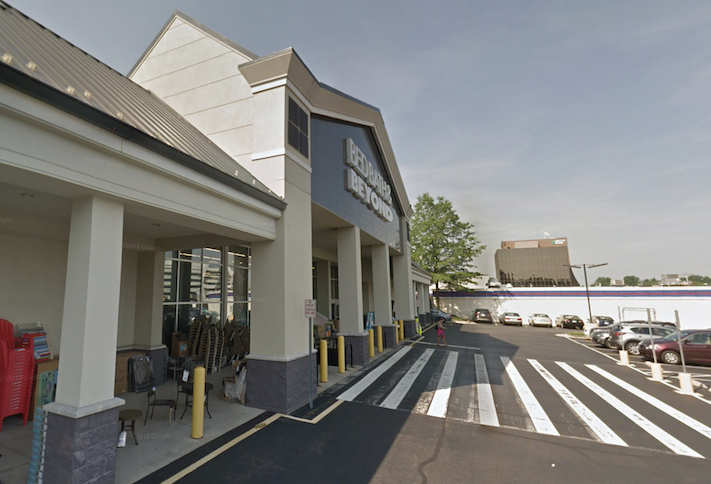 Hundreds of big-box stores across the country are at risk of closing as another major retail chain struggles to stay afloat.

Bed Bath & Beyond’s board removed its CEO last week after it revealed first-quarter earnings that were well below Wall Street’s expectations, with sales down 25% from last year. The company’s stock price has plummeted, losing more than three quarters of its market value since March.

The Bed Bath & Beyond in Tysons, Virginia, one of more than 200 locations that have closed in recent years.

Analysts have raised alarms about its dismal performance, with one calling last week’s earnings report a “dumpster fire.” Loop Capital analyst Anthony Chukumba told Yahoo Finance last week that the company is “in the end days,” as its already dire financial situation is now exacerbated by a wider pullback in consumer spending. He predicted the retailer would go bankrupt in a matter of months.

“We’re now in a much tougher period for retailers,” he said. “This company was in a lot of trouble even when things were good. Now that things are bad, it’s game over.”

Bed Bath & Beyond didn’t respond to requests for comment for this story.

The company leases 27.9M SF of retail space across its 953 stores in the US and Canada, according to its February annual report. If the retailer were to shutter all of its locations, it would deal a significant blow to the retail real estate market — a bigger sudden shutdown than Toys R Us, which closed 700 stores in 2018, and Sports Authority, which liquidated 465 locations in 2016 .

But even if it stays in business, analysts told Bisnow it is likely to close dozens, maybe hundreds of stores as a way to cut costs, meaning either outcome would lead to more pain for a sector that faces growing economic headwinds.

The US retail market has been making progress in its recovery from the pandemic, with nationwide net absorption for the 12 months ending March 30 reaching its highest level since 2017, according to JLL. That demand filled empty spaces across the market, but the vacancy rate is still much higher in the mall and neighborhood center segments — 8.1% and 6.9%, respectively — than the 2.7% rate in the general street-level retail segment, according to JLL .

The tailwinds that had been helping the retail market recover slowed last quarter, as fears around inflation and a looming recession led to a drop in consumer spending. US retail sales in May fell by 0.3%, the first drop in five months, according to Commerce Department data reported by Bloomberg.

When consumers tighten their budgets, retailers that carry essentials like groceries tend to outperform those that depend on discretionary purchases. This dynamic could put Bed Bath & Beyond at a disadvantage compared to some of its competitors like Target, which have more broad selections, said Gautham Vadakkepatt, the director of the Center for Retail Transformation at George Mason University.

“With Target, the groceries can drive people coming to the store to buy other things, but Bed, Bath & Beyond doesn’t have that luxury,” he said. “And in more recessionary times, you’re going to see people cut short on all these things, so they’re going to hurt more.”

The home goods retail segment was better-positioned than most during the pandemic, as people spent more time at home and used savings and stimulus checks to spruce up their living areas. But Bed Bath & Beyond was unable to take advantage of that trend, Chukumba said.

“Suddenly everyone was working from home, leaving cities to buy big houses, and educating kids from home, but one retailer that didn’t benefit from those pandemic tailwinds was Bed, Bath & Beyond,” he told Yahoo Finance.

Bed Bath & Beyond has closed 207 locations in recent years as part of a “store fleet optimization program,” according to its latest annual report. Seventy of those stores closed in the 12 months ending Feb. 26.

A former Bed Bath & Beyond store in Columbus, Ohio, that now sits vacant after it closed in late 2020.

Along with its release of the earnings last week, Bed Bath & Beyond’s board announced it had replaced CEO Mark Tritton, who joined in 2019 from Target, with interim CEO Sue Gove. On its June 29 earnings call, Gove praised Tritton for his leadership during the pandemic, but she said the company needs to improve.

“Our results are not up to our expectations nor are they reflective of our potential,” she said on the call, according to a Seeking Alpha transcript. “Like many of our retail peers, Bed Bath & Beyond is facing a difficult macro environment. However, even during these periods of industry-wide challenge, our shareholders, associates, customers and partners all expect more from us and I couldn’t agree more. We must deliver better results.”

Gove is betting on her ability to deliver. She bought $230K worth of Bed Bath & Beyond stock in a July 1 purchase that sent the share price rising when it was revealed Thursday, Insider reported.

On the earnings call, she said the company is taking immediate action to improve its financial performance by clearing its excess inventory, which could generate more than $500M in cash, and it plans to reduce its capital expenditures by at least $100M.

This investment reduction will likely mean a slowdown in its efforts to renovate stores. A major part of Tritton’s strategy to improve the retailer’s performance was a $250M effort to remodel 450 stores, CNBC reported. It completed 80 renovations last year, it said in the earnings report, including its 92K SF flagship store in Manhattan’s Chelsea neighborhood.

The company’s stores are “predominantly” in the 18K to 50K SF range, it said in the annual report. The states where it has the most stores are California with 87, Texas with 76, New Jersey with 70, Florida with 69 and New York with 60.

The company’s namesake stores are the most at risk. Its Bed, Bath & Beyond stores experienced a 27% drop in sales during the company’s first quarter, which it defines as the three-month period ending May 28, while the baby brand experienced a single-digit decline, Chief Financial Officer Gustavo Arnal said on its earnings call last week.

Investors have called for the company to sell the more valuable Buy Buy Baby brand as a way to shore up its financial position. Gove said on the earnings call that its strategy committee has been “evaluating the potential” of the brand, and they didn’t rule out a sale when asked by an analyst.

The previous 207 closures have largely been the namesake brand, and the company said in its earnings report it “may also determine that additional store closures are warranted in the future.”

“I wouldn’t be surprised if there are another 100 stores that get closed, not necessarily this year, but over the next two years, given where sales are,” Telsey Advisory Group’s Cristina Fernandez told Bisnow.

Fernandez said she thinks the company has enough runway to get through this year’s holiday season, given that it has stockpiles of inventory that it can sell and doesn’t face a major wall of debt maturities this year. But she isn’t ruling out a potential bankruptcy.

“Is it a possibility? Yes, perhaps in 2023,” Fernandez said. “I just don’t think it’s going to happen this year. I think they have a few quarters to stabilize the business.”

The stores that would be most likely to close under this scenario, she said, are not only the worst-performing locations, but also stores with lease agreements that are easier to get out of, and ones that have nearby locations that could absorb their customers .

If Bed Bath & Beyond does close around 100 more stores, the landlords given the keys would be left in a bind, but she said it wouldn’t be nearly as bad for the real estate industry as a full bankruptcy.

“It shouldn’t completely derail the retail market,” she said. “I’d say there are other retailers out there like grocery that could take some of these boxes. … One hundred stores is definitely negative, but it’s more manageable. When you get into many hundreds or thousands, that becomes a bigger problem.”

Seth Basham, an analyst at Wedbush Securities who covers Bed Bath & Beyond, said he does see bankruptcy as a risk the company faces, but he pegs its likelihood at less than 50%.

He still thinks there are steps the retailer can take to course-correct, but he was disappointed by his latest earnings report — and also expects more closures in the future.

“They’re in a very tough spot right now because the consumer is not seeing the value proposition that Bed Bath is offering, so that’s driving really weak traffic and really weak sales,” Basham said. “The business is unsustainable if they continue to drive 20% type same-store sale declines.”

GMU retail professor Vadakkepatt said he doesn’t expect Bed Bath & Beyond to go out of business, but foresees “pruning” of more stores.

He downplayed a broad impact on the retail market, but he said the likelihood that the retailer would close the worst-positioned stores means the landlords of those properties could have a difficult time backfilling the space.

“Those are already underperforming areas, so what happens there is a big question mark,” he said. “It’s not just about Bed Bath & Beyond but the economic conditions in that particular locality have caused low foot traffic, so it might be declining areas in general, which may cause real estate companies to find it hard to replace them.”