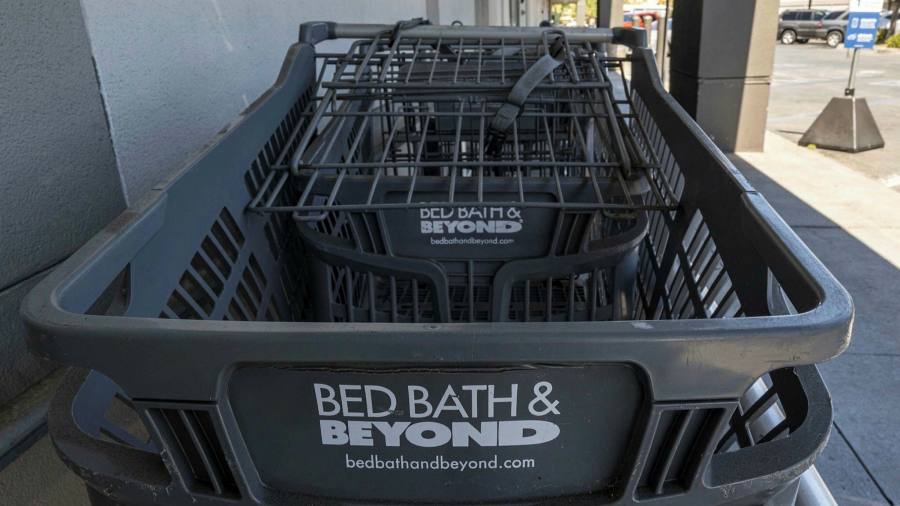 Bed Bath & Beyond has ousted its chief executive after the US home goods retailer posted another decline in quarterly sales, in news that knocked its stock price down more than 20 per cent.

Sue Gove, an independent director, was appointed interim chief executive to replace Mark Tritton in one of several leadership changes. Tritton, formerly chief merchandising officer at Target, joined Bed Bath & Beyond in 2019 and led efforts to reform its business.

The company, which has previously come under pressure from activist investor Ryan Cohen, said on Wednesday that the changes would enable it to “focus on reversing recent results, addressing supply chain and inventory and strengthening its balance sheet”.

Neil Saunders, managing director of GlobalData Retail, warned that the New Jersey-headquartered group was “sinking in a sea of ​​red ink”, noting that its liabilities exceeded its assets by $220mn.

Net sales for the first quarter that ended in May declined 25 per cent year-on-year to $1.46bn, missing analysts’ expectations of $1.5bn. The company blamed the drop on falling demand for household goods and a challenging macroeconomic environment.

The company reported a net loss of $358mn in the quarter, worsening from $51mn a year earlier.

“In the quarter, there was an acute shift in customer sentiment and, since then, pressures have materially escalated,” Gove said in a statement. “Our first quarter’s results are not up to our expectations, nor are they reflective of the company’s true potential.”

The retailer’s bed, bath and kitchen categories, which account for about half of its revenue, declined in the double digits in the past three months, chief financial officer Gustavo Arnal said on a call with analysts.

The company said late-to-arrive orders were met with “sharply lower demand”, leaving it with higher than expected inventories, which it will attempt to clear.

The retailer said his plans to address inventory challenges would result in improving comparable sales in the second half of the year, adding that it hoped to reduce capital expenditures by $100mn by pausing remodels and store openings for the rest of the year.

This year, the company struck an agreement with Cohen that allowed three members of Cohen’s firm, RC Ventures, to join the board and created a committee to explore alternatives for the company’s Buybuy Baby chain.

Gove told analysts that the committee’s work “evaluating the potential of the business” was ongoing, but that “we know there is interest”. The company said comparable sales at Buybuy Baby were down in the first quarter but that market share remained stable.

“In our view, while selling Buybuy Baby will provide some short-term relief it is really akin to sticking some Band-Aids over holes in the main Bed Bath & Beyond business,” Saunders said in a note, adding that economic macro factors did not explain the company’s “incredibly dismal performance”.